Review: The Night Of Overcomes Bad-Girl Clichés to Tell a Powerful Story

A college kid borrows the family car to go out for a night of partying—but the family car is a New York City cab, and its Off-Duty light is malfunctioning. Before he knows it, the kid’s saddled with a passenger, a beautiful young woman who feeds him drugs, plays knife games with him, and eventually takes him to bed. When our hero wakes up, the girl’s been stabbed to death; he grabs what appears to be the murder weapon and drives off.

This is the chaotic night from which HBO’s new eight-episode miniseries The Night Of, whose Sunday premiere is available online now, takes its title. It’s a night whose early events at first unfold with the logic of dreams, or drugs. It continues through a police-precinct sequence that’s the darkest sort of comedy, as our hero gets pulled over for DUI and ends up watching police try to crack a case in which he was so intimately involved that he holds the murder weapon. It’s a credit to the series that its way of reimagining how to tell a crime story—mostly—manages to outweigh a premise unimaginatively programmed with familiar tropes around gender. The death of a fast-living bad girl is a dull cliché, unlike everything that follows.

But then, it’s unsurprising that the show quickly transcends its inciting incidents: As depicted earlier this year in FX’s The People v. O.J. Simpson, the identity of the victim has a certain tendency to fall away in the pursuit of justice. We’re left following the living, though they are in many cases only barely: We follow Naz (Riz Ahmed) from his taxicab into the depths of Rikers Island, where he scrabbles to survive, with the help of a jailhouse kingpin (Michael K. Williams) are riveting. Meanwhile, other plotlines track Naz’s family, whose livelihoods and education are cast into jeopardy by the case’s publicity. There’s also the detective (Bill Camp) on a quest to pin down the case against Naz, and the precinct-crawling defense attorney for whom Naz’s case is a potential reputation rehabilitator.

As a crime drama in the vein of a more sprawling Law & Order or a less philosophical True Detective, The Night Of succeeds wildly. Its opening credits, depicting the arteries of New York City from above, feels appropriate for a show that uses an entire city of strivers and oppressed as its canvas. The performances are just right across the board, veering at every turn towards peculiarity. As Naz, Ahmed (familiar from Nightcrawler and soon to be seen in the next Star Wars film) is watchful and guarded, showing how jail doesn’t so much punish criminals as create them. While I’ve been reticent to embrace pop culture’s recent true-crime boom, the virtues of crime fiction as a way of addressing the justice system’s shortfalls are obvious, here, as Naz throws away his humanity to get by. Williams’s character gives him a copy of The Call of the Wild, and it’s fitting—Naz, who feels things more deeply than he’s equipped to articulate them, is striving to be less human.

Meanwhile, defender Jack Stone (John Turturro) fends off both rival attorneys seeking Naz’s case, the prosecution, and an all-too-human itch. Stone’s struggle with psoriasis, which has pushed him to the point where he can’t wear proper shoes, becomes something more than a quirk—one of his triggers is a cat he feels too much misguided mercy to get rid of. (The Stone role was created by collaborators Steven Zaillian and Richard Price for the late James Gandolfini, who’d have brought a different sort of energy; in the version we got, Turturro’s edgy irritation is perfect.) Other attorneys, including Amara Karan’s Indian attorney brought onto Naz’s case to relate to his Pakistani parents, and Jeannie Berlin’s prosecutor, more bemused than crusading, paint a complicated picture of a justice system that seems bent on devouring Naz whole.

This level of detail makes it a bit frustrating that whole series kicked off with a carelessly constructed sequence. Though we’re never shown exactly what happened to Andrea (Sofia Black D’Elia), we’re meant to believe that Naz is not guilty for one reason or another. Either he outright didn’t do it, or (unlikely but possible) he somehow was so intoxicated by the drugs his ensorcelling victim gave him that doesn’t recall killing her. That we can’t say with absolute certainty that Naz is being wrongfully accused lends The Night Of moral ambiguity, but does so over the dead body of one of its characters.

I was reminded of the dead prostitutes in True Detective’s first season; certainly The Night Of finds more for its female characters to do than did that series, but the show tries its utmost, in those opening minutes of knife games and eagerly proffered drugs, to convince you that Andrea is dooming herself. So much else on The Night Of feels new that one eventually forgets we’re seeing this whole tapestry because of a girl portrayed as essentially complicit in her own death; the ends do eventually justify the mean-spirited beginning. But if, like True Detective, The Night Of becomes an anthology franchise for HBO, perhaps #TheNightOfSeason2 could feature a wrong-place-wrong-time story that’s wrong for reasons other than a profligate woman endangering an innocent.

Or, at least, he certainly seems innocent. HBO has a likely hit on their hands, and I’ll be among what I’d predict will be many millions tuning in August 28 for some closure. But much as the way Naz got into the legal system doesn’t really matter, neither does the fact of whether or not he nominally gets out. The triumph of The Night Of is showing us the ways in which incarceration changes a person, changes that will likely continue once he’s freed into a world of very few prospects. It’s not about one night—it’s about endless unlit, violent days. 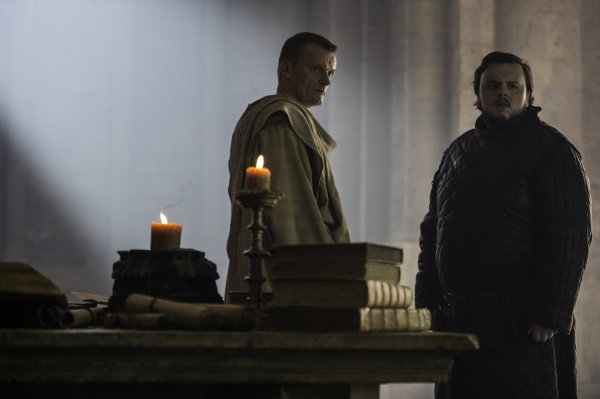 This Game of Thrones Finale Scene May Be the Key to How the Series Will End
Next Up: Editor's Pick