When it premiered on NBC in 1966, Star Trek was revolutionary in its diversity. Featuring a Japanese-American helmsman (George Takei) and a female African-American communications officer (Nichelle Nichols) among its core characters, the show presented a multicultural vision of the future that was unprecedented in network television. But just as progressive as actually making the show diverse was its nonchalance about this vision, presented without scandal or fanfare.

To the disappointment of many fans, the show’s inclusion did not extend to LGBT characters, even as it blossomed into a major franchise over half a century. That fact is set to change with the release of Star Trek Beyond on July 22, in which it has been revealed that Hikaru Sulu, played by Takei in the original series and by John Cho in the most recent big-screen trilogy, will be gay.

Cho says the decision to reveal the sexual orientation of the character, who has never had any explicit romantic attachments (though his daughter was introduced in the 1994 film Star Trek Generations), was made by writer Simon Pegg and director Justin Lin. It is meant, in part, as a tribute to Takei, who came out as gay in 2005 and has since become an advocate for LGBT rights.

In a way, revealing Sulu to be gay in Beyond is a continuation of the franchise’s treatment of diversity as a non-issue. As Cho told the Herald Sun, “I liked the approach, which was not to make a big thing out it, which is where I hope we are going as a species, to not politicise one’s personal orientations.”

For many, the news is simultaneously welcome and alarmingly late, especially given the show’s progressive track record. The show was among the first to depict an interracial kiss, in the 1968 episode “Plato’s Stepchildren,” a decision which sparked a backlash, Takei has said, that made creator Gene Roddenberry fear that too much envelope-pushing could backfire and leave him without a show at all. This fear contributed to the lack of LGBT representation during Roddenberry’s tenure, though he had apparently been planning to add an LGBT character to Star Trek: The Next Generation before he died suddenly in 1991.

It’s also possible that the idea that the series’ universe transcends race and sexuality may have created a situation in which addressing the issue felt unnecessary to its helmers. Roddenberry’s son Rod told Wired in 2013, though he conceded that it sounded a bit like a cop-out, “I mean, there were interspecies relationships on Star Trek, so we’re just beyond the point where homosexuality is an issue.”

But as Devon Maloney wrote in that story, a thorough look at the franchise’s record with regard to LGBT representation, “The invisibility of gay characters isn’t neutral; it’s negative.” At a time when only 36 percent of studio movies pass the Vito Russo Test—a litmus test for whether LGBT characters are not only represented but presented as complex people rather than thin stereotypes—visibility is critical.

The question now is not only how Sulu’s sexual orientation will play out in Star Trek Beyond, but whether this decision might also bode well for LGBT representation in the reboot of the Star Trek show airing on CBS All Access next year and produced by Rod Roddenberry. The treatment of sexuality in the series’ character development may well be a non-issue—as important as Sulu’s love for botany or fencing or his daughter—but the visibility of rich LGBT characters is an issue, and one worth monitoring closely. 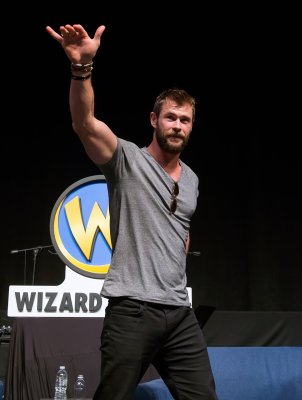 Chris Hemsworth Teased an Intriguing Clue About Thor: Ragnarok
Next Up: Editor's Pick