Everything You Need To Know About Andrea Leadsom

In a Conservative Party leadership race that has featured twists and turns worthy of an HBO drama, a little-known Energy Minister named Andrea Leadsom has emerged as one of the two main candidates vying to be the U.K.’s next Prime Minister.

After a ballot of Conservative MPs on Thursday, the 53-year-old came out ahead of Justice Secretary Michael Gove as the main rival of frontrunner Home Secretary Theresa May. The two will now face a vote by the party’s membership, due to be completed early September. Whoever wins will lead the party, and the country.

Leadsom, who has portrayed herself as an anti-establishment figure, now represents the pro-Brexit wing of the party against May, who quietly backed Remain. She benefited from the fall-out of Boris Johnson’s dashed leadership aspirations at the hands of his former Brexit-ally Gove, as the popular former London Mayor gave her his backing. Leadsom began to gain votes from Johnson supporters such as Leave campaigner and former cabinet minister John Redwood. Other supporters include former party leader Michael Howard, and Northern Ireland Secretary Theresa Villiers.

She became the darling of the Vote Leave campaign during televised referendum debates before the June 23 vote. Leadsom won praise for building a softly spoken patriotic argument, spelling out her dreams of Britain creating free-trade agreements with the world, and expressing aversion to the E.U.’s free movement of people.

Leadsom and her two sisters were raised by their single mother, after her parents divorced when she was four years old. She went on to study political science at the University of Warwick before beginning a long career in the City of London, Britain’s financial center. It was during her 10-year stint at Barclays when she met her husband Ben and, she says, became the bank’s youngest ever director at the age of 32. According to her website, she helped the then Governor of the Bank of England, Eddie George, in 1995 when Barings Bank collapsed.

But Leadsom’s record in the private sector may not be as impressive as she says it is. An investigation by the London Times found she had no experience as an investment banker, despite her backers claiming Leadsom managed billions of dollars worth of funds. The Financial Times disputed her claim to being Barclays’ youngest ever director. She has dismissed the criticism as “ridiculous,” publishing an official version of her curriculum vitae on Wednesday that has left journalists with even more questions about her career. She was also challenged on July 3 to publish her tax returns, after reports emerged that a company with links to her brother-in-law, Peter de Putron, and husband had links to a potential tax-avoidance mechanism.

She is a relative newcomer to politics, having joined parliament as recently as 2010 when she won her seat in South Northamptonshire. But by the following year, Leadsom had co-founded the Euroskeptic pressure group Fresh Start Project. She went on to become the Treasury’s economic secretary in 2014. According to the Financial Times, Leadsom was then transfered to the energy department at Treasury minister George Osborne’s request. Unlike May, she has never held a Cabinet job, but did win respect for her work setting up charities helping parents with problems bonding with their newborn babies.

The mother of three is a devout Christian and abstained from the vote on same-sex marriage in 2013. In an interview on Wednesday, Leadsom said she did not like the gay marriage law. She told ITV: “I believe the love of same-sex couples is as every bit as valuable that of opposite sex couples – absolutely committed to that. But nevertheless, my own view actually, is that marriage in the biblical sense is very clearly from the many many Christians who wrote to me on this subject, in their opinion, can only be between a man and a woman.” In a blog post from 2009, she had expressed shock that a gay couple were “selected ahead of several heterosexual couples” during the adoption of two children.

While Theresa May calls herself a safe pair of hands, Leadsom has pledged to “banish the pessimists” if elected leader of the Conservative Party. Reports that U.K. Independence Party (UKIP) financial backer Arron Banks wants to bankroll her bid has sent a chill through the halls of the establishment.

Some fear her candidacy will lead to the ‘entryism’ of UKIP in the Conservative Party, swinging the final Sept. 9 vote by party members in favor of Leadsom. Based on the state of British politics in the last two weeks, anything is possible. 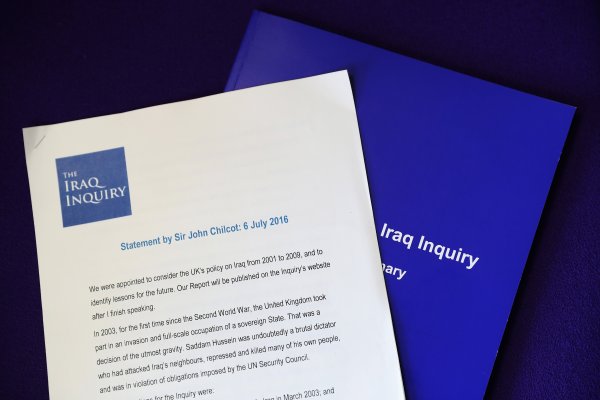 The 4 Biggest Revelations in Britain's Iraq War Report
Next Up: Editor's Pick