On World Chocolate Day, 'Chocolate Rain' Is the Only Song You Need

Maybe it’s just the nostalgia talking, but there’s something so soothingly innocent about the viral videos from the first decade of this millennium, back when the internet was a place of refuge. Go watch “Muffins” or “Numa Numa” and you’ll get the idea.

Of course, none of these videos came close to enjoying the impact of “Chocolate Rain.” If you were online in 2007, it seems almost impossible that you would have missed it — the cherubic young man named Tay Monday, stands in front of a mic and intoning an eccentric samba song in an incongruous baritone, moving away from the mic to breathe in.

Thursday is World Chocolate Day, which seems as good a reason as any to return to the video (Zonday later said the lyrics were coded references to racism, but that’s no matter). The fact remains that “Chocolate Rain” is a mile marker on the irony-strewn highway of popular internet history. Yes, Web virality predated YouTube by a few years — remember Ebaums World? — but “Chocolate Rain” was one of the first videos to really demonstrate the website’s potential as a platform for content to be consumed by the masses. Today, the video has accrued more than 109 million views.

It was not Zonday’s first. In early 2007, he was 24 years old but could have passed for a decade younger, and going by his birth name (Adam Bahner) while pursuing a doctorate in American Studies at the University of Minnesota (incidentally, the department is known for its expertise in studies of pop culture).

In February, he posted to YouTube a video of himself performing an original piano composition called “Canon in Z,” but he later told City Pages, a Minneapolis alt weekly, that he’d been working on what would become his opus for at least ten years before that. He uploaded that video to YouTube (“‘Chocolate Rain’ Original Video by Tay Zonday’) two months later, on April 22.

The rest, as they say, is history. Zonday was invited to perform “Chocolate Rain” on Jimmy Kimmel Live. The Dave Matthews Band covered it.

“I’m not really freaked out,” Zonday told MTV in 2007. “Why would you get freaked out? I don’t dwell on the psychology of people who watch the videos.”

Like the lion’s share of viral sensations, Zonday faded from the spotlight nearly as soon as he entered it. But the internet is forever. YouTube is littered with thousands of parodies of “Chocolate Rain.”

Today, Zonday is 33, still happily and quietly doing his thing online. He does have 307,000 followers on Twitter, where he dispenses little nuggets of unironic wisdom like “make great memories for others to get great memories for yourself” and “reach for any moon that gives you hope.” He’s still making music, and posting videos of himself making that music to YouTube. His still looks younger than he is; his voice is still uncharacteristically, endearingly sonorous. He is not bad. 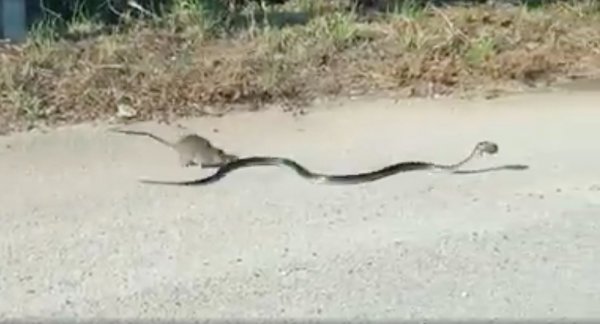 Watch This Brave Mother Rat Save Its Baby From a Snake
Next Up: Editor's Pick