In the spring of 2014, soon after Russia’s military intervention in Ukraine, the U.S. Air Force and the U.S. Army both reached out to David Ochmanek, the former Deputy Assistant Secretary of Defense, with a Cold War flashback of a question: What would happen if Russian troops move on from Ukraine to attack a European country that the U.S. is obligated to defend? To find an answer, Ochmanek and his colleagues at the RAND Corporation, the military think tank where he works, organized a series of war games centering on U.S. allies in Eastern Europe. Their conclusions have troubled the NATO alliance ever since.

“When we run those games with something that looks like our current posture,” Ochmanek told me after presenting the findings in February, “no NATO team has been able to successfully stop or even meaningfully impede this invasion.” In other words, Russian troops could overrun the Baltic countries of Estonia and Latvia, NATO members the U.S. is treaty-bound to protect, before NATO could mount a serious response. The world’s most powerful military alliance would then be faced with a painful dilemma: Either abandon its allies to Russian occupation and, in essence, admit defeat, or face an all-out war with a nuclear superpower.

On July 8, when President Barack Obama arrives in Warsaw for the annual summit of NATO leaders, this dilemma will be one of several on the table—and not necessarily the most difficult one. The fallout from the United Kingdom’s vote to leave the European Union last month will also top the agenda, as will NATO efforts to stop the flow of refugees and migrants into Europe and its plans to take a more active role in fighting ISIS militants in Iraq and Syria.

With all these challenges, the Warsaw summit is shaping up to be the most critical one that NATO has held since the end of the Cold War, says Ivo Daalder, who served as the Obama Administration’s ambassador to NATO between 2009 and 2013. Not only is the alliance facing major threats from Russia to the east and ISIS to the south, but its internal cohesion has suffered an unprecedented blow with the U.K.’s Brexit referendum.

The European project—held together economically by the E.U. and militarily by NATO—“was this large idea stemming out of World War II that, if we cooperated among Europeans, then they probably wouldn’t kill each other,” says Daalder. The British vote to leave the E.U. is the first time a leading stakeholder in this project has decided to break away, putting its own national interests above those of European cohesion and stability. “And once you go down that path, the logic of what I call the renationalization of European politics can take over,” says Daalder, who now heads the Chicago Council on Global Affairs. “We know how that ends, because that’s how we got into two world wars.”

Even without the Brexit to contend with, NATO would still need to consider the risk of a third world war along its border with Russia. From its war games, RAND Corp concluded that NATO would need to deploy seven brigades—each with between 3,000 and 5,000 troops—in order to deter a Russian attack on the Baltics. But in laying out its agenda for Warsaw summit, NATO has said it plans to deploy only a fraction of that force, totaling four battalions – each with no more than 1,000 troops – spread across Poland, Latvia, Lithuania and Estonia.

That kind of deterrent “looks a bit funny,” says Konstantin Sivkov, a Moscow military strategist who served in the Russian General Staff between 1993 and 2005. It’s not just the size of the force that seems laughable to him. It’s the premise that such a force is needed to defend the Baltics from a Russian attack. “When it comes to the Baltics, we don’t have the strength, the resources or the will to do anything there,” he told me by phone from Moscow on Wednesday. “We have nothing to gain in the Baltics.”

The price of defending and subsidizing Crimea, which Russia annexed from Ukraine in 2014, has already put enormous strain on the Russian budget, leading to deeply unpopular cutbacks in the pension system and other social services. The subsequent collapse in the price of oil, Russia’s main export, has driven its economy deeper into a full blown crisis, which shows no sign of easing any time soon.

On top of that, parliamentary elections have been scheduled for the fall, and the last time such a vote took place, in the winter of 2011, mass street protests broke out in Moscow to call for the resignation of President Vladimir Putin. So what worries Russia most is not a foreign war with NATO, but a revolution right at home, especially if the U.S. and its allies attempt to exploit any cracks in the regime, says Sivkov. “If they manage to twist Russia in the direction of social chaos, then NATO can achieve its aim of taking over Russia’s nuclear arsenal.”

This may sound like paranoia. But is it really much more paranoid than NATO’s concerns about a Russian invasion? A lot of Western experts aren’t so sure. After studying the way that Russia has positioned its forces around the country, Michael Kofman, a military analyst in Washington, DC, concluded that if Moscow is getting ready for any kind of war near its territory, it would be another flare-up in Ukraine, not anywhere near the Baltics. “Everything about Russia’s force posture indicates a country ill-prepared for war with NATO,” wrote Kofman, a fellow at the Wilson Center think tank.

However much it may wish to challenge NATO’s military superiority, Russia does not have the money, the manpower or the technology to do that any time soon—at least not in the arena of conventional warfare. But to compensate for that weakness, Moscow has become more reliant than ever on its nuclear arsenal, says William Perry, who served as Secretary of Defense during the Clinton Administration. “They have put heavy emphasis on their tactical nuclear weapons, both in terms of the deployment and in terms of their rhetoric,” he says. “Put those together, and I’d say that’s a very dangerous situation.”

And it’s not one that NATO will resolve by stationing a few thousand more troops along its border with Russia. Going into the Warsaw summit, the White House seems to realize that, and it is trying to open the kind of dialogue with Russia that could avoid an escalation to nuclear threats—or worse. “From NATO’s perspective, the foundation of our relationship with Russia is a balance between strength and dialogue,” says Doug Lute, the current U.S. ambassador to the alliance. The deployment of four more brigades in Eastern Europe will represent the strength in that equation, he told reporters in a conference call on Wednesday. “But we’ll equally be open to dialogue with Russia.”

How and when that dialogue develops will be another challenge for NATO to work out. Stoltenberg, the Secretary General, said on July 4 that the alliance has not been able to agree on the terms for a meeting with Russia, and there is no clear sign that Obama will be able to repair those lines of communication before he leaves office in January.

Listening to the advice of the RAND Corporation might not do much to help. “If they decide to station more forces at our borders, that will complicate the dialogue, without question,” says Sivkov. “Russia will have to answer with measures of its own.” Those measures are most likely to involve positioning nuclear weapons closer to NATO’s borders, and they aren’t likely to make Europe feel any more secure. 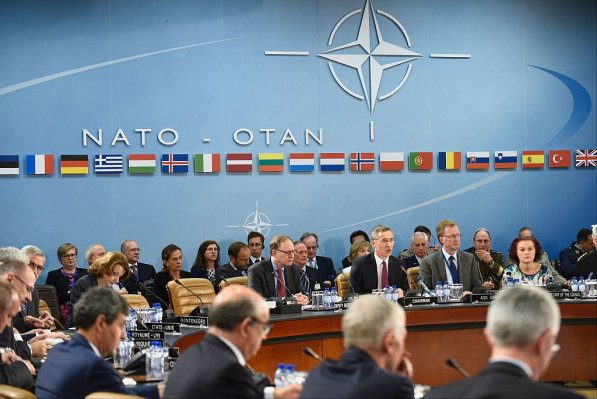