Robots Will Start Delivering You Food This Month

This month Starship Technologies is rolling out its six-wheeled delivery robots in London, Dusseldorf, Bern, and Hamburg, Quartz reports. The robots will be used by two food delivery services in those areas, Just Eat and Pronto, as well as courier service Hermes and grocery store Metro Group. Starship hopes that this new technology will help cut both the time and costs associated with delivery.

The self-driving robots won’t exactly be self-driving at first. They will be instead be driven remotely by Starship employees until the machines become more familiar with their delivery areas, at which point they will gradually become more autonomous. Starship estimates that, after a while, one employee will be able to operate 100 robots at a time.

“We want hundreds of these now and thousands next year,” James Roy Poulter, co-founder of Pronto, told Quartz. It currently costs as much as £12, or $15.53, to have a package delivered in London. Starship wants to cut that cost down to just £1, or $1.29. Unfortunately for Poulter, at this point in time the company will only be deploying robots in the dozens.

The robots have been tested over 5,000 miles, encountering over 400,000 people. So far, there have been no reported accidents. Fortune previously reported that Starship Technologies, started by the co-founders of Skype, also have partners lined up in the U.S., so it’s possible that they could roll out their robots there as well sometime this year. 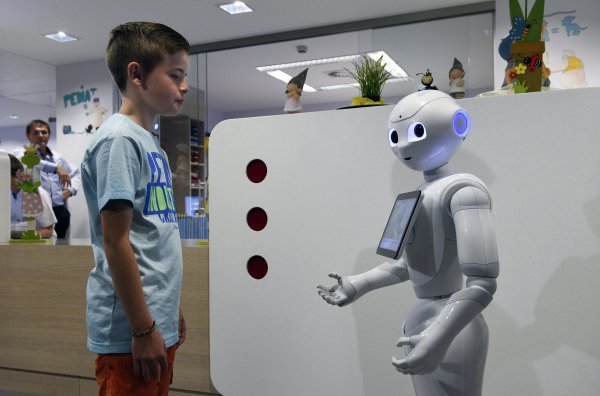 Robots Greet Patients at Belgian Hospitals
Next Up: Editor's Pick