Opperman is the Senior Director to Africa for TRAC: Terrorism Research and Analysis Consortium

It is not easy raising a teenager, and ISIS has added another complication for some parents around the world.

ISIS’s recruitment message promises an idyllic paradise promising inclusion for the excluded, romance for the lonely-hearts, and adventure and heroism for the picked-upon. As a parent, it can be hard to ever be “cool enough” for your teen, and when you are worried that your child is being seduced by ISIS, it can seem almost impossible to compete.

After spending many months working with ISIS-indoctrinated teenagers and their families in South Africa to counter the Svengali pull of ISIS, the most important thing I learned was that openly talking about ISIS’ messages is the best way to counter its sway over a loved one.

In the past 12 months, eight cases have been reported to my office of parents seeking urgent intervention for teenagers, ages 14 to 18, exposed to ISIS propaganda. In all of the cases, the idea of self-actualization leapfrogged the teenager’s interest in propaganda messages, and a more deep-rooted meaning in life lured curiosity.

Though there is no fixed set of lifestyle changes that can tell you if your loved one is being tempted by ISIS—and many of the warning signs look like other sulky behaviors of a hormonal teen—if any two of the signs below are happening, you should take notice.

If you suspect something, what should you do?

Do not try to compete with the ISIS propaganda machine. Its flashy style and never-ending updates are too shiny to compete. Rational arguments for more a mainstream explanation of Islam usually fall on deaf ears. If your teenager has been captured by the glamour, frequency and illustrative nature of ISIS content and views competing sites as boring—many teenagers think in images and not words—sermons are unlikely to redirect behavior.

Do not ban teenagers from social networks, as this plays into the hands of the ISIS members who are already trying to convince your loved one that you are the enemy. Shutting out ISIS propaganda will mean your child may simply revert into backdoor surfing, viewing the adventure of following ISIS propaganda as a secretive mission, further alienating you from your child.

The real key is openness with your child: watch the videos, read ISIS updates, spend time with your teen discussing what is being shown. In short, know and understand how ISIS propaganda works. Listen to your teen’s views and see what areas fascinate them. These areas can become your focus points of discussions.

Parents must realize that protecting your child is not a law enforcement process of interrogation, arrest and prosecution. Rather, defending your child is an educational process where the teenager is guided by open engagement on the truth behind ISIS—the stories by those who have escaped the Caliphate will become your best reference.

Most important, show your teenager that self-actualization relies on opportunities and choices. Herein we find a significant weakness of ISIS propaganda—self-actualization is only attainable in the Caliphate if you follow its rules. The Caliphate only shows you what it wants you to see; once that is realized, the immense amount of contradictions, hypocritical behavior as well as the bait-and-switch of what true Islam is become readily apparent.

Protecting your teenager against ISIS propaganda is not a one-off talk or scolding. To really eradicate the desire to be a member of ISIS out of your loved one requires having a constant openness of discussion, creating support structures in the community and calling on trusted specialists. It requires a shield of calmness and not paranoia to create a safe zone for your child to experience love and acceptance rather than condemnation and victimization. ISIS propaganda is multi-flawed: if you know what you are looking for and are equipped to deal with it, your child will see that, too. 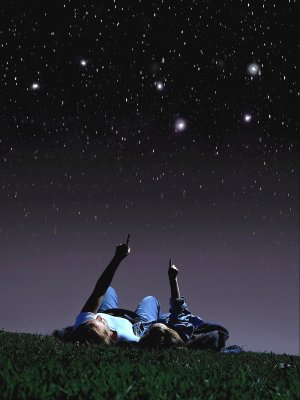 How to Get your Kids into Star Gazing
Next Up: Editor's Pick