Republican presidential candidate Donald Trump speaks during a campaign rally at the American Airlines Center in Dallas on Sept. 14, 2015.
Tom Pennington—Getty Images
Ideas
By Rabbi David Wolpe
Wolpe is the Max Webb Senior Rabbi of Sinai Temple in Los Angeles, the author of eight books and has been named one of the 50 most influential Jews in the world by the Jerusalem Post.

I just returned from Israel, where I was often asked: “So is Donald Trump anti-Semitic?” The question is not prompted by one incident. Trump’s slow, factually inaccurate and fumbled repudiation of David Duke, the locust cloud of Trump’s Twitter followers who have appropriated Nazi images and ideas, and even the hauntingly Nazi-reminiscent salute used by many at Trump rallies all combine to form an unsavory picture. Things came to a boil when Trump recently tweeted a picture of Hillary Clinton and a Jewish star embedded on a pile of cash.

How are we to understand all of this?

The campaign deleted the tweet, and responded to the controversy with answers that were sparse and indirect. New York Observer writer Dana Schwartz wrote a positively eloquent letter to Jared Kushner, the Observer publisher and Trump adviser, outlining the controversy. In response Kushner issued a stock, anodyne answer that did not address any of the issues raised in Schwartz’s letter. The very capable new director of the Anti-Defamation league, Jonathan Greenblatt, has not been slow to call attention to the danger.

With all of this swirling about, my Israeli friends are not the only ones asking: Is Donald Trump anti-Semitic?

I certainly do not believe Trump hates Jews. Not only his daughter’s conversion to Judaism, but also his career in New York real estate, a field where Jews are active and prominent, offers no evidence of a personal animus to Jews. There is nothing in the record of Trump’s statements, private or public, that show a hostility to Israel or Judaism or Jewry.

But you need not be an anti-Semite to give anti-Semitism criminally free reign, and this Trump has done. Decency demands that he first rebuke his followers on Twitter explicitly and with the force he gathers for other castigations, apologize to the people whom they demonize in his name, and not hesitate nor equivocate about clearly offensive images and endorsements. Every informed person in America knows who David Duke is, and the first reaction of an honorable man should be: “I don’t care if he endorses me, I repudiate him and everything he stands for.”

Even if the tweet, as the campaign asserts, was not intended to represent the Jewish star, the automatic reaction of decency is to say: “I am horrified that my campaign issued an image that could be taken that way by so many responsible people. I apologize and will insist that it be corrected and such a mistake never repeated.” The canons of decency are not diminished in a national campaign; they are intensified.

I believe Trump has a genuine attachment to Israel and to Jews. But he appears to have a congenital inability to apologize or to quash the malevolence of any of his supporters, no matter how egregious. One need not be a hater to give license to those who do hate.

This is what I would say to Trump: “Mr. Trump, you are now in a position of enormous influence. I implore you to use it to distance yourself from the ugliness that marches under your banner. To issue divisive statements and then mildly qualify them is unworthy of you, and unworthy of the office you seek. In our nation and abroad there is a great deal riding on your speaking from the better angels of your nature.” 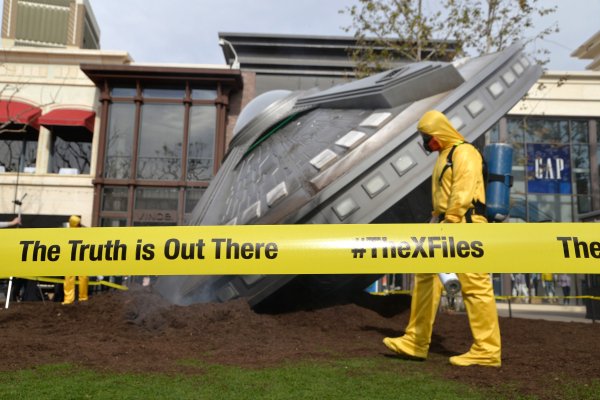 This Is Why People Are Starting to Believe in UFOs Again
Next Up: Editor's Pick