Former Fox News host Gretchen Carlson has filed a sexual harassment and retaliation lawsuit against CEO Roger Ailes, arguing that he fired her from the network for refusing to sleep with him and for voicing her objections to what she felt was a discriminatory workplace.

Carlson’s employment was terminated on June 23, a day after her last contract expired, according to a statement from her lawyers. She says that in a meeting last September, Ailes said, “I think you and I should have had a sexual relationship a long time ago and then you’d be good and better and I’d be good and better.” She also claims he would ogle her in the office and ask her to “turn around so he could view her posterior,” the complaint filed in New Jersey Superior Court alleges.

Calrson also accused Ailes of “wondering aloud how anyone could be married” to her, but also calling her “sexy” and saying she’s the person he’d most want to be stuck with on a desert island.

In addition to other comments about her body, she alleges he responded to her complaints about sexism in the workplace with hostility, saying she thinks “it only rains on women.” The complaint says her Fox & Friends co-host Steve Doocy treated her “in a sexist and condescending way,” including in one incident by “putting his hand on her and pulling down her arm to shush her during a live broadcast.” When she complained about this behavior to Ailes, she says he called her a “man hater” and “killer” and told her to learn to “get along with the boys,” according to the complaint.

After Carlson moved from Fox & Friends to The Real Story with Gretchen Carlson in 2013, Real Story produced solid ratings which were up in June, her lawyers said.

“Although hosting her own show may have been publicly perceived as a promotion,” her lawyers wrote in a statement, “the complaint alleges it was actually a means by which Mr. Ailes sought to lower Ms. Carlson’s profile and remove her from the network’s mainstream where she had garnered significant popularity and wished to remain.

“I have strived to empower women and girls throughout my entire career,” Carlson said in a statement. “Although this was a difficult step to take, I had to stand up for myself and speak out for all women and the next generation of women in the workplace. I am extremely proud of my accomplishments at Fox News and for keeping our loyal viewers engaged and informed on events and news topics of the day.”

In a statement from Ailes, the CEO called Carlson’s allegations “offensive” and “wholly without merit,” and promised to defend against the suit “vigorously.”

“This is a retaliatory suit for the network’s decision not to renew her contract, which was due to the fact that her disappointingly low ratings were dragging down the afternoon lineup,” the statement says. “Ironically, FOX News provided her with more on-air opportunities over her 11 year tenure than any other employer in the industry, for which she thanked me in her recent book.”

In a statement to Reuters, Twenty-First Century Fox said it has begun an internal review of the allegations, but has “full confidence in Mr. Ailes and Mr. Doocy, who have served the company brilliantly for over two decade.” 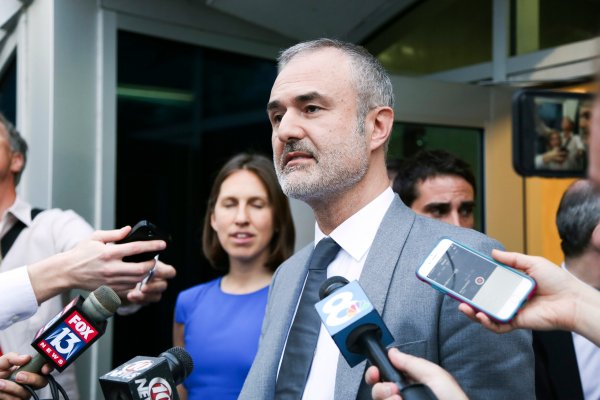 Gawker Founder Nick Denton on the Future of Media
Next Up: Editor's Pick