The Big Bang Theory actress Kaley Cuoco has apologized for sharing a photo of her dogs sitting on an American flag for the Fourth of July.

In the now deleted post from Monday, Cuoco thanked The Pet Handler for dogsitting her three dogs while she was out of town. In the picture, two of the dogs were sitting on the flag in the shade, and one dog stood next to the flag wearing a flag neckerchief, you know, the kind of dog that makes everyone proud to be an American.

Some commenters were outraged to see the two dogs on the flag and that the flag was on the ground, violating the U.S. government’s guide to displaying the American flag, which states, “the flag should never touch anything beneath it such as the ground, the floor, water, or merchandise.” Other commenters defended the actress, saying that it was not intentionally disrespectful.

Cuoco wrote an apology, which she posted on Instagram on Tuesday:

“First off, please know, I have the utmost respect for my country.” She continued, “I am a proud American in every sense of the word. I understand the American flag stands for our freedom and represents American heroes, past and present. Yesterday I made a mistake by posting the picture that was taken of my sweet dogs posing on an American flag. I sincerely apologize to anyone that has been offended by my previous post. This is no way reflects my feelings toward what the American flag represents.” 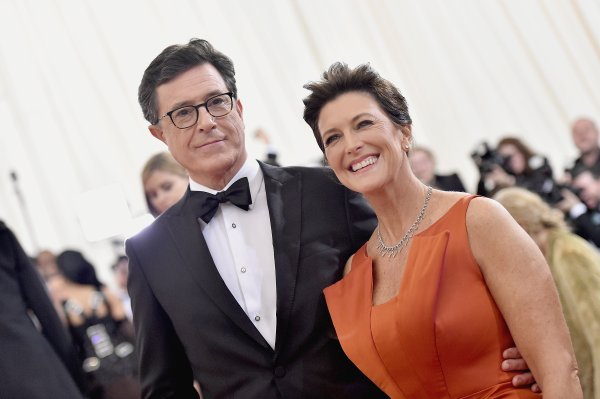 Stephen Colbert Wins for Best Meet-Cute with His Wife
Next Up: Editor's Pick