Cape Town Uber driver Eric Selaelo was taken aback by the news. Like many South Africans, he was expecting double amputee and Olympic sprinter Oscar Pistorius to get at least 10 years for the murder of his girlfriend Reeva Steenkamp in a case that has riveted the country’s attention for most of the past three years. Instead, Pistorius got six. “Huh?” Selaelo spluttered. “Minimum for murder is supposed to be 15. Maybe he didn’t mean to kill her, but he took a life. He needs time in jail as a lesson for everyone else.”

Like Selaelo, many South Africans were incredulous. Twitter erupted in outrage over the light sentence, calling it a “disgrace,” an “embarrassment” and “disgusting,” while noting that lesser crimes, such as drug trafficking, fraud and theft, often get longer terms. Selaelo chalked it up to a good defense team: “Money helps,” he shrugged. On Twitter, a few suggested that a white, global celebrity like Pistorius would always do better in court in South Africa than a black defendant.

Johannesburg-based columnist Pearl Boshomane said the light sentence was a reflection of women’s low standing in the country. “Women’s lives are worth absolutely nothing. Our rapists don’t go to jail. Our murderers barely get punished,” she tweeted.

In anticipating the backlash as she handed down the sentence, Judge Thokozile Masipa noted that “Our courts are courts of law, and not of public opinion,” before she went on to describe the mitigating circumstances, including the facts that Pistorius had already spent a year in prison, and that he was a strong candidate for rehabilitation.

Twenty-nine-year-old Pistorius, who was born without fibula bones, had both of his legs amputated at the knee at 11 months. Nonetheless he went on to be a global icon, competing against able bodied athletes in the 2012 Olympics while wearing high-tech prosthetic limbs, earning the nickname “blade runner” for their scythe-like shape. That celebrity turned to notoriety on Feb. 14, 2013, the day Pistorius killed Steenkamp in his home.

Claiming he mistook her for an intruder he thought was hiding in the bathroom, Pistorius says he leapt out of bed and shot four bullets through the door before even putting on his prosthetic limbs. He was originally charged with manslaughter and given five years, but in December the Supreme Court of Appeal overturned his conviction and converted it to murder.

Read More: Why Oscar Pistorius’ Release to House Arrest Does Not Guarantee His Freedom

Acknowledging that it was “difficult to find the appropriate sentence,” and that “nothing will diminish the pain caused to Reeva Steenkamp’s family,” Judge Masipa declined prosecutors’ request for a minimum of 15 years. Recalling a striking moment in the trial, in which Pistorius walked across the courtroom on his stumps to demonstrate how powerless he was without his prosthetic limbs, Masipa pointed out that on the night of the murder Pistorius was not the powerful Olympian of global fame, but a terrified and vulnerable man stumbling in the dark.

Pistorius was emotionless as the sentence was passed down, and his lawyers say they will not appeal. For some at least, the sentencing brought a welcome end to a drama that has dragged on for far too long. “Thank goodness Pistorius sentenced, no more mind numbing wall to wall coverage by BBC/ #VictoriaLive/Sky News,” tweeted @liarpoliticians.

At least for the next two weeks. Judge Masipa granted the Steenkamp’s legal team 14 days to appeal. 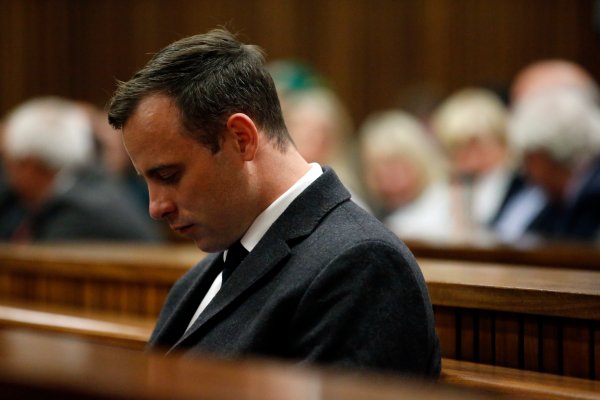 Oscar Pistorius Gets 6 Years for Murder
Next Up: Editor's Pick