When Kadhim al-Jabbouri struck the statue of Saddam Hussein in downtown Baghdad with his sledgehammer in April 2003, he became the face of what was then a huge moment of triumph and hope for Iraq. The country’s oppressive dictator had been ousted, and as the sculpture of him tumbled to the ground and American troops rolled in, the mood was exultant.

More than 13 years later, however, the man of that moment said in an interview with the BBC that he regrets toppling the statue because of everything that followed.

“Now, when I go past that statue, I feel pain and shame,” al-Jabbouri told the BBC. “I ask myself, Why did I topple that statue?”

Following the nearly decadelong Iraq War, the country has now become a hotbed for Islamic extremism and a stronghold — albeit a gradually diminishing one — for the Islamic State of Iraq and Syria (ISIS) militant group. The group’s latest attack, at a mall in Baghdad over the weekend, killed at least 250 people and is the worst on Iraqi soil since the U.S. invasion.

Al-Jabbouri used to repair Saddam’s motorcycles, but was later jailed for more than a year after falling out of favor with the regime and reportedly saw over a dozen family members executed by the government. He was elated when U.S. forces came, but now echoes the laments of many Iraqis from the years of instability and violence that have followed.

“Every year, things started to get worse. There was corruption, infighting, killing, looting,” he said. “Saddam has gone, but in his place we now have 1,000 Saddams.”

The former wrestler and weightlifter now lives with his family in Lebanon’s capital Beirut, among more than a million refugees fleeing war, according to the Washington Post. He has harsh words for the U.S. President and U.K. Prime Minister of the time, George W. Bush and Tony Blair, considered the architects of the 2003 war.

“Bush and Blair are definitely liars,” he said, adding that he thinks they completely destroyed Iraq. “If I was a criminal, I would kill them with my bare hands.”

As for the ill-fated statue, it represents to al-Jabbouri a simpler and far more peaceful time that he now yearns for. 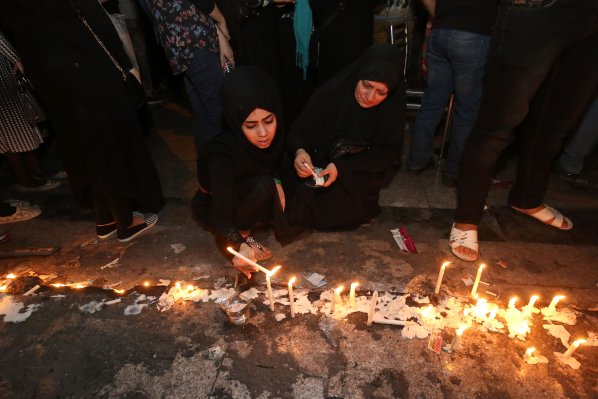