The FBI investigation into Hillary Clinton’s email uncovered evidence that her spokesman gave reporters false information in 2015 about the process lawyers used to sort personal emails prior to deletion.

Clinton press secretary Nick Merrill previously told TIME that her attorneys had individually read every email to determine if it was a government document or personal correspondence. “Every one of the more than 60,000 emails were read. Period,” Merrill wrote in one email to a TIME reporter dated March 14, 2015.

The FBI concluded that this claim was false. “The lawyers doing the sorting for Secretary Clinton in 2014 did not individually read the content of all of her e-mails,” said FBI Director James Comey in a statement on Tuesday. “Instead, they relied on header information and used search terms to try to find all work-related e-mails among the reportedly more than 60,000 total e-mails remaining on Secretary Clinton’s personal system in 2014.”

The process for sorting the emails was questioned because keyword searches are widely seen as an imprecise tool for deciding if an email qualifies as a federal record under the law.

After the announcement, Merrill told TIME the campaign was still digesting the FBI findings. “No one misled you,” Merrill wrote in an email on July 5. “We heard Comey’s statement for the first time when you did today, so we’re trying to figure it all out too.”

Merrill’s previous claim that all the emails were read came in response to a TIME magazine cover story, The Clinton Way, by David von Drehle. That story reported, based on a fact-sheet distributed by Clinton’s lawyers, that the process for sorting the emails used several methods, like keyword searches, but did not include reading each individual email.

After publication, Merrill objected to the story. “I apologize if the fact sheet wasn’t clear enough, but to be crystal clear now, on the record, as Secretary Clinton’s Press Secretary and the person whose job it is to be the authorized representative to the media, I’m telling you that your piece was factually inaccurate, that the fact sheet was providing examples of the process used by the reviewers to double and triple check they were capturing everything,” Merrill wrote in an email. “This was not in lieu of reading them all, it was in addition to reading them all. We did not mean to imply otherwise.”

After receiving this complaint, TIME requested an interview with Clinton’s lawyers, which was denied. In addition to Merrill’s on-the-record statement, a senior Clinton adviser, who was granted anonymity to describe the email-sorting process in greater depth, repeatedly told TIME in an interview that her lawyers had read all of the documents prior to deleting them.

TIME published a second story explaining Merrill’s objections, which included an on-the-record quote from him stating that all emails were read and apologizing for the confusion caused by the fact sheet.

By not requiring staff or lawyers to read the emails, Clinton may have deleted work-related emails that should be archived under the Federal Records Act. Comey said July 5 that the FBI uncovered several thousand work-related emails that were not handed over to the State Department by Clinton’s legal team, and he speculated that some of those emails may have been deleted after being marked “personal” by Clinton’s lawyers. “We found no evidence that any of the additional work-related e-mails were intentionally deleted in an effort to conceal them,” Comey said.

At the time of the disclosure of the private email server, public records experts described the process employed by Clinton’s legal team as imperfect. “I would question why lawyers for Secretary Clinton would use keyword searching, a method known to be fraught with limitations, to determine which of the emails with a non-.gov address pertained to government business,” said Jason R. Baron, a former lawyer at the National Archives and Records Administration who is now an attorney in the Washington office of Drinker Biddle & Reath. “Any and all State Department activities—not just communications involving the keywords Benghazi or Libya—would potentially make an email a federal record. Given the high stakes involved, I would have imagined staff could have simply conducted a manual review of every document. Using keywords as a shortcut unfortunately leaves the process open to being second-guessed.” 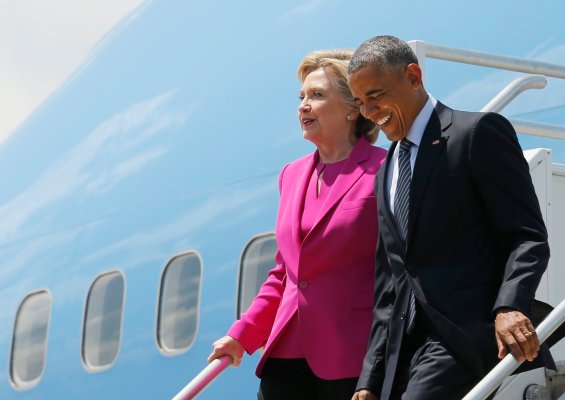 Watch Live: President Obama and Hillary Clinton Campaign Together in North Carolina
Next Up: Editor's Pick