The bad news came in waves: three shattering terror attacks in less than a week, more than 300 people dead, nearly as many as ISIS had killed in all its previous operations in the previous six months.

But behind the horror is a different story. ISIS is transforming itself into a terror organization because it is failing at what it really wants to be: something new and galvanizing, a true state. By every measure except headlines, the group is losing ground—not only physical territory, which is shrinking in Iraq, Syria and even Libya, where ISIS is being pushed out of the coastal city of Sirte—but also in public support.

Read More: ISIS Attacks Spike Even As It Loses Ground at Home

In Mosul, the Iraqi metropolis the group has held for two years, Reuters reports that schoolchildren are taught to complete the sentence, “The Islamic State is [blank] and [blank]” by chanting back, “staying and expanding.” But it’s not. The number of new recruits arriving in Syria and Iraq dropped by 90 percent from April 2015 to April 2016, according to U.S. officials. Likewise, support for ISIS among young Sunni Arab Muslims across the Middle East continues to shrink. A year ago, 60 percent ruled out support for ISIS even if it renounced its brutal tactics, according to a 16-nation survey. This year, it was up to 80 percent. That’s a very bad trend line for a group that aims to unify the umma, or worldwide Muslim community, under the flag of a new Caliph, the title the Prophet Mohammed held during his lifetime 1,400 years ago.

But ISIS is still doing what it’s always done very well: control the news, and with it, at least appear to control events. It almost doesn’t matter that the recent torrent of terror strikes was publicly forecast by the director of the CIA in congressional testimony two weeks earlier. “The resources needed for terrorism are very modest, and the group would have to suffer even heavier losses of territory, manpower and money for its terrorist capacity to decline significantly,” John Brennan told lawmakers June 16, referring to the group as ISIL. “In fact, as the pressure mounts on ISIL, we judge that it will intensify its global terror campaign to maintain its dominance of the global terrorism agenda.”

Dominating the terrorism agenda comes easy to ISIS partly because it operates so differently from al-Qaeda, the group that pioneered global terror in the name of Islamist fundamentalism. Osama bin Laden built al-Qaeda as an elite, top-down, members-only organization. It’s diabolical, but also rigidly hierarchical. A plot had to be approved by headquarters, and could be years in the hatching.

ISIS operates on a different model. It’s a top-down organization in military matters, but more of a “movement” when it comes to terror, repeatedly broadcasting appeals to anyone, anywhere, to strike out any old way in its name—an invitation to freelancing that bin Laden would not countenance. “Because it’s not as obsessed with brand management, it has all of these different kind of networks that it can energize on its behalf,” says Will McCants, a scholar at the Brookings Institution and author of The ISIS Apocalypse: The History, Strategy, and Doomsday Vision of the Islamic State. “It has the tightly controlled networks, it has looser ones, and it has inspired followers. And it can turn them all loose.”

That’s precisely what ISIS did at the start of Ramadan, the annual monthlong rite of fasting and repentance that Islamist militants also regard as a month for ‘conquest.” The group’s call for attacks may have helped inspire Omar Mateen to kill 49 people in a gay nightclub in Orlando on June 12. It was the worst mass shooting in U.S. history, yet confusion over Mateen’s motivations—was he acting out of extreme homophobia or as an agent of ISIS?—made the attack a bit of a misfire for the terror group. Afterward, al-Qaeda in the Arabia Peninsula’s magazine urged future bombers to avoid targeting gays and other minorities, because the resulting outrage over a hate crime serves to distract from outrage over terror.

Which only goes to show that terror is a tool. At the Istanbul airport, the target was the economy of Turkey, which after years of ambivalence about the Islamic State—and years of allowing jihadis to cross the border from Turkey into Syria to join ISIS—has finally taken up against the group. In Baghdad, the target was the neighborhood of Karrada, home to Christians and Shia whom ISIS regards as apostates (and hopes to engage in a sectarian war, by the lights of its rigidly exclusionary vision of Islam). And in Bangladesh, the attackers singled out foreigners from the hostages in the Holey Artisan Bakery in the embassy neighborhood where 20 eventually were killed.

Together with the terror attacks of the previous months—including, with the Nov. 17 bombing of a charter Russian flight, at least one jetliner downing—the strikes signal the emergence of ISIS as a more formidable terror group than al-Qaeda. But there’s a reason terror is called “the weapon of the weak,” and for ISIS, it remains just one front in a larger war that also takes in military battlefields and propaganda—a war it has begun to lose. The three battle spaces have overlapped since Aug. 19, 2014, the day U.S. journalist James Foley was beheaded on a videotape by a masked man who warned President Obama not to bomb the group. That ghastly killing, which was the first introduction to the group for many Americans, was also its first demonstration of using terror as a weapon. “They used what they had at hand to punish—literally at hand,” McCants tells TIME. “The capacity they had was the prisoners under their control.”

At around this time, however, ISIS leaders made a decision to expand their reach, “to build an actual capacity to touch their enemies, and they began to invest money and personnel to build a terror network,” McCants notes. The group began training leaders of the cells that eventually carried out attacks in Paris and Brussels. Neither showed anywhere near the sophistication of an al-Qaeda “spectacular” like 9/11, but in the terror realm, ISIS seems to prefer quantity over quality.

“No one should take comfort in the fact that they’re losing, because we will see more of these kind of attacks,” says McCants. “They distract from their losses. The more success the Coalition has against them, the most incentive they have to strike in other ways.” Or as the scholar put it in a Tweet dashed off between the rush of headlines: “ISIS has sent out its Bat signal and assholes ’round the world are responding.” 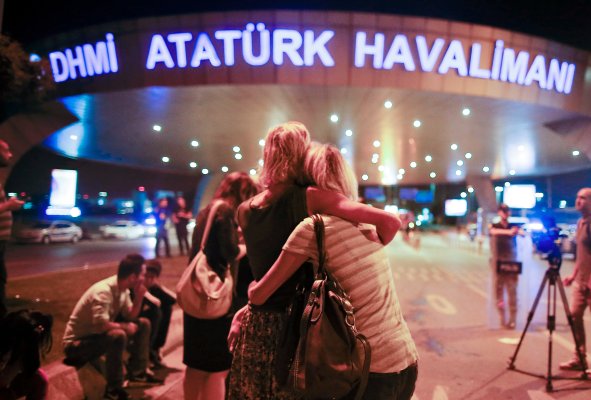 How the Russian ISIS Fighters Became a Threat in Turkey
Next Up: Editor's Pick