Bangladesh Faces an Uncertain New Reality After the Dhaka Attack

People attend a candlelight vigil for the victims of the attack on the Holey Artisan Bakery restaurant in Dhaka, Bangladesh, on July 3, 2016
Annan Abidi—Reuters
By Nikhil Kumar

For years, Bangladesh has presented a paradox to outsiders. The small, densely packed South Asian nation is among the world’s poorest. It is often ranked as one of the world’s most corrupt places. Its political system has repeatedly been jolted by instability. And its territory is deeply vulnerable to the effects of climate change.

And yet, throughout all this, Bangladesh has also been a source of positive news. As an April assessment by World Bank economists put it, “by any standards, [the] Bangladesh economy has done well,” with economic growth exceeding 6%. In fact, as an International Monetary Fund report from earlier this year noted, the economy has been “strong and largely” stable since the mid-1990s. A key driver has been the country’s $26 billion garment industry, which accounts for around 80% of its exports. As the economy grew, the number of Bangladeshis in living in poverty fell and social indicators improved, with the government putting money into initiatives to empower women and improve food security.

Growth has continued to be firm in recent years, even as a dangerous new challenge to the Muslim-majority nation became increasingly apparent — the threat from extremist violence. Beginning around 2013, a bloody campaign of targeted killings steadily picked off writers and activists critical of Islam, along with members of the country’s religious minorities. In many cases, al-Qaeda and the Islamic State of Iraq and Greater Syria (ISIS) sought to take credit for the attacks. But the government of Sheikh Hasina time and again played down the threat from transnational terrorist groups. Instead, it blamed homegrown radicals and extremists linked to the political opposition, which historically has had close links with right-wing Islamists. Security analysts have been concerned about the situation in Bangladesh for months now, but the targeted nature of the killings and the government’s stand that it was dealing with an internal problem have largely kept the issue out of the global spotlight.

The tragic attack on the Holey Artisan Bakery restaurant on July 1 changed that, marking a gruesome escalation in the extremist threat. Located in the upscale Dhaka district of Gulshan, home to wealthy Bangladeshis, expats and foreign embassies, it was carefully chosen for its international clientele. Twenty hostages were brutally murdered, most of them foreigners. Nine Italians, seven Japanese, an Indian national and a U.S. citizen of Bangladeshi origin, along with two Bangladeshis. Accounts from survivors confirm that the attackers sought out the foreigners, sparing most of the Bangladeshi’s trapped inside the restaurant.

Two policemen also died as the authorities tried to take control of the situation. Six of the gunmen were killed after a tense overnight siege that turned the international spotlight on the country’s battle with terrorism. One is now in the custody of the authorities.

The government confirms that all of the attackers were Bangladeshi nationals, with police saying they had previously tried to arrest five of them. But authorities continue to dispute any link to ISIS, which claimed that it was behind the attack “They are Bangladeshi, they are home-grown and they are politically motivated,” Gowher Rizvi, an adviser to Hasina, tells TIME. “[The] debate over [ISIS] is not the central issue. Terrorists are terrorists. They come in all sizes and shapes. We want to learn from the incident and the government will try to address the challenges.”

This time, however, in addition to taking credit for the attack, ISIS also put out pictures of the alleged gunmen standing in front of its black flag, raising troubling questions for the government. As a weekend editorial in the local Daily Star newspaper said: “Friday’s mayhem brings some new and striking realities to the fore. Our usual response ‘these are isolated incidents’ have proven to be false.”

The government also faces tough questions about its efforts to tackle extremism. Many of the early attacks, including the killing of the Bangladeshi-American writer and blogger Avijit Roy in Februrary 2015, were aimed at critics of religion, and the government was widely seen as mincing its words in defending the victims. Instead of imposing order, it seemed too preoccupied with criticizing the slain. For example, shortly after Niladry Chattopadhya, another secular blogger, had been hacked to death at his Dhaka home, Hasina told TIME that secular-minded writers and activists needed to be careful in what they say and write. “If anybody thinks they have no religion, O.K., it’s their personal view … But they have no right to write or speak against any religion,” she insisted in a September interview at her Dhaka office. The Prime Minister, who presents herself as the protector of the country’s secular foundations, added that writers like Roy and Chattopadhya “should not hurt anybody’s [religious] feeling. When you are living in a society, you have to honor the social values, you have to honor the others’ feelings.”

This was before the first attack on a foreigner, Italian citizen Cesare Tavella, who was gunned down as he went for a jog in the Gulshan neighborhood. More recently, after the murder of the wife of an antiterrorism police officer, Hasina launched a nationwide crackdown, with authorities arresting thousands of people in what it said was an effort to fight extremism. The opposition, however, said the move was designed to round up its supporters and workers.

The latest Gulshan attack, in addition to focusing the world’s attention on the question of just how prone Bangladesh is to international terrorism, could also hit the one area where progress has been steady in recent years — the country’s economy. Although individual foreigners have been targeted before, the Holey Artisan carnage is the biggest such attack to hit Bangladesh in recent times, sending shock waves through its expat community, many of whom are involved in the garment trade or work in the aid sector.

Many of the victims, too, were connected to the garment business, including 52-year-old Italian national Nadia Benedetti, identified as the managing director for Bangladeshi branch of a British firm. “She was a frequent traveler to Bangladesh for business. She was both a buyer and investor here,” Kazi Iftaquer Hossain, who knew Benedetti and is the head of a garment-industry trade association, tells TIME. The attack, he says, could push international buyers of Bangladeshi garments to revisit their business ties with the country, as concern grows about the safety of their employees. “I am extremely disappointed and worried. My major clients are from the U.K. and European countries,” Hossain says. The aid sector could also suffer. Following confirmation that seven Japanese nationals were among the dead at the Holey Artisan Bakery, the Wall Street Journal reported that a Japanese governmental aid agency was now considering withdrawing from the country.

In its editorial, the Daily Star said the “targeted killings and now this massacre may not be organically linked but that they form a part of [something] bigger and more sinister should not be doubted any more.” It added: “The message from last Friday’s brutal killing is clear; our efforts so far have been inadequate. We need to sharpen our efforts in every sense of the term.” Unless Hasina and her government heed these calls, many more lives could be put at risk.

— With reporting by A.K.M. Moinuddin / Dhaka 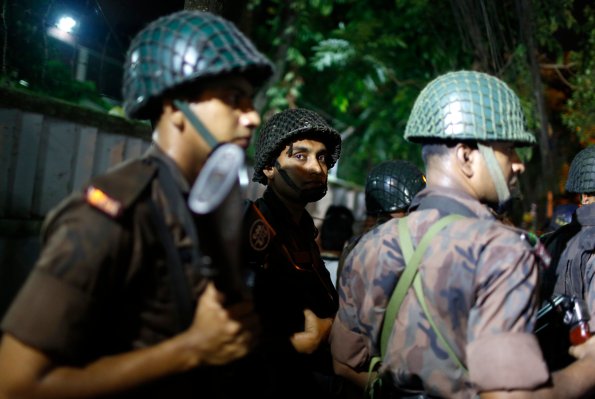 20 Hostages Die in Bangladesh Attack Claimed by ISIS
Next Up: Editor's Pick