In the final days before a landmark court decision over disputed territory in the South China Sea, Beijing has announced it will conduct military drills in the busy trade corridor, raising tensions ahead of a ruling that Chinese officials have already vowed to ignore.

On Sunday, China’s Maritime Safety Administration published plans for naval exercises, to be held from July 5 to 11 in an area reaching from China’s Hainan Island down to the nearby Paracel Islands, which are claimed by China, Vietnam and Taiwan. A ruling on a complaint issued in 2013 by the Philippines, which, along with China, claims both the Spratly Islands and Scarborough Shoal in the South China Sea, is expected July 12 at the International Court of Arbitration at the Hague.

“The drills are a very symbolic expression of China’s resolve,” Zhu Feng, dean of the Institute of International Affairs at Nanjing University, tells TIME. “It is definitely also responding to the recent American warships patrolling in the South China Sea.”

Washington is a defense-treaty ally of Manila and has recently accelerated troop rotations on Philippine military bases. The U.S. Navy has also ramped up “freedom of navigation” exercises in the South China Sea, of which almost 90% is claimed by Beijing in an area demarcated by the so-called nine-dash line. Protracted disputes with various Southeast Asian nations have escalated since China’s construction of military bases and landing strips on reclaimed islands in the waterway, through which $5 trillion in trade passes annually.

The drills are also likely intended to assuage domestic chauvinism. “It is very important for the Xi Jinping leadership to keep an eye on nationalist emotions in the lead to the court’s decision,” says Linda Jakobson, director of Australia’s China Matters think tank and visiting professor at the University of Sydney.

The Hague is expected to rule in Manila’s favor, yet China has repeatedly said any decision would be illegitimate and has refused to participate in proceedings. Chinese officials instead advocate bilateral talks. “China will not accept an invalid arbitral award,” China’s ambassador to the Netherlands, Wu Ken, told China’s state Xinhua news agency in May. “Such an arbitration should not be recognized or supported in any manner.”

Sunday’s announcement of drills effectively underscores that existing stance. However, according to Zhu, it is significant that the military exercises are to take place at the Paracel Islands, which though disputed are entirely under Chinese control, rather than the Spratlys, where the Philippine military retains a presence. “It shows [China] doesn’t want to cause a lot of concern or make a bigger bang,” he says.

China doesn’t really need to. Even though the court at the Hague is expected to rule against Beijing, its scope is limited. The court is not allowed to arbitrate in a specific territorial dispute — such as who legitimately controls the Spratly Islands — but is instead to rule on the legality of China’s nine-dash line.

The Philippine position is that even if the Spratlys were China’s rightful dominion, Beijing should only be allowed control of waters in a 12-mile radius. China, in turn, argues that it should get a 200-sq.-mi. exclusive economic zone. However, Manila says that in either case the total territory would be far less than what Beijing currently claims under the scope of the nine-dash line.

Crucially, the court has zero powers to enforce what is probably the highest-profile decision in its 117-year history. Beijing is also busy working to secure the support of other — generally developing — nations to buttress its position.

“The court does not have a military at its disposal so this would be a moral and political victory if the ruling is favorable to the Philippines,” says Jakobson. “There is a lot of room for China to maneuver politically.” 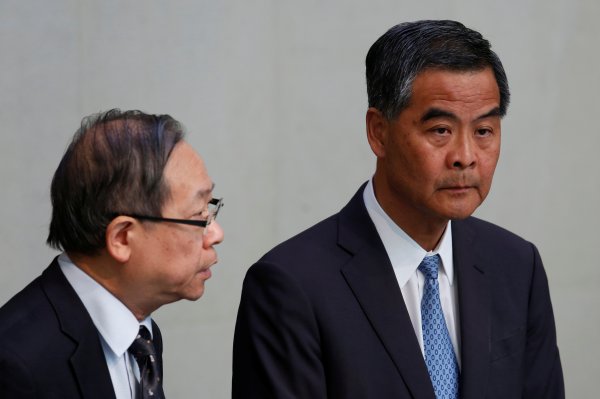 Hong Kong Delegation to Visit China Over Detained Booksellers
Next Up: Editor's Pick