The Trump Plaza Hotel and Casino in Atlantic City, May 8, 2004.
Craig Allen—Getty Images
By Sam Frizell

Donald Trump has pointed to his casino and hotel empire as the center of his business success. Next week, Hillary Clinton will try to take that claim away from him.

The former secretary of state is planning to visit Atlantic City on Wednesday, where she will lambast Trump’s business record. She will say that Trump is an incapable and selfish businessman, a campaign official said, and point to his multiple bankruptcies in the city.

Trump’s Atlantic City businesses suffered several bankruptcies due to high debt on the projects, and he often did not make enough money to pay his debtors, even as his competitors in the city grew. He was accused of not paying contractors, many of which were small businesses.

Trump’s business empire, including furniture and clothing lines, hotels and golf courses, was a key factor in his popularity during the Republican primary, as he regularly showed off flashy displays of wealth. Polls have found that Americans trust him to handle the economy better than Clinton. In a recent CNN/ORC poll, 51% said Trump and only 43% said Clinton was better equipped to handle the economy. Clinton’s trip to Atlantic City is an attempt to put a hole in that theory.

Trump says that he profited from his bankruptcies and that he successfully managed his debt. “I am ‘the king of debt,'” Trump tweeted last month. “That has been great for me as a businessman, but is bad for the country. I made a fortune off of debt, will fix U.S.”

Clinton has spent much of the recent weeks attacking Trump’s business practices, accusing him of outsourcing jobs and hurting his suppliers. She is taking a page from Republican political operative Karl Rove’s playbook: hit your opponent where he is strongest.

“The trip will highlight that Clinton is committed to building an economy that works for everyone, not just those at the top, while Donald Trump has spent his life fighting for himself at the expense of everyone else,” said a Clinton official who previewed the plan.

Clinton has also attacked him for his Trump University business, which has been subject to several class-action lawsuits by customers who said they were scammed. 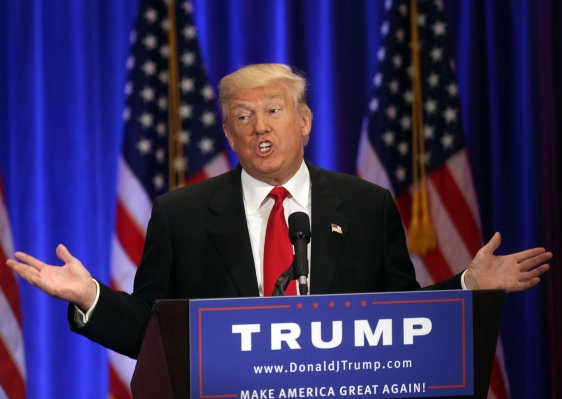 Donald Trump to Turkish Reporter: 'Are You Friend Or Foe?'
Next Up: Editor's Pick