Twenty hostages, all of them foreigners, were killed at a popular Dhaka restaurant after heavily armed terrorists raided the venue in the Bangladeshi capital’s diplomatic area late on Friday evening, triggering a tense overnight siege lasting nearly 12 hours.

Two policemen were also killed as security forces attempted to take control of the building following the attack claimed by ISIS. Officials said 13 hostages, including three foreigners, were eventually rescued alive from the Holey Artisan Bakery restaurant early on Saturday morning, after police and army commandos stormed the venue in Dhaka’s upscale Gulshan neighborhood, killing six of the attackers.

The country’s Prime Minister, Sheikh Hasina, said one terrorist had been captured alive. “Because of the effort of the joint force, the terrorists could not flee,” she said in a nationally televised address.

Among those rescued from the restaurant were a Japanese citizen and two Sri Lankan nationals. However, seven other Japanese nationals who were thought to be dining there on Friday remain unaccounted for, according to a Japanese government government official who spoke to the AP. The identities of the victims began to trickle out on Saturday.

In a statement, Emory University said Abinta Kabir, an undergraduate student at its Oxford College campus in Georgia, was among the dead. “Abinta, who is from Miami, Florida, was in Dhaka visiting family and friends.” Emory President James Wagner said he spoke to Kabir’s mother, “who is in unspeakable pain.”

Another victim, Faraaz Hossai, was a graduate of Oxford College and a current student at Emory’s Goizueta Business School, the school said. Hossai was from Dhaka. A third U.S. college student, 19-year-old Indian national Tarushi Jain, was also killed in the attack, according to the Indian government.

Italian authorities said nine of their nationals were identified among the victims. “There is another person who is missing and could be hiding himself or could be among wounded people,” Foreign Minister Paolo Gentiloni told reporters, according to Reuters. “We are looking for him.”

People help an unidentified injured person after a group of gunmen attacked a restaurant popular with foreigners in a diplomatic zone of the Bangladeshi capital of Dhaka on July 1, 2016.
AP

Speaking to TIME, Sumon Reza, who identifies himself as a supervisor at the restaurant, says he was inside the building on Friday evening when the gunmen entered the venue. He escaped with another employee by climbing up and jumping from the rooftop of the building. “The entire building was jolted when the gunmen [mounted their attack],” he says.

Located in the north of the city, Gulshan neighborhood where the restaurant is located is home to numerous foreign missions and diplomats and was the site, in September last year, of the killing of Italian citizen Cesare Tavella, an aid worker who was gunned down by motorcycle-riding assailants as he was jogging.

Read More: What to Know About Growing Extremist Violence in Bangladesh

Tavella’s murder followed a string of killings of secular-minded Bangladeshi bloggers and activists starting in 2013 that were blamed on Islamist militants. In the aid worker’s case, the killing was claimed by ISIS, an alarming sign for analysts concerned about rising extremism in the country, but one that the government sought to play down, saying the group was not active on Bangladeshi soil. Only days ago, seven people, among them a senior opposition official, were charged for Tavella’s murder.

Bangladeshi authorities have also pushed back against claims attributed to affiliates of al-Qaeda that it was behind other attacks inside the small South Asian nation. Instead, the government and local police say homegrown militants are responsible for the campaign of murders that has seen gunmen and machete-wielding assailants attack secular activists, foreigners and members of Bangladesh’s religious minorities. In April, a group of men posing as couriers murdered the country’s most prominent LGBT-rights activist, 35-year-old Xulhaz Mannan, along with his friend, 25-year-old actor Mahbub Rabbi Tonoy.

Facing growing pressure to respond to the violence, the government launched a nationwide crackdown in June, arresting more than 11,000 people after suspected militants murdered the wife of an antiterrorism police officer in the coastal Bangladeshi city of Chittagong. The country’s main opposition party, however, criticized the crackdown, saying the move was designed to round up its leaders and party workers. 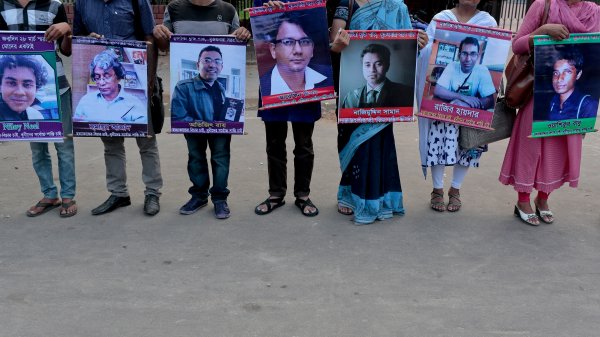 Bangladesh Police Say Killer of Secular Bloggers Is Dead
Next Up: Editor's Pick