Four years ago, the Russian horizontal jumper Alexey Fyodorov fell less than an inch short of qualifying for the London Games. Had he thrown himself into that leap just a little bit harder, he might have gotten his chance at Olympic gold. But he took the set-back “philosophically,” he says, and put his hopes in the Rio Games.

Back home in Smolensk, he worked with his father, a professional coach, to perfect his skills in the triple jump, getting a running start and gliding as far as he could over a sand pit, over and over again. “For 50 years, my father’s dream was for one of his pupils to reach the Olympics,” says Fyodorov, a tall 25-year-old with short, dark-blonde hair and serious eyes. “It turned out that I was his best pupil.”

In the years that followed, Fyodorov cemented his position at the top of Russian athletics, and he was all set to compete in the Games that kick off in Brazil this summer—until one of the biggest doping scandals in sports history derailed his plans. An investigation conducted by the World Anti-Doping Agency exposed an elaborate, state-sponsored doping program, and all Russian athletes were subsequently banned from international competition.

Read More: How Russia Is Trying to Charm Its Way Out of an Olympic Doping Ban

On June 20, just two days after the International Olympic Committee upheld that ban, Fyodorov came to compete in the national track-and-field championships in Cheboksary, a city on the Volga River some 430 miles (700 km) away from Moscow. Like the other athletes, he was deeply shaken by the ban. “Ahead of the ruling, I was feeling more positive every day,” he says. “But after they kept the ban in place, no matter how I try to distance myself, it’s really hit my nerves hard. I’ve fallen into a pit, and I now need to find a way out.”

The terms of the ban did leave one narrow window of hope. If individual athletes can prove that they have not been “tainted” by Russia’s doping program, they can apply for an exemption to the ban. The deadline for such applications is set to run out on July 4, and more than 80 Russian athletes have filed for this sort of “exceptional eligibility.”

Read More: Caitlyn Jenner on How Olympic Stardom May Have Stalled Her Transition

But the only Russian to receive it has been Yuliya Stepanova, the same athlete who first exposed her country’s doping program two years ago. In a statement on July 1, the world governing body of athletics, known as the IAAF, confirmed that Stepanova had been cleared to compete in Rio as an “independent neutral athlete.” The statement also commended the Russian whistleblower for “having made a truly exceptional contribution to the protection and promotion of clean athletes, fair play and the integrity and authenticity of the sport.”

Her peers back in Russia would not speak so highly of Stepanova. Since the ban was imposed, they have been subject to a battery of additional checks, and a team of ten international monitors has been deployed in Russia to look for any signs of doping at national competitions. One of them, a Dutchman named Dagmar Kagie, watched from the sidelines in Cheboksary as the athletes made their way off the field to the changing rooms. “Russia has been put under a magnifying glass,” says the monitor, who works for German anti-doping company PWC.

But even with all the added scrutiny, some of the competitors have tried to cheat or avoid probes. One athlete even ran out of the stadium to escape a spot test, according to a progress report on Russia that the World Anti-Doping Agency published in mid-June. “The people who would test positive will do whatever they can to avoid getting caught,” Kagie tells TIME, “even if it means quitting halfway through a race because that’s when they hear they’ll be tested.”

In Russia, though, the watchers are also being watched. Before accepting the mission in Russia, Kagie had heard that Russian security agents would likely try to interfere. In its most recent report, the World Anti-Doping Agency accused the Russian authorities of intimidation, threats to deport the agency’s staff, and efforts to keep the urine samples of Russian athletes sealed away in secret military sites that are off-limits to foreigners.

Such tactics came up early in Kagie’s mission. When he and the other monitors showed up at the Cheboksary stadium, they were interrogated by a man “who wanted to know everything,” he says. “Our visa details, what hotel we were staying at, even our room numbers.”

The man refused to identify himself, so Kagie could not confirm his suspicion that he was an agent of the FSB, the domestic intelligence agency that has been accused of hiding if not also orchestrating the Russian doping program. Whoever was behind the interrogation, Kagie says it added to a “general atmosphere of intimidation,” and he plans to report the incident up the chain of command—potentially impacting further decisions on the status of Russian athletes.

The alleged role of the FSB, which took over from the KGB after the fall of the Soviet Union, has been at the center of the doping scandal for months. In a damning report published in the New York Times in May, the former head of Russia’s anti-doping laboratory, Grigory Rodchenkov, described in detail how the FSB had assisted in the cover up.

According to his account, the tainted urine samples of Russian athletes were switched for clean ones during the Winter Olympics in Sochi through a special hole that had been made in the wall of his testing lab. The man who unsealed the supposedly tamper-proof urine bottles containing the samples was an agent of the FSB, Rodchenkov told the Times.

Asked to comment on these allegations, Russia’s sport minister Vitaly Mutko told TIME that he wasn’t aware of any FSB presence at Russian doping labs. “I wasn’t there to see what was going on,” he says. “We have to investigate the claims.”

Officially, the Kremlin has dismissed Rodchenkov’s claims of a state-run doping program as “the slander from a turncoat.” But he wasn’t the first insider to make such allegations. That would be Stepanova, the middle-distance runner, who acted as the key witness in the investigation that led to the ban on Russian athletes.

“You have to dope, that’s how it works in Russia,” Stepanova, who also competes under her maiden name, Rusanova, said in a German documentary film that first sparked the investigation in 2014. “Functionaries and coaches tell you very clearly that you can only get so far with your natural skills. In order to get medals, you need help. And that help is doping.”

She should know. In 2013, Stepanova was banned from international competition for two years after testing positive for doping. That ban urged her to reveal the pressures she faced in Russia to cheat. But back home, her revelations turned her into a pariah. A spokesman for President Vladimir Putin referred to her as “Judas” for betraying the country. Her fellow athletes tend to agree, especially as she is likely to compete in the Rio Games not under the Russian tricolor but the “neutral” flag of the International Olympic Committee.

“Stepanova is getting a chance,” the pole vaulter Anzhelika Sidorova tells TIME after placing second in the national championships. She pauses before recalling Stepanova’s own history of doping in a softer tone: “It was her choice,” says Sidorova. “We took a different path. I guess this is how she ‘won’ an opportunity for herself.”

At the mention of Stepanova’s name, the two-time Olympic champion in pole vaulting, Yelena Isinbayeva, goes uncharacteristically silent. “I don’t want to talk about this,” she says, her eyes blazing.

But the sporting officials in Moscow do not plan to slink quietly away from Russia’s expulsion from the Rio Games. The Russian Athletics Federation is planning to sue the sport’s world governing body at the Swiss-based Court of Arbitration. Some Russian athletes are also planning to contest the ban in separate lawsuits. Among their top complaints is how vague the rules have been for winning an individual exemption to the ban.

“The rules for athletes are changing every day,” Yury Borzakovskiy, the head coach for Russian track-and-field, tells TIME. “We’re being treated as total outcasts, made fools out of. That’s not right.”

Even if some of the athletes on his team do get a ticket to Rio, they might still be barred from competing under the Russian flag. “It’s like going into a battle, and not representing anyone,” says Borzakovskiy, himself a former Olympic medalist.

Given a chance to compete under a “neutral” flag, some athletes say they would rather stay home. “I don’t just represent myself, I represent my country,” says Isinbayeva, the celebrity pole-vaulter. “There are no grounds to deprive me of that right. Russia is not at war.”

For Isinbayeva these were supposed to be the final Olympics of a career that propelled her to national stardom. She is a household name in Russia, a fixture on magazine covers and TV talk shows. Isinbayeva was also the biggest crowd-pleaser by far at the tournament in Cheboksary. After three years on maternity leave, her fight to return to the world stage has become a national cause célèbre, and the home crowd roared when she cleared the bar to become the national champion once again.

But it wasn’t exactly the type of arena that top athletes dream about. Fyodorov, the triple jumper, likes to close his eyes during the competition and pretend he’s at the world championship in Rome or the Diamond League in Stockholm. It gives him a moment of solace before he remembers that he’s still in Cheboksary, surrounded by the sparse crowds of pensioners who bothered to spend the 50 rubles, or about one dollar, that it costs to enter the Soviet-era stadium. It is a far cry from the electrified masses and glory of the Olympics.

“Instead of going to those competitions which I love so much, I can only come here, to the Russian championship, with the same people you’ve known forever, no spectators or a sense of real competition,” he says.

Even if he does get the chance to compete in Rio – under the Russian flag or a neutral one – he realizes the hardest part lies up ahead. With all the attention bearing down, “it is going to be very, very hard to compete there. Very hard,” he says. The Olympic dream was his life’s ambition four years ago; now it makes a look of anxiety fall over his face. 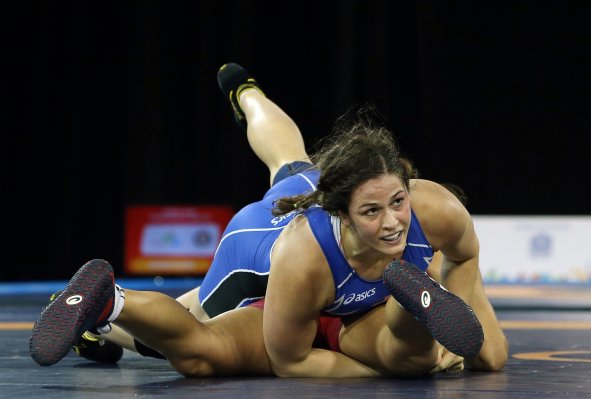 Meet The Female Wrestler Looking To Make History In Rio
Next Up: Editor's Pick