Arrival of Syrian Refugees in U.S. Surges in June

By David Johnson and Andrew Katz

The number of Syrian refugees who have arrived in the U.S. nearly doubled in June as the Obama administration aims to make good on its pledge to resettle at least 10,000 by the end of the fiscal year.

In all, 5,186 Syrian refugees have arrived in the U.S. since Oct. 1, following President Obama’s directive to step up resettlement efforts—and 2,381 of them arrived in June, according to records updated by the Refugee Processing Center, operated by the State Department.

To meet its goal, the U.S. must accept 4,814 more over the next three months. This fiscal year’s total already well exceeds the 1,682 Syrian refugees taken in during the previous year, but pales in comparison to the 4.8 million Syrians who have fled the war, now in its sixth year.

Millions remain in the neighboring countries of Lebanon, Turkey and Jordan; the flow of people leaving Syria also contributed to refugee crisis in Europe, which ended its calendar year having taken in some 1 million migrants and refugees.

The screening process by which the U.S. admits refugees is complex, and even more so for Syrians, spanning on average 18 to 24 months. TIME broke down this process in a Q&A with Jana Mason, a senior adviser to the U.N. High Commissioner for Refugees, which refers Syrian refugees to the U.S. for resettlement.

Even if the administration hits its target, the 10,000 figure is overshadowed by Canada, which government records show has welcomed more than 28,000 Syrian refugees since early November. 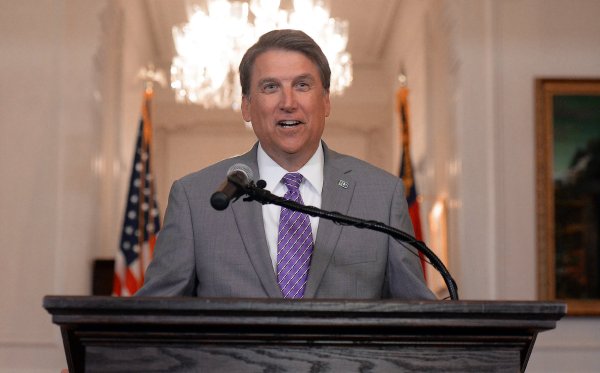 The Tight North Carolina Governor's Race Is Being Fought by Outsiders
Next Up: Editor's Pick