Hannah is the author of the new book The Best “Worst President”—What the Right Gets Wrong About Barack Obama.

In a recent speech lambasting Hillary Clinton, Donald Trump made a number of claims untethered to reality. According to Trump, Clinton’s email server “was easily hacked by foreign governments—perhaps even by her financial backers in Communist China—putting all of America in danger.” Yet, according to reporting by the New York Times, government officials insist there is no evidence the server was ever hacked. Trump also touted that he, unlike Clinton, “was among the earliest to criticize the rush to war [in Iraq], and yes, even before the war ever started.” Yet NBC News checked this claim and noticed Trump publicly supported the invasion of Iraq while on Howard Stern’s radio show back in September of 2002.

Donald Trump is not an empiricist. He does not seek out knowledge for the sake of knowing more and then use that knowledge to make political arguments. He treats information as instrumentally—rather than intrinsically—valuable. He has a preconceived idea of the world and is suspicious of any facts that confront that idea with cognitive dissonance. There’s a phrase that describes this type of person: a conspiracy theorist.

Merely five years ago Donald Trump was the leader, not of the Republican Party, but of the “birther movement.” Back then, Trump carried on his years of rumormongering and doggedly insinuated that President Obama was not born in the United States. After both Hawaii’s Republican governor and the official in charge of state health records personally inspected and publicly affirmed the validity of the president’s original birth certificate, Trump said “nobody has any information” about where the president was born.

This know-nothingness re-emerged when Trump met with a group of conservative Evangelical Christian leaders in New York City. Trump said, “We don’t know anything about Hillary in terms of religion.” He continued in his own baffled and baffling way, “She’s been in the public eye for years, and yet there’s no—there’s nothing out there… It’s going to be an extension of Obama but it’s going to be worse, because with Obama you had your guard up. With Hillary you don’t, and it’s going to be worse.” Aside from Trump’s insinuation that Obama’s Christian faith isn’t genuine (the product of another conspiracy theory) and the paranoid style of these remarks, it is pure fantasy to suggest “there’s nothing out there” about Hillary Clinton’s religious beliefs. (For one, Elizabeth Dias’ feature “Hillary Clinton: Anchored by Faith” from two years ago.)

Republican Party leaders often demure when the Clinton campaign calls their party the “party of Trump.” But at least in one way it is: It has become the Party of Fantasy. It strives to create its own reality—on everything from climate change to economic policy—rather than respond to the reality that exists. In an interview with Ron Suskind in the New York Times Magazine back in 2004, a senior Bush administration official criticized Suskind and journalists for being “in what we call the reality based community [who]… believe that solutions emerge from your judicious study of discernible reality.” This official went on to say, “That’s not the way the world really works anymore… We’re an empire now, and when we act, we create our own reality.”

Despite Christianity’s teaching that “pride goeth before destruction, and a haughty spirit before a fall,” Trump’s rhetoric is consistent with this emphasis on reality-creation. He sees the world in absolutes, with the clear-cut heroes and villains, as if the fight against ISIS were an eighties action movie. He conducts his politics in pithy tweets with lots of exclamation points. He reduces his opponents to juvenile monikers and critiques journalists on whether they’re “nice” to him or not.

In Suskind’s article, a frustrated Republican adviser to Ronald Reagan and George H.W. Bush characterized the younger President Bush’s understanding of America’s enemy in a way that might resonate as a description of Trump: “He believes you have to kill them all. They can’t be persuaded, that they’re extremists, driven by a dark vision. He understands them, because he’s just like them… This is why he dispenses with people who confront him with inconvenient facts.” We saw this resistance to inconvenient facts when Trump denied that his campaign manager manhandled a reporter when video footage indicated otherwise. We saw Trump’s casual relationship with reality when he claimed that the “Obama administration was actively supporting Al Qaeda in Iraq,” that Ted Cruz’s father “was with Lee Harvey Oswald” before President Kennedy was assassinated and that “crime is rising” in America. It’s gotten to the point where those checking the facts are simply throwing their hands up in exasperation or laying their heads down in exhaustion.

The contest between Donald Trump and Hillary Clinton isn’t so much a contest of conservatism versus liberalism, isolationism versus internationalism, outsider versus insider, or incivility versus tact. It’s a contest of the fantasy of one man versus the reality of the rest of us. 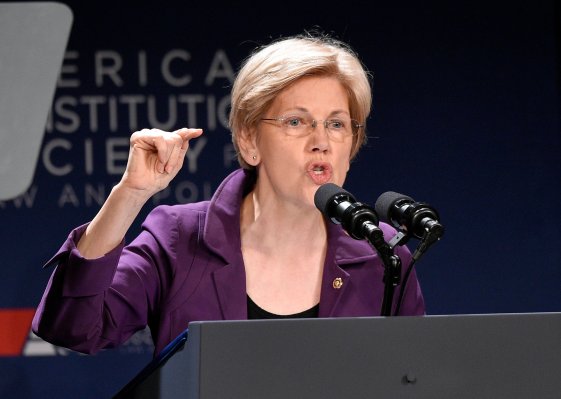 Trump Is Terrified of Strong Women
Next Up: Editor's Pick