My Mom, a Mexican Immigrant, Taught Me to Love America

The grave of Natalia Alonzo, which features a new American flag.
Cristela Alonzo
Ideas
By Cristela Alonzo
Alonzo is a comedian and the star of the show Cristela.

My name is Cristela Alonzo, and I am part of the legacy left behind by my mother, Natalia Alonzo. She died in front of me when I was 22.

She had been sick on and off for a couple years, but it wasn’t until the last year of her life that a doctor told us that my mom had suffered numerous strokes throughout her life. Each had weakened her heart every time.

I was living in Los Angeles and had to move back to my hometown, San Juan, Texas, to take care of her. We moved in with my sister, and my mom and I shared a tiny bedroom. Sometimes she would keep me up at night because she was in pain. The last time she got sick, she knew it was different. I knew it was different. We called an ambulance and when they came, I rode with her to the hospital. She didn’t get better. I saw her take her last breath.

This story is important because today marks the end of Immigrant Heritage Month. We talk about immigrants often, but rarely do we give them a soul, a face, a name. We think about them as if they’re not real people and instead anonymous nouns. But the immigrant I’m writing about, Natalia Alonzo, had a soul, a face, a name. And she died trying to give her family a better life.

My mom was very cynical but full of hope at the same time. She lived an extremely hard life but was still so grateful for the little she had. She had a second-grade education and came from a village in Mexico that had no electricity and no running water. The men treated women like property: If a man “wanted” a woman, he would “take” her from her house, and she’d have to marry him. She was taught that she and her sisters were always second to her brothers. Her family had no food so a lot of times my mother would run around in a mountainside full of rattlesnakes and eat whatever berries and plants she could find, not knowing if they were dangerous or not—hey, it was food.

My mom’s biggest dream was to come to the United States. This country represented hope for her and her family, especially my siblings and me. I’m the youngest of four. My oldest brother was born in Mexico; the rest of us were born in the United States. When my parents had both my brother and sister here, most people would assume they’d stay because they had American children. But they went back to Mexico and lived there for around eight years. My parents came to the U.S. when they and my oldest brother had visas.

My dad left my mom. I guess his American Dream involved him being single. My mom fended for four children while trying to get her and my brother “resident alien” status, which means you’re allowed to be a legal resident of the country but do not have to be a citizen. (And yes, you pay taxes.) After multiple tries, my mom and brother were granted resident alien status. For my mom, it was the best thing that had ever happened in her life.

You see, my mom loved this country, and she taught us to love it too. My mom taught us to value the big things that some of us take for granted, like having electricity and having water available to us from a faucet without having to go to a well. After I was born, my family lived in an abandoned diner. We were squatters, trying to survive. We had very little but my mom taught us to appreciate what we had. She taught us the United States was the land that gave us a chance at life.

Today, my brothers are teachers. My sister manages a call center. And I’m a stand-up comedian. I think at times, we’re all amazed at how well we did, considering our circumstances, but our version of success is different from what most people might consider success to be.

We like to remind ourselves about our struggles because we can’t believe how far we’ve come. We have food to eat. We can pay our bills. And, if we’re sick, we can go to the doctor. Growing up, we could barely afford food, much less medical attention. That’s how my mother died. She couldn’t afford to go to the doctor, so she never went. But by building a life for her children in the United States, my mother made it possible for her children to get access to health insurance, for the first time, through our jobs.

My mom came to this country so her kids could have a fighting chance. And every single thing my family has in our lives is due to this country giving us the chance to work hard to get it. My oldest brother—the one who wasn’t born here—is a perfect example. Yesterday, I came to visit him in our hometown because he took the oath to become a U.S. citizen. He, along with hundreds of others, made the choice to voluntarily leave all legal ties to their homeland to pledge allegiance to their new homeland. I cried as everyone stood up and raised their hand. I cried as the judges listed off all the countries represented by the people in the room. I cried when a woman spoke to our new citizens and told them that June 29, 2016, was a day they should always remember because today marked they day they were born as Americans. It was their American birthday.

When I heard those words, I realized one thing: My brother’s new life as an American stems from my mother’s death. I don’t think my mom realized how amazing she was for making her journey. My mother took care of her children to make sure we had a shot at life, and in order to do that, she willingly sacrificed hers.

She also taught us to be grateful. And so I want to thank this country on her behalf. You allowed my brother to legally become one of us. You helped our family carry my mother’s legacy to a place we never thought we’d get to. We are a family taught to love the United States by a woman born in Mexico.

Natalia Alonzo was an immigrant. She had a mind, a heart and a soul, as does everyone who comes here—either to avoid death or to find a better life. 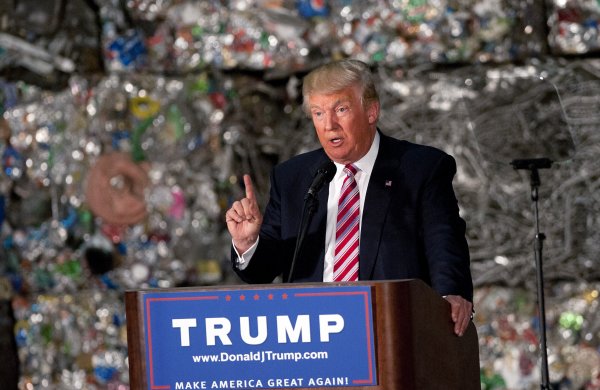 Nothing Donald Trump Says on Immigration Holds Up
Next Up: Editor's Pick