Saeed Mazhaev, a former ISIS militant from the Russian region of Chechnya, was still in his teens when the Syrian civil war broke out in 2011. He had never even seen the inside of an airport, let alone the inside of a jihadist training camp, when he decided to volunteer as a fighter in that war. Online, he had found a vast community of Russian-speaking Muslims sharing viral videos from the battlefields of Syria—gruesome clips of beheadings, explosions, fighters brandishing Kalashnikovs—and encouraging others to join. “After watching enough of those videos I made up my mind,” he says. “I had to go, to help.”

At the time, thousands of other young men from across the former Soviet Union were flooding into Syria, mostly from the predominantly Muslim regions of southern Russia and the formerly communist states of Central Asia, such as Uzbekistan, Kyrgyzstan and Kazakhstan. In the last few years, volunteers from this part of the world have distinguished themselves as some of the fiercest fighters—and some of the top commanders—in the terrorist army known as ISIS. And according to Turkish authorities, these Russian-speaking militants may now have started going on missions outside of their self-proclaimed caliphate in Syria and Iraq.

Read More: Turkey’s Hurting Tourism Industry Could Be the Next Victim of the Istanbul Attack

On Thursday, Turkish officials and the international media reported that the suicide bombers who struck Istanbul’s main airport two days earlier, killing at least 43 people and wounding more than 200 others, hailed from Russia, Uzbekistan and Kyrgyzstan. During a session of parliament held the same day, Turkish Interior Minister Efkan Ala said that the attack was likely carried out by ISIS, though no group has yet claimed responsibility. The Turkish newspaper Yeni Safak, which often acts as a mouthpiece for the ruling government, reported that the suspected mastermind behind the attack is a Russian national named Akhmed Chataev. In its terrorist watchlist, the U.N. has identified Chataev, an ethnic Chechen, as the Islamic State commander in charge of training Russian-speaking militants.

Police in Russia said on Thursday that they are looking into these reports. But the news will not come as much of a surprise to Russian counter-terrorism officers like Major General Apti Alaudinov, the deputy minister of interior in Chechnya. In his tiny, mountainous republic, Islamic extremism has long been “a form of protest,” he says. “It’s like the punk-rocker kids we used to have. Except in this case, the form of protest leads them straight to Syria.”

The reasons vary from country to country, but in Russia, the Islamist underground has its roots in the two wars for independence that Chechnya fought in the 1990s. After Russia finally regained control of the region in 2000, the separatist forces in Chechnya adopted an increasingly radical strain of Islam and began to wage a guerrilla war against the Russian authorities and their local proxies. Devout Muslims were often recruited to join these insurgents, and from their hideouts in the mountains and forests of southern Russia, they organized regular terrorist attacks deep inside Russian territory, including a series of suicide bombings that struck in Moscow as recently as 2011. “But now the flow [of insurgents] to the mountains here has stopped,” says Alaudinov. Russian security forces had killed or co-opted most of their top leaders, whose idea of creating an Islamic caliphate in the mountains of southern Russia began to seem like a lost cause. “Nobody goes there in the past few years.”

Instead they go abroad to join ISIS. As of March, around 3,400 Russian citizens had gone to fight alongside this terrorist group in Syria and other parts of the Middle East and North Africa, according to Russia’s counter-extremism police force. At least another 2,500 Islamic State fighters have come from the former Soviet nations of Central Asia.

In some sense, that exodus has been a blessing for Russia. As the influx of foreign fighters into Syria intensified in 2013, the total number of terrorist attacks registered inside Russia declined by 30%. The following year, when ISIS declared the creation of a caliphate in parts of Iraq and Syria, the number of terrorist attacks in Russia fell by half, according to the FSB, Russia’s state security service.

Read More: This Is How the Next U.S. President Should Fight—and Defeat—ISIS

By the time he arrived in Syria in July 2013, Mazhaev could see why this was happening. “There were Russian-speakers all over the place, they were in every outfit, in ISIS, in Al Qaeda, everywhere,” he says. Mazhaev met Islamist fighters from various Russian regions at the safe house in southern Turkey that they used as a transit hub for foreign volunteers. His fellow Chechens vouched for him there, helped him buy a uniform and other gear in Turkey, then brought him across the border to join a unit called Caucasus Emirate, which was comprised entirely of fighters from the Russian Caucasus region. About four months after he joined, Mazhaev says, most of the unit merged with ISIS.

They were not the first ethnic Chechens to do so. Before being killed in a U.S. airstrike in March of this year, the top military commander of ISIS was a Russian-speaking jihadi named Tarkhan Batirashvili, who went by the nom de guerre Omar the Chechen. Like Chataev, whom Turkish authorities now reportedly suspect of organizing Tuesday’s bombings at the airport in Istanbul, Batirashvili hailed from the former Soviet republic of Georgia, which borders Russia to the south.

Both of them lived with their families for years in Georgia’s Pankisi Gorge, which was used as a redoubt and supply line for Chechen rebel fighters during their wars against Russia in the 1990s. The military experience they gained through conflicts in the former Soviet Union have made them especially valuable to the leaders of ISIS. For young Chechens following the war online, the fact that their kinsmen occupy such senior roles in this terrorist organization “has been a big recruitment pull,” says Joanna Paraszczuk, a journalist whose blog, Chechens in Syria, tracks Russian-speaking militants involved in the Syrian civil war. “They have a reputation for being really good fighters.”

But before this week’s Istanbul bombings, they have not been known to take part in suicide missions far away from ISIS-controlled territory. This could now be changing. The U.S.-led bombing campaign against ISIS strongholds—which rolled back the group’s territory in Iraq and Syria—seems to have pushed the group to strike targets further afield, including recent attacks in Paris and Brussels.

For Moscow, this shift would be particularly alarming. The flight of Islamist recruits to Syria over the past few years may have brought a lull in terrorist activity on Russian soil. But that trend could quickly be reversed if those recruits start coming home with a few years of experience earned on the front lines in Syria and Iraq. Chataev, who is wanted in Russia on terrorism charges, would seem to be of particular concern. According to the U.N. Security Council, he is responsible for “training and redeploying” Russian-speaking militants from Syria back to Russia, with the aim of setting up terrorist cells and staging attacks.

“That is our main concern,” says Alaudinov, the police commander in Chechnya. “When people return we need to watch them, to punish them as the law allows, and then do everything possible to reintegrate them into society.”

In these efforts, Mazhaev is a success story. After returning home from Syria in early 2014, he was sentenced to a short stint in prison for the crime of “participating in a foreign conflict against the interests of the Russian Federation,” a new law intended to discourage Russian citizens from joining the Syrian civil war. Once he was released, the authorities in Chechnya gave him a place to live in the regional capital, Grozny, as well as counseling and opportunities to work and study.

Over the past year, Mazhaev has also become a sort of anti-recruiter, giving talks around his home region on the dangers of extremist propaganda. It is a valuable effort, but it won’t do much good for the thousands of Russian-speakers already fighting in Syria. “They see themselves as part of a global jihad,” Mazhaev says. And their targets, too, are increasingly becoming global. 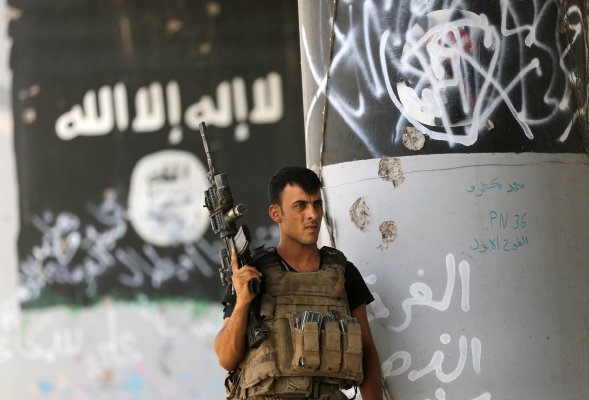