Inside Detroit’s Radical Experiment to Save Its Public Schools

Students enter the Cass Technical High School in Detroit, on May 5, 2016.
Carlos Osorio—AP
By Josh Sanburn

When Detroit students return to school on Sept. 6, the rodents and mold found in classrooms last year will be all but gone. Cracked windows will be repaired. Collapsed ceilings patched up. Chipped paint removed. Last year, not a single Detroit public school complied with the city’s public health and safety codes, one reason teachers protested with widespread sick-outs that temporarily crippled the system. This year, 92% of schools are in full compliance.

The most significant changes for the country’s most challenged big-city school system, however, will be right beneath the surface. Beyond cleaned-up classrooms, Detroit’s students will return to a brand-new district altogether—one that isn’t saddled with mountains of debt. This new district is the result of a radical idea: that ailing public entities such as school systems could be overhauled like a bankrupt business.

In June, Republican Governor Rick Snyder signed a sweeping education package to provide financial support for Detroit’s public schools modeled on the 2009 restructuring of General Motors. The legislation left the old district behind as a shell to pay down $515 million in operating debt, similar to GM’s Chapter 11 that created an “old” and “new” General Motors, with the aim of restructuring a public school system that was all but bankrupt. Millions of dollars were allocated to repair the district’s aging facilities, and the legislation allowed the schools—which include some of the nation’s worst and have been under state-run emergency management since 2009—to return to a locally run school board. “DPS is fiscally sound now,” says John Walsh, Gov. Snyder’s director of strategy. Snyder’s use of state-appointed emergency managers has been widely scrutinized since the water crisis in Flint, where lead leeched into the municipal water supply while the city’s finances were being overseen by the state. The water crisis raised questions about Snyder’s reliance on state managers to step in and fix local issues.

The unprecedented experiment is being closely watched by other struggling urban public school systems around the U.S. “There are quite a number of districts that are ending up on the brink of bankruptcy,” says Robin Lake, director of the Center on Reinventing Public Education, a research organization at the University of Washington that supports charter schools. “There’s a lot of attention on Detroit.”

But public school advocates worry that the legislation does nothing to ensure that DPS will be able to provide quality education in the long term to compete with the growing number of charter schools throughout Detroit. Some even argue that lawmakers may have opened the door to an all-charter system—and potentially the end of the Detroit public schools altogether.

The rise and fall of Detroit’s schools mirrors the city itself, which once had one of the biggest school districts in the country, hitting peak enrollment in 1966 at 299,962 students. But the decline of Detroit’s automobile industry brought a dramatic, decades-long population slide for the city and its schools, with white residents especially leaving the city for the suburbs.

In 1994, Michigan legislators passed Proposal A, which shifted education funding from local property taxes to state taxes in an effort designed to equalize the quality of the state’s schools across affluent and low-income areas. The New York Times called it “the nation’s most dramatic shift in a century in the way public schools are financed.” The state tied funding directly to enrollment, meaning the more students a district had, the more money it would get. Proposal A also ushered in the city’s first charter schools, which would get state funding but operate independently of existing school districts, something so dramatic TIME put the realignment on its cover in October 1994 under the headline: “New Hope for Public Schools.” The population in Detroit, however, kept falling, and the district had difficulty adjusting to the annual loss of students and routinely budgeted for more students than actually enrolled.

As funding declined, the district was constricted across the board. Facilities weren’t properly maintained. Teachers were let go. Class offerings were cut. And parents increasingly opted for charter schools, leading to further DPS enrollment cuts. Over the last 25 years, Detroit’s population has declined by 34%, but public school enrollment has gone down 73%, and by 2012, charter schools were educating more students in Detroit than public schools. The school district now has fewer than 50,000 students. Academic performance, meanwhile, has plummeted. According to the National Assessment of Educational Progress, just 5% of Detroit’s fourth-graders were proficient in math in 2015 compared to 34% statewide; 6% were proficient in reading compared to 29% across Michigan. By most measures, DPS is the worst-performing urban school district in the state.

Students like Imani Harris have experienced DPS’s problems up close. Two weeks into the fall semester last year, her English teacher at Renaissance High School quit and the school couldn’t find a qualified permanent replacement, leaving the 10th-grade English class to lumber along for months with a series of rotating substitutes. “It wasn’t really a class. I wasn’t learning any English,” Harris says. “A lot of times, I just did other homework. There was a lot of anger because we were promised we were going to get a real teacher.”

Contributing to Detroit’s problems is a tangled web of a dozen authorizers that determine where charter schools can open or close. Many of those authorizers are public universities and community colleges that often don’t work together to plan comprehensively, which can create chaotic situations in some neighborhoods. According to Detroit Mayor Mike Duggan’s office, 80% of Detroit’s public and charter schools have opened or closed in the last seven years.

“It’s the Wild West,” says David Arsen, an education policy professor at Michigan State University. “There’s nothing like it in the country. Charters are giving out computers and sneakers just to get the kid in the door. National advocates for charters are looking at Detroit and saying, ‘Don’t do it that way.’”

In January, DPS’s teachers began protesting the district’s deteriorating conditions by calling in sick en masse. In May, so many teachers held “sick-outs” that they effectively closed 94 of the city’s 97 public schools.

That same month, the Michigan legislature passed a series of bills that amounted to a bailout of the district. Lawmakers gave $617 million to Detroit’s public schools—$450 million to help retire the district’s debt and $150 million in transition costs to create a new district. Proponents say the measures allow the district to start fresh while returning the schools to local control under an elected school board rather than state-appointed emergency managers, who had been in charge for the past seven years. “We wiped their slate clean,” says Jeff Farrington, a Republican in the Michigan House.

DPS officials, however, say the amount of money for transition costs is nowhere near what they need. Alycia Meriweather, the DPS’s interim superintendent, says that $105 million of the $150 million allocated to help get the new district up and running is already earmarked for financial obligations from the old district while only $5 million is available for repairing school facilities. While Detroit will be able to spend all of the $7,400 that is allocated per student on actual education costs this year—as opposed to last year, when $1,100 of that funding per student went to pay the district’s debt—the district still has needs that won’t be met, including at least eight schools that still need facility upgrades.

“People need to have clear expectations on what can be done with the money that’s been allocated,” Meriweather said.

The new law also gives the school board the option of hiring non-certified teachers and allows penalties for teachers who stage “sick-outs,” measures opponents of the bills say are designed to put additional pressure on protesting teachers and unions.

“It’s basically saying, How dare you teachers stand up for yourself?” says Terrence Martin, a spokesperson for the Detroit Federation of Teachers, the local union. “This is a way to keep our voices down.” He adds that allowing uncertified teachers in Detroit’s classrooms is a “slap in the face to the profession.”

Walsh, Gov. Snyder’s director of strategy, says the legislation only gives school boards the option of bringing on non-certified teachers, potentially allowing schools to hire teachers who may have occupational experience in a subject in which they don’t have a teaching degree. As of late August, there were roughly 160 general education teacher vacancies, and opponents of the legislation say there still aren’t enough incentives for quality teachers to come to DPS.

A common complaint among public school advocates is the need for a single authorizing body that would determine which schools could open and close. Walsh says Gov. Snyder fully embraced the idea of an authorizing commission, but many in the charter community were worried it would have unilateral control to limit charters. It ultimately wasn’t included in the final legislation.

The debate over DPS’s future “should be about improving academic outcomes for kids,” says Dan Quisenberry, president of the Michigan Association of Public School Academics, one of the largest lobbying groups for charters. “And if DPS can’t provide that higher performance, the system shouldn’t be protected.” Quisenberry says MAPSA was opposed to the an authorizing board because its members would have been appointed by the mayor, something he believes would’ve turned the board into a political body.

The legislation does include some changes for charters, including a new accreditation process that will reduce the number of authorizers, while an advisory council will gather data to determine where new schools should open. But public school supporters are still concerned that the growth of charters will continue unabated, eventually forcing DPS to fold entirely. “Detroit is right on the cusp of getting rid of the traditional district,” says Arsen, the Michigan State education policy professor.

Detroit’s problems are often considered an outlier, but urban public school districts in Chicago, Philadelphia and Cleveland are also struggling with declining attendance figures and structural deficits amounting to tens of millions of dollars. Michael Griffith, a finance analyst for the research group Education Commission of the States, says lawmakers with ailing districts will likely be watching Detroit’s new district to see whether the legislation stabilizes the public school system.

“You might see other states look and say, ‘Can we do that with some of our failing districts?” Griffith says.

Parents and students, meanwhile, are becoming accustomed to the dysfunction. Arlyssa Heard, a member of 482Forward, a group of local parents who raise awareness about the state of the schools, has a son who will start fifth grade this year and has already been in three different Detroit schools so far—one public, one charter, one private. She knows parents who have kids in charters and public schools and hears complaints from both sides.

“We have people making decisions who do not have children here and don’t know anything about what educators are facing in the classroom,” Heard says. “My dream is that there is some way to take this decision out of the hands of politicians and put it in the hands of educators and parents. Those are the two groups that have the most vested in the school system.” 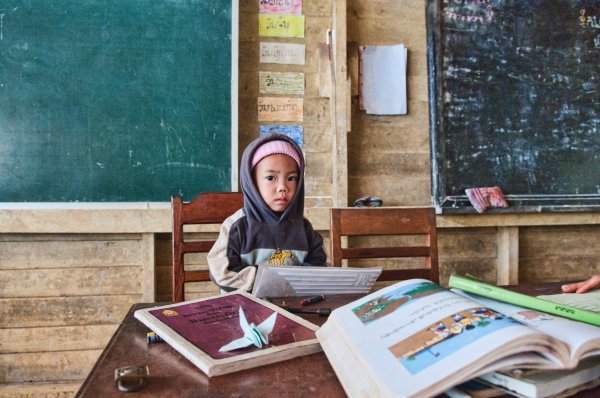 U.N. Says Universal Education Not Likely 'Until 2084'
Next Up: Editor's Pick