If you didn’t spend your morning standing on the bridge of the Starship Enterprise and then talking to George Takei, the actor, author, activist and playwright who created the role of Lt. Sulu in the original Star Trek series, well, that’s just because you weren’t at the Intrepid Sea, Air and Space Museum in New York this morning. TIME was lucky enough to be there for a preview of the museum’s interactive Star Trek exhibit, which opens on July 9, and streamed our conversations with Takei and NASA astronaut Mike Massimino live on Facebook.

The talk was mostly space and science, but Takei had other things on his mind too. As part of the conspicuously multi-cultural cast of the original Star Trek, Takei has always felt deeply about the importance of a color-blind and race-blind society. And as a person who spent part of his childhood in an American internment camp — just one of the 120,000 Japanese-Americans rounded up in the hysteria that followed Pearl Harbor — he knows a thing or two about what happens when xenophobia and racism overtake reason. On that score, as the video shows, he has some strong words for presumptive Republican nominee Donald Trump. 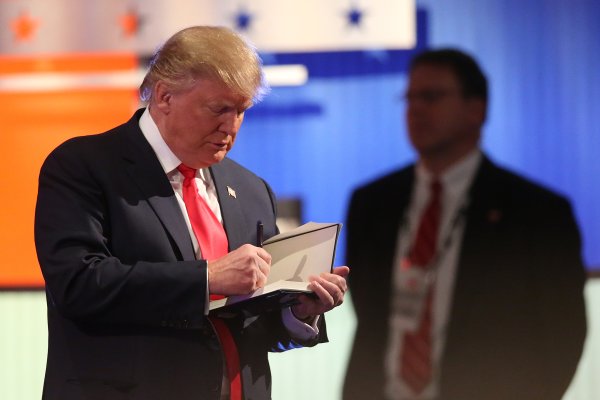 Donald Trump, Our Great American Novelist
Next Up: Editor's Pick