The Navy has ordered nine of its officers and sailors to walk a plank in connection with Iran’s seizure of two small U.S. vessels in the Persian Gulf in January. A lengthy chain of human errors—both at sea and on land—combined with an engine failure, led to the international humiliation broadcast around the world, the Navy’s top officer said Thursday.

Admiral John Richardson, the chief of naval operations, said that Iran was able to hold 10 U.S. sailors for 16 hours after they and their immediate commanders failed to follow Navy rules and regulations.

While Richardson warned that the U.S. Navy should “strike fear into anybody who would want to take us on,” the final report he released into the seizure highlighted poorly-trained sailors ill-suited for a mission in the middle of one of the world’s most contested waterways. “I find the failures that were documented in this investigation to be a symptom of a poorly led and unprepared unit thrust into a confusing situation that they were unable to comprehend and react to, until it was too late,” Vice Admiral Kevin Donegan, commander of U.S. Navy forces in the region, concluded in the report, which was released five months after it happened.

Iran’s Islamic Revolutionary Guard took the sailors into custody at gunpoint Jan. 12, forcing them to kneel on deck with their hands clasped behind their heads. They were released unharmed, save for their pride, early the next day. The Navy found that a lieutenant and senior sailor aboard the two boats, and their local commander ashore in Kuwait, “were derelict in their duties in that they failed to meet even the most basic requirements of leadership, planning and tactical execution.”

Some sailors told the Iranians about the capabilities of their boats and provided them with passwords for personal laptops and cell phones. “It is clear that some, if not all, crew members provided at least some information to interrogators beyond name, rank, service number and date of birth,” the report said.

Three of the most senior implicated in the probe have been removed from command, likely ending their Navy careers. The remaining six also face such non-judicial punishment that could scuttle theirs, as well.

The inquiry criticized a pair of the captured Americans for making “statements adverse to U.S. interests” and for allowing the U.S. sailors to eat food provided by the Iranians while being filmed by the Iranians. But it praised the lone female U.S. sailor for “her extraordinary courage in activating an emergency beacon while kneeling, bound and guarded at Iranian gunpoint, at risk to her own safety.”

If those punished had planned the mission correctly—and paid attention to their maps and charts—the two so-called riverine boats, each about 50 feet long, never would have strayed into territorial waters claimed by Iran around its heavily-defended Farsi Island in the middle of the gulf. Iran released the sailors, following a flurry of diplomacy by Secretary of State John Kerry, after holding them on the island overnight. “I didn’t want to start a war with Iran,” one of the boat captains told Navy investigators. “My thought at the end of the day was that no one had to die for a misunderstanding.”

If it weren’t so serious, some of the crew’s missteps would be funny. They failed to realize they were closing in on Farsi Island because they neglected to enlarge a “purple dot” that appeared on their navigation screen. “Had any crew member zoomed into the purple dot,” the report noted, “they would have discovered the purple dot was Farsi Island.”

The good news, if any, contained in the report was that the boats didn’t initially drift off course due to some mechanical malfunction. The bad news is that the boats sailed off course deliberately due to the negligence of those aboard. The crew compounded its errors when the engine on one of the boats failed, and they didn’t report the problem up the chain, even after seeing Farsi Island.

The sailors, who were supposed to be traveling on a 297-mile trip from Kuwait to Bahrain, veered off their proper course shortly after their voyage began, trying to make up for a late start, according to the Navy probe. And while the boats reported their location back to shore, their shore-based comrades failed to act.

Iran violated international law by holding the sailors at gunpoint and videotaping them in captivity, the report concludes, although it acknowledges Iran was within its rights to investigate the boats once they entered Iranian waters. 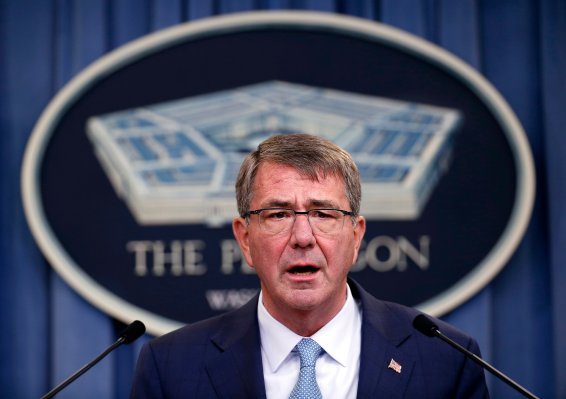 Transgender Troops Can Serve Openly
Next Up: Editor's Pick