When you’re Samuel L. Jackson you can demand pretty much whatever you want and you might even get it.

The actor famously insisted that the working title for the movie “Snakes on a Plane” become the actual title for the film, saying the ridiculous title was the whole reason he took the film. And as Jedi Master Mace Windu in the Star Wars universe, Jackson personally asked George Lucas if he could buck Jedi convention and have a purple lightsaber, a demand Lucas initially denied but later acceded.

Now, Jackson might be trying to resurrect the dead.

In an recent Q&A on social media, Jackson was asked why his character, Mace Windu, was killed at the end of Star Wars Episode III—Revenge of the Sith. (To recap: Emperor Palpatine uses Force lighting to attack Windu, causing him to fall out of the window of a very tall Senate Building.)

“In my mind I’m not dead,” Jackson said. “Jedi’s can fall incredibly high distances and not die.”

Asked by Entertainment Weekly to elaborate on his position that Mace Windu survived the fall against all odds, Jackson doubled down. “Jedi’s can fall from amazing distances and there’s a long history of one armed, one handed Jedis.[sic]” Jackson said he told Lucas he thought Windu was still alive, to which the creator of the Star Wars universe replied, according to Jackson, “I’m OK with that. You can be alive.”

Lucasfilm was picked up by the Walt Disney Company in 2012 and Lucas no longer has an official role in developing the films, but remember, this is Samuel L. Jackson, who says he still has his Mace Windu lightsaber in his desk drawer at home, which, Jackson says, has the letters BMF inscribed on the on button.

We can’t tell you what the acronym stands for but Google should be able to help you out. 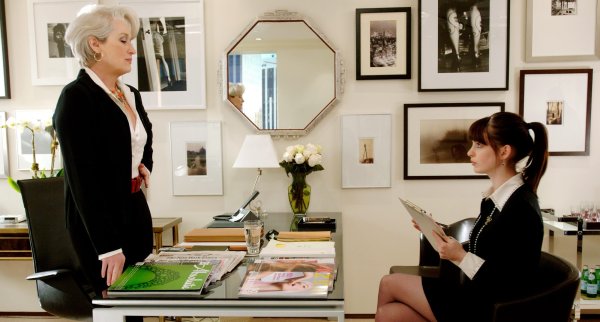 13 Things You Never Knew About The Devil Wears Prada
Next Up: Editor's Pick