A grizzly bear attacked and killed a mountain biker riding along a trail outside Glacier National Park in Montana on Wednesday.

Brad Treat, 38, and another unidentified rider were at the Halfmoon Lakes area of the Flathead National Forest, Flathead County Sheriff Chuck Curry told the Associated Press. The grizzly bear knocked Treat off his bike, and the other rider left to find help.

Authorities found Treat’s body, but not the bear. The other rider was not injured. On Wednesday evening, wildlife and law-enforcement officials were searching for the bear, and they have closed the area for public safety.

Since the 1970s, grizzly bears in the mainland U.S. have been designated a threatened species. Now that their numbers are increasing, so are encounters between humans and bears. There are about 1,000 grizzly bears in the area, called the Northern Continental Divide System.

Officials say that each year at Glacier National Park, there are usually one or two non-lethal encounters between bears and humans. The last fatal encounter at the park was in 1998. 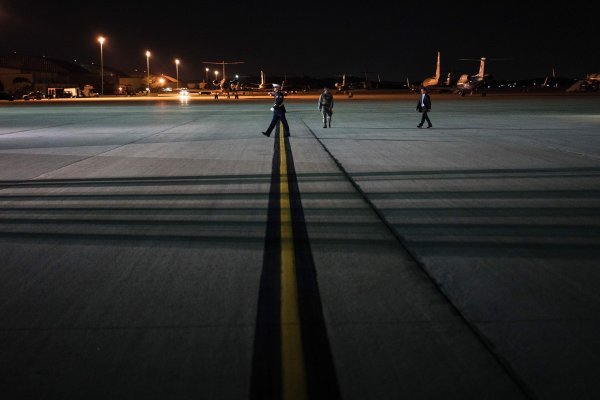 Joint Base Andrews Lifts Lockdown After Report of Active Shooter
Next Up: Editor's Pick