Seth Rogen and his wife Lauren Miller want to bring a little joy to folks with sadness in their lives. Shortly after Rogen first met Miller’s mother, Adele, she was diagnosed with early-onset Alzheimer’s at the age of 55. Since, the couple has stumped to raise awareness of the disease, raising over $5 million for Alzheimer’s research.

The couple’s annual Hilarity for Charity variety show promotes Alzheimer’s awareness and raises money for in-home care grants for families affected by the disease; the show hit the road this year after five years in Los Angeles, coming to New York City. But their efforts have extended beyond the stage: In 2014, the star of Neighbors 2 and creator of Preacher testified in front of a senate committee in favor of federal funding for Alzheimer’s research.

TIME: Have you heard any personal stories that particularly affected you?

Lauren Miller: That’s how we started doing an event is because young people contacted us and said, ‘Thank you for being young people and talking about it because so rarely do young people talk about this.’ It’s usually older people. But since we started our grant program, where we give free care to people who need it, we get thank you notes—like Seth ran into someone—

Seth Rogen: I ran into someone who received one of our grants at the airport just randomly.

Miller: —who was there because she had someone to care for her mom. I just remember one line from one of the thank you notes, which was: “Thank you for the chance to join humanity again,” which is really amazing and wonderful that we get to do that.

I imagine for you it’s both fulfilling but also sometimes difficult to dedicate so much time to something so personal.

Miller: At first it was hard, and it would bring me down a lot every time I thought about it. It was like, I have to think about my mom again. But now we’ve helped so many people, and I’ve gotten to see such a bright side of something that had such a dark side. Even when something is so bad, you can find some good in it.

Doing an event is a great way to make money, and it’s our way of bringing some happiness and some light to something that is sad.

Around the time when I was probably getting old enough and famous enough to actually understand that I should probably be using that fame to draw attention to something is around the time that all this started to happen. In [my] 20s, I was aware that other people were doing charitable things, but it was not on the forefront of what I was thinking about, nor did I have a cause or anything that I felt that strongly about, or would be able to intelligently talk about.

So it really was a moment where this was happening in my personal life, and at the same time, I was like, ‘I could actually really help bring attention to this thing.’ But it was mostly Lauren that encouraged me to do this. I probably wouldn’t have done it on my own.

The Bud Light commercials you star in with Amy Schumer have addressed social issues like equal pay and gay rights. How did those come to be?

It was part of the draw of them, honestly. That was their pitch— they wanted to do a beer campaign that has a socially progressive commentary to it. And it was shocking. But I strongly believed in the things that they were promoting—and I drink beer. I was shocked, honestly, that they did it.

And my producing partner, Evan Goldberg, directed them and worked on writing them also. So we were just talking about the other day—we can’t believe they’re airing these things! It’s amazing. And I’m sure it’s very alienating to a lot of their customers. But I’m very impressed by it. 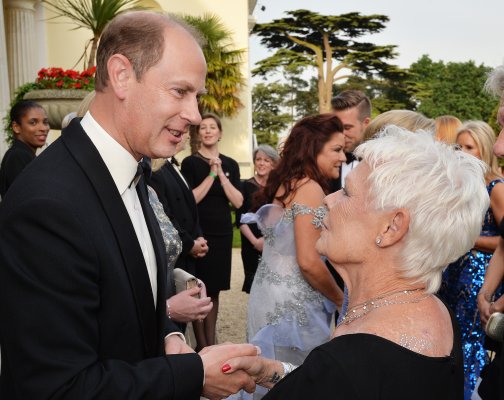 Judi Dench Proves She's the Hippest Dame Around with New Tattoo
Next Up: Editor's Pick