With the sixth season of Game of Thrones officially in the books, it’s time to start looking ahead at what next year will have in store for the show’s major players. But first, a quick recap.

In Sunday’s finale, “The Winds of Winter,” Daenerys finally began her journey across the Narrow Sea, a move that has not only been in the making since season one, but will undoubtedly shake up the political playing field of Westeros as we know it. The Mother of Dragons and her group of loyal followers —including Tyrion, her newly named Hand of the Queen — are headed straight for King’s Landing, where a strategically placed wildfire explosion paved the way for Cersei’s uncontested ascension to the Iron Throne.

But the former Queen Mother won’t be ruling over a united continent, as several of the seven kingdoms are still in open rebellion against the Lannister crown — including, of course, the North.

At Winterfell, the recently resurrected Jon Snow was just declared the King in the North on the basis that Ned Stark’s blood runs through his veins. However, moments earlier, viewers learned that this was in fact untrue. During a flashback scene to the Tower of Joy, it was revealed that Jon is not actually Ned’s bastard, but rather the son of Ned’s sister, Lyanna Stark, and Daenerys’s brother, Rhaegar Targaryen.

This confirmation of the fan-favorite R+L=J theory almost certainly sets the stage for Daenerys and Jon to come face to face in season seven, a meeting many believe will reveal the meaning behind the title A Song of Ice and Fire and potentially lead to a marriage between the two.

We know what you’re thinking: wouldn’t that be incest? And yes, you’re right. Not everyone in the Thrones universe is open to sexual relationships between relatives — hence the stigma surrounding Cersei and Jaime’s relationship — but the Targaryens are notorious for it. Having spent over 300 years wedding brother to sister in order to keep their bloodline pure, a union between an aunt and her nephew seems within the realm of possibility.

Now, here’s where things get interesting. Jon and Dany have both been declared the One Who Was Promised — a prophesied savior in the religion of R’hllor who is the reincarnation of legendary hero Azor Ahai — by two different Red Priestesses of the Lord of Light, Melisandre and Kinvara, respectively. And at this point in time, there is a strong argument to be made in support of either camp — namely, that each has experienced a seemingly miraculous rebirth.

The prophecy of the One Who Was Promised decrees the One is destined to “lead the people against a darkness,” i.e., the White Walkers, by wielding a flaming sword called Lightbringer. When Melisandre believed Stannis to be the One, she mistakenly dubbed his sword Lightbringer — in reality, the sword has yet to make an appearance.

But while Lightbringer may be the key to Westerosi salvation, there’s a twist to the story. In the legend of Azor Ahai, the warrior was forced to stab his wife with Lightbringer in order to impart the blade with its full power. So if Jon and Dany do get married, one of them may end up having to sacrifice the other in order to fulfill their destiny and prevent the end of humanity.

And yes, we’re aware the original version of the prophecy uses the word “Prince” instead of “One,” leading many to believe it could only refer to Jon. However, as Maester Aemon mentions in the books, in High Valyrian, the word “prince” is considered gender-neutral.

Strap in Thrones fans, these final two seasons are going to be a wild ride. 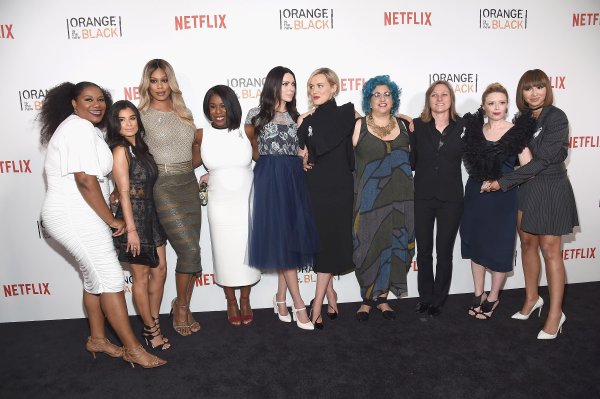 Nielsen Unveils Ratings Data For Orange Is The New Black
Next Up: Editor's Pick