Leadership Battles Are Embroiling Both Major U.K. Parties in the Wake of Brexit

Lights illuminate Big Ben and the Houses of Parliament on June 24, 2016, in London
Matt Cardy—Getty Images
By Simon Lewis

The British public’s seismic vote to leave the European Union last week has already toppled Prime Minister David Cameron, who immediately announced he would step down within months, sparking a leadership race among the Conservatives.

But rather than standing ready to step in as the ruling party deals with a major fissure over Brexit, the U.K.’s main opposition, Labour, is also in disarray. The party’s legislators overwhelmingly supported a vote of no confidence on Tuesday against their veteran left-wing leader Jeremy Corbyn, who is accused of offering only lukewarm support for the campaign to remain in the E.U.

Corbyn has refused to step down, and he retains the support of the majority of the party’s membership, who vote to elect the leader under party rules. The Labour lawmakers behind what has been called a coup against Corbyn reckon that under his leadership they face defeat at a general election, which is a possibility in the coming months given the political upheaval caused by the Brexit vote.

On Thursday, a former member of the shadow cabinet, Angela Eagle, is expected to launch a formal challenge for the leadership. The BBC reports that she has the support of the requisite number of lawmakers to trigger a leadership vote.

Considered a party loyalist, Eagle held the shadow cabinet’s business brief until she resigned on Monday, writing that “we need a leader who can unite rather than divide the Labour Party.” Eagle has been the Member of Parliament for Wallasey, in the northwest of England, since 1992, and served in several junior positions in Labour governments of the past decade.

After Cameron announced his intention to resign, Leave campaign leader Boris Johnson emerged as a candidate to lead the Conservatives, and therefore become Prime Minister. But sections of the party with doubts over his ability to lead the country have also sought a “Stop Boris” candidate.

Home Secretary Theresa May is Johnson’s main rival. May supported Remain — albeit quietly — but supports restrictions on immigration, a major factor for Leave voters. In a surprise announcement Thursday morning, Michael Gove, the Justice Secretary, announced that he would also stand. Gove, who campaigned to leave alongside Johnson, said in a statement that he had “come, reluctantly, to the conclusion that Boris cannot provide the leadership or build the team for the task ahead.”

Former Secretary of State for Defense Liam Fox, Work and Pensions Secretary Stephen Crabb and MP Andrea Leadsom have also indicated they will run for leader, in a race that will see Conservative MPs select two candidates to be put to a postal ballot of party members.

With both Conservative and Labour leaders having backed the Remain campaign, the result of the June 23 referendum — in which almost 52% of voters picked Leave — represents a major challenge to the two parties that have dominated British politics for more than a century. Particularly for Labour, a failure to reconcile its broad church of supporters could be terminal; rebel legislators are reportedly already discussing the formation of a new party closer to the political center if Corbyn stays.

The winner of the Conservative leadership race, meanwhile, will take over the country at a time of economic upheaval caused by the Brexit vote, and will be charged with initiating and negotiating the U.K.’s divorce proceedings from the European Union. 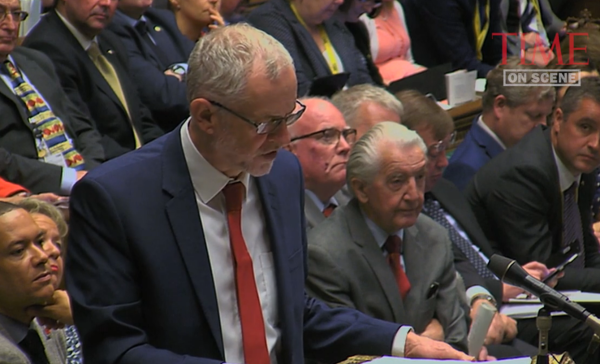