Coming Out Is an Ongoing Part of My Life

We talk about coming out as if it’s something you only do once. In my experience it’s an ongoing part of life. Sometimes it’s easy, and other times it makes my stomach flutter.

I first came out as a lesbian 30 years ago when I was still in college. Initially I was very careful about whom I shared this tender information with. In 1985 being gay felt both like being part of a special club and living in a freak show. Over time, I widened the circle of people that I told. Sometimes I was praised for being courageous, and other times I was treated with contempt or confusion. One of the more memorable responses to my coming out was when my sister-in-law’s 60-year-old mother said, while we were cooking Thanksgiving dinner: “I’ve seen that on the Phil Donahue show, but never met one before.”

In 1991, my partner Rinda and I had a service of commitment in our Unitarian Universalist Church. Most of our family members came, and as far as I was concerned, I was out to the world. It was a done deal.

Little did I know that becoming a parent would force me to be out in whole new way. It started at my daughter’s birth in the hospital, where I had to justify my relationship with my own child at every change of shift. Some nurses were tickled pink to be working with an “alternative” family. But others were confused, offended or outright hostile. Looking back, I wonder how well I explained the situation, sleep deprived as I was.

At restaurants, waitresses would casually ask: “Who’s her mother?” Rinda and I would stare at each other, unprepared at first. Eventually we learned to say: “We both are. We’re a couple.”

“We both are. But Rinda’s her birth mom, if that’s what you’re really asking.”

By the time we had two kids, with the same donor but two different birth moms, the story of our how our family came to be was often more than we wanted to convey to a casual inquiry before ordering drinks. And yet, we wanted our children to hear us talk easily about our family structure and learn how to explain it themselves. Their experience of having two moms was nearly invisible in popular culture. We wanted to make it a source of pride, not shame.

I never expected to be a wife or have a wife, but now I am one and I have one. It’s turned out to be the best thing ever, because that single word conveys so much, so clearly. Without any further explanation, total strangers understand my relationship to Rinda. “Girlfriend,” “partner,” “life mate” require more sentences to be certain that I’m being understood. But “wife” is completely clear.

The federal legal recognition that came last year brought more ease and clarity to my life than I had expected. After all, we’d been married in our hearts and souls since 1991. And our marriage was recognized in the state of California. What could a federal blessing of our marriage give us that we didn’t already have?

It turns out, a lot. Now that we were “out” to the federal government, when we got a mortgage we knew how to hold title. In the past we had long conversations with the title company; and all of us were just making a guess about the best way for us to hold title as a couple that was legally married in California, but not at the federal level.

When I fill out our Federal Financial Aid forms for college, I don’t have to leave out a parent. In the past I felt like I was holding back information, but there was no way to represent our reality because federal tax returns (the basis for the form) did not recognize both parents. I even called to make sure I was doing it right. The woman on the phone was kind, but told me that the financial aid form simply did not include a way to represent the reality of our family.

Changing laws is important to creating the just, multicultural society the U.S. Constitution promises. Changing hearts and minds is equally important in making that dream a reality. As we make these changes, our coming out stories change as well.

I’m part of a Facebook group for queer moms. Lately there has been a string of posts from women about their experiences with hospitals. The common theme is that they start out ready to fight to have “our family” recognized in Utah, or a in Catholic hospital. But instead they are met with respect, joy and clarity about filling in birth certificates, NICU visitation privileges, or being called “Mom.” Those stories bring tears to my eyes. Wow! The pace of change of beautiful.

And yet the moral arc of the universe doesn’t easily bend toward justice. There are always steps backwards, like the North Carolina HB2. We can’t let those who are afraid of widening the circle of love and justice decide the parameters of the conversation.

My favorite coming out moments are the ones that shine a light on my own prejudices. The times I was met with love and respect from the very people I had been taught would hate me filled my heart with grace. The military officer who told me that part of his duty was to stand with gay and lesbian service people who were being drummed out of the service because of their sexual orientation. My 80-year-old, devoutly Catholic aunt who told me that God loves everyone and doesn’t make any mistakes. The grandmother at my children’s elementary school, a Jehovah’s Witness, who apologized with tears in her eyes that her grandson had teased my daughter about having two moms. Each of those encounters taught me to put away my assumptions and treat people as individuals.

The potential cost of coming out is rejection. But the cost of being hidden, of living in shame, is far greater. And the opportunities that coming out affords are enormous. Coming out as a lesbian has given me the courage to come out as an artist, a writer, a Black Lives Matter activist and a person of faith. It’s allowed me to be more of my authentic self in so many ways, and hopefully gives others the courage to do the same. And it’s given people permission to tell me their stories of spiritual and personal growth, connecting us across differences, but reminding us of our shared humanity. 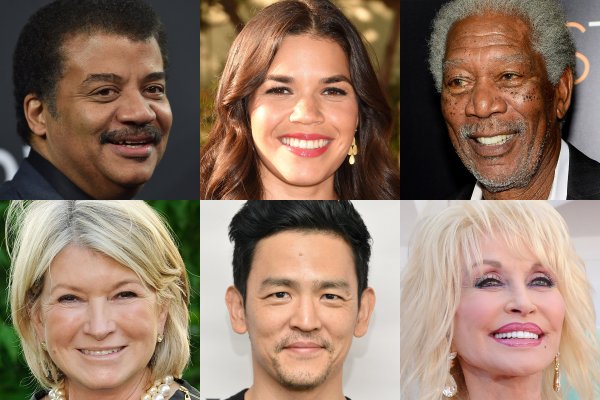 71 Celebrities Share Their Favorite Things About America
Next Up: Editor's Pick