Man Claims He Invented iPhone In 1992, Sues Apple for $10 billion

What if the iPhone was invented in 1992? Well, one man says it was.

A Florida-based man is suing Apple for $10 billion in damages, as well as royalties on all future Apple sales, for stealing his design for an “electronic reading device,” according to The Telegraph, which obtained a copy of the lawsuit. The lawsuit alleges that the plaintiff, Thomas Ross, actually designed an iPhone-like device in 1992, but it was subsequently “hijacked and exploited by Apple’s iPhones, iPods, iPads, and others,” according to The Telegraph.

In addition to the $10 billion, Ross wants 1.5% of all future Apple revenue.

Ross claims to have filed for the patent on the electronic reading device in 1992 and provided images of the drawings that accompanied the patent application in the lawsuit. The drawings show a rectangular device and a big screen that is both LCD-based and could be either “monochrome or color.” It also includes just about anything else one would cook up to throw into a handheld device, including solar cells, a “cellular phone antenna,” and even support for Microsoft’s MS DOS. His illustrations show the device could also support optional speakers and microphones, as well as page turning buttons, and much more.

The issue, however, is that the drawings in Ross’ filing include many features the iPhone has never offered. Chief among them is what he called in his drawings “a typewriter keyboard,” or physical keyboard that would sit below the display. Apple has only used a virtual keyboard since its iPhone launched in 2007.

There’s another potentially damaging issue with Ross’ filing: He doesn’t actually hold a patent on the technology. According to The Telegraph, while he filed for the patent in 1992, he failed to pay fees associated with filing patents and it was eventually deemed “abandoned” by the patent office.

But that hasn’t stopped Ross. According to The Telegraph, the lawsuit says Apple went “dumpster diving” with its iPhone design. He reportedly added in the lawsuit that Apple caused him “great and irreparable injury that cannot fully be compensated or measured in money.”

Still, $10 billion would go a long way in perhaps making that pain feel a bit better. And on the off chance he were to win his case against Apple, who knows? He might just be able to score a few more bucks from other companies that sell rectangular devices with screens. 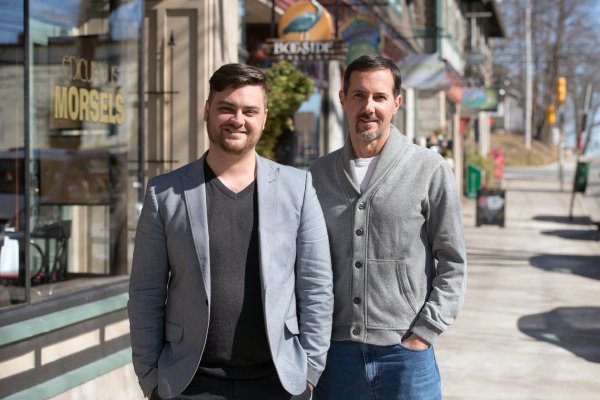 How This Startup Founder Triumphed Over His Year of Hell
Next Up: Editor's Pick