Facebook chief executive and founder Mark Zuckerberg speaks during a 'town-hall' meeting at the Indian Institute of Technology (IIT) in New Delhi on October 28, 2015.
Money Sharma—AFP/Getty Images
By Alex Fitzpatrick

Facebook, the world’s largest social network, is constantly engaged in an algorithmic balancing act. The mathematical calisthenics serve just one purpose: Keeping you, me, and Facebook’s other 1.65 billion users coming back for more. After all, every time we visit, Facebook gets another fraction of a cent in advertising revenue. Pretty soon, that adds up to real money — $5.2 billion in the most recent quarter.

Everything Facebook does, then, can best be understood as a means to find new users or getting the existing ones to stick around. To that end, the Menlo Park, Calif. firm announced on Wednesday significant changes to how it picks what visitors see on their News Feed, Facebook’s term for the stream of updates that essentially function as its homepage. More frequent will be the baby photos from your high school friends and career updates from your distant cousin and news links from friends. Less common will be articles and information directly posted by brands and publishers, TIME among them. (The changes follow similar tweaks last year.)

Over a billion people already visit Facebook every day. But Facebook believes that these tweaks will help it increase that mind-boggling number even more.

“Our success is built on getting people the stories that matter to them most,” reads a blog post from Facebook executive Adam Mosseri. “If you could look through thousands of stories every day and choose the 10 that were most important to you, which would they be? The answer should be your News Feed.”

There is, understandably, much consternation in the media world about these changes. Digital publishers often rely on Facebook for a great deal of traffic to their websites, which in turn helps them generates advertising revenue of their own. Any decrease in that flow can put business plans at risk. (Still, there is a beacon of hope for publishers. These changes might cause a drop in traffic from outlets’ own Facebook pages, but the savviest newsrooms will create content that compels readers not just to click and open a story, but to share it on their own pages as well.)

By far the more interesting story, however, lies in how Facebook announced its new changes. There were the requisite blog posts, of course, introducing the tweaks in obtuse language that can leave even social media professionals scratching their heads. But for the first time, Facebook also published what it considers the “values” behind how it ranks posts in the News Feed.

That is no small thing. Facebook is notoriously quiet about how the News Feed actually works. (Though it did reveal some details to TIME last year.) On one level, it’s understandable that a company would like to keep its secret sauce under wraps. After all, as far as revenue is concerned, News Feed is essentially Facebook’s only product.

But given the increasing influence Facebook has over our lives, its secrecy has invited suspicion and controversy. It was just two years ago that Facebook engaged in a now-infamous study into whether it could alter users’ moods (It could.) More recently, some Facebook employees have wondered if the site wields the power to sway this year’s presidential elections. (It probably does.) And, of course, there was the uproar over reports that conservative viewpoints were being suppressed from the site’s “Trending” module. It’s this firestorm that likely led to Facebook’s publishing of this document in the first place.

So what do Facebook’s “values” tell us about the company? Mostly, it’s that Facebook views itself as a place, first and foremost, for loved ones to connect with each other. It wants you to think of it as a digital extension of the family dinner table or Friday night at the bar. “Facebook was built on the idea of connecting people with their friends and family,” reads the document. “That is still the driving principle of News Feed today.”

While publishers may fret over the changes, this aligns more closely with how Facebook users view the site. While many visitors stumble across news on Facebook, less than half of users actively go looking for it there, according to Pew.

Still, it’s wrong to say that Facebook doesn’t care about “news.” It just views “news” differently than many in a New York newsroom might. In Facebook’s eyes, the fact that your ex-roommate has an exciting new job is just as much “news” to you as the latest outrageous thing Donald Trump said. The key difference is personalization. News outlets can tell you what’s happening in the broader world, but we have no idea what’s going on with the people you care about most. Facebook can do both.

Regardless, this doesn’t mean Facebook will be absent of capital-J journalism. Friends and family will always post about the events they care about most and the social network is making sure to highlight those articles. And of course, every family has that one uncle who won’t shut up about politics, and you’ll definitely still see his ranting, raving and link-posting too. In that case, another Facebook feature may come in handy: The “mute” button. 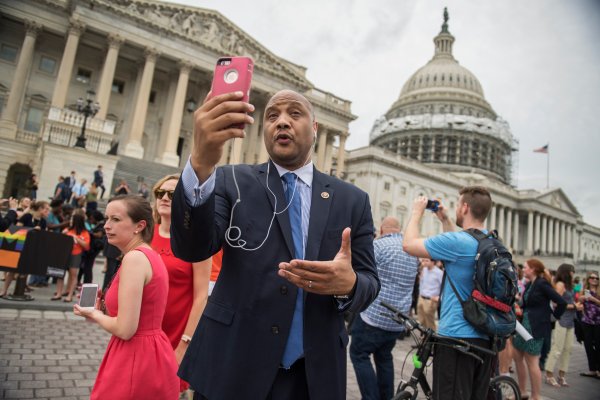 How Periscope Is Changing Politics
Next Up: Editor's Pick