E.U. Leaders Warn Britain There Will Be No Favors in Brexit Negotiation

European Union leaders have warned Britain not to expect an “a-la-carte” approach to the bloc’s policies as they negotiate their exit, but after a two-day summit there remained little clarity on exactly how and when Britain will untangle itself from the bloc.

British Prime Minister David Cameron arrived in a Brussels gripped by regret and recrimination on Tuesday for his final summit of E.U. leaders. Over a dinner of poached veal tenderloin with seasonal baby vegetables, he told the 27 other heads of government that he was sorry Britain had voted to leave the E.U. in the June 23 referendum, and said he wanted the country to continue to have a close relationship with Brussels.

But while the other leaders may have expressed sadness and even a little sympathy for the outgoing Prime Minister as they polished off a dessert of fresh strawberries, they left him in little doubt that there would be no special treatment for the U.K.

“Leaders made it crystal clear that access to the single market requires acceptance of all four freedoms including the freedom of moment,” said Donald Tusk, the President of the European Council, referring to the free movement of goods, services, capital and people. “There will be no single market a-la-carte.”

French President François Hollande and German Chancellor Angela Merkel also used their post-summit press conferences on Wednesday to take the same line, sending a strong signal to some ‘Leave’ campaigners who have insisted that Britain can retain all the benefits of the single market while putting controls on migration.

And despite suggestions on Tuesday from U.S. Secretary of State John Kerry that there were a “number of ways” for the Brexit vote to be walked back, Merkel made clear that the E.U. believed the result to be final and binding. “I see no way to reverse this,” she said.

In Brussels at least, the fact of Britain’s departure from the E.U. was one of the few matters where there was unity and clarity. But no timetable was set out for when the U.K. might actually leave; the British government has yet to trigger Article 50, the vaguely-worded clause in the E.U. treaty which kick-starts two years of exit negotiations.

Tusk, seemed willing to give the U.K. a pause before beginning the process. “Leaders understand that some time is now needed to allow the dust to settle in the U.K.” European Parliament leaders however want the formal request to leave as soon as possible to calm uncertainty in the markets but Cameron insists it is the job of his successor — who will likely not be in place until September — to decide when Article 50 would be invoked. Jean-Claude Juncker, the President of the E.U. executive branch, took a harder line, saying: “We don’t have months to meditate – we have to act,” while also chiding Cameron for creating the political atmosphere in Britain which led to the leave vote.

“My impression is that if you are over years, if not decades, telling your public that something is wrong with the European Union, that this European Union is too bureaucratic, too technocratic you cannot be taken by surprise if voters believe you,” he said.

Leaders turned to the question of how to reverse this mistrust when they met on Wednesday. Cameron was frozen out of those talks, which aimed to start a period of reflection to try and take the sails out of euroskeptics who are threatening referenda in other E.U. nations like France and The Netherlands. However, the bloc also remains divided over the best way to regain the trust of voters and prevent the E.U. splintering further.

Core nations like France, Belgium and Luxembourg believe the only way to save the E.U. is deeper political integration to bind the economies and foster financial stability. But fears of giving too much power to Brussels was one of the key issues of concern in the British vote, and many other leaders believe it would be a mistake to push further integration at this point.

Merkel insisted the debate was not about “more or less Europe, but [being] better in achieving the results and objectives”, and finding a positive vision to present to a public worn down by economic stagnation, high unemployment, and the migration crisis.

“When Russia many years ago sent the first people into space, America said ‘Now we have to send someone to the moon’,” she said. “We have to set a positive agenda, and positive goals, and try to show that we have an ambition and an aspiration to produce prosperity for our people.”

Also Wednesday, the Scottish First Minister, Nicola Sturgeon, was in Brussels to discuss potential legal options for Scotland remaining in the E.U, as the majority of Scottish citizens voted ‘Remain’ in the referendum.

She received a warm welcome — with citizens in so many corners of the union turning away from the E.U., officials in Brussels can ill afford to ignore the few who still share their vision of a united continent, albeit one now shorn of one its most valued members. 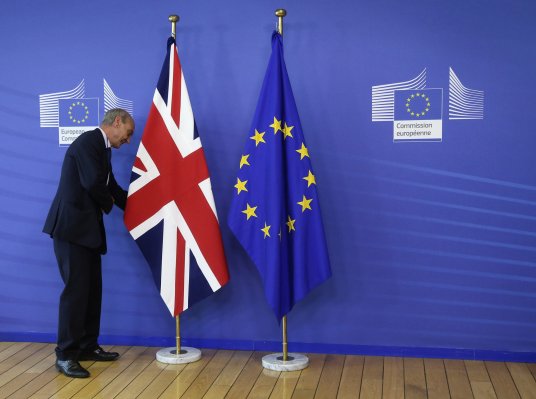 The British People Have Been Suckered
Next Up: Editor's Pick