A group of suicide bombers killed dozens and wounded more than 230 people at Istanbul’s main airport on Tuesday night, the latest and most devastating in a series of terrorist attacks in Turkey, a country that has become the new front line in the battle against terrorism.

Shortly before 10 p.m., gunfire and explosions ripped through the terminal of one of the busiest airports in the world, sending hundreds of panicked passengers running. Video captured a flash of explosions in an attack on Istanbul’s Ataturk Airport that killed at least 41 people, according to Turkish officials cited by news reports. While Turkey has experienced a string of recent terrorist attacks — including inside Istanbul, the country’s commercial capital — Tuesday’s shootings and bombing targeted the heart of the country’s civilian infrastructure.

Speaking at the airport, Turkey’s Prime Minister Binali Yildirim said that early signs suggested that ISIS militants carried out the attack, an assessment echoed by White House officials. “We are still collecting information and trying to ascertain what happened and who did it,” U.S. Secretary of State John Kerry told reporters at the Aspen Ideas Festival. “And I won’t comment further on it except to say that this is daily fare. That’s why I say the first challenge we need to face is countering nonstate violent actors.” No group has claimed responsibility for the killings so far.

Stunned passengers at the airport described a chaotic scene as they emerged from the terminal roughly an hour after the attack. Witnesses said at least two explosions took place, while others reported seeing and hearing gunfire. At least three attackers were killed, according to the Turkish authorities.

Mehmet Bars tells TIME that he was in the baggage claim, having just arrived from Germany, when the attack began. “I stayed down,” he says. “I go outside. Then one man said to me, ‘Don’t go inside, we must run.’ I run when I see the bomb explode.” He says he heard intermittent gunfire for another 20 minutes.

As Bars spoke, ambulances screamed in and out of the entrance to the airport. Police sealed off roads leading to the airport and established a cordon at the main entrance, at one point pushing back a scrum of confused civilians and journalists. A helicopter thumped overhead.

Witnesses say hundreds of passengers found themselves trapped inside the airport while security forces cleared the area. Later, stunned passengers began to stream out of the international terminal. One sobbing woman rushed to embrace another. A man stumbled out wearing what appeared to be a bandage on his forehead. Some held handwritten signs in the air as they attempted to locate friends and family they’d lost track of in the chaos.

“Me and my friend were sitting down having a cup of coffee and we saw people running so me and him thought, why are people running?” says Jan Arob, 31, from Afghanistan. “Then we heard three gunshots — pop pop pop — and from then it’s been four hours people running up and down, up and down in the airport.”

Others had the bewildering experience of landing as the attack was under way. Amit Pujari, a 23-year-old medical student, landed in Istanbul following a trip to Italy. “I think some shots were fired around passport control, because there was a bunch of shattered glass,” he says. “If there’s like 25 stalls you can pass through, the first five had shattered glass.”

Read More: Caught in the Middle of a Civil War Between Turkey and Its Kurds

The assault on the airport is one of the most devastating in a series of lethal attacks in Turkey over the past year, including multiple bombings in Istanbul and Ankara over the past several months. Turkish authorities have blamed ISIS for attacks on civilians, including tourists. A separate set of bombings claimed by Turkish Kurdish militants have primarily targeted security forces — most recently in Istanbul on June 7 — though civilians have also been killed in the blasts.

Those attacks have raised tensions between Turkey — a NATO member — and the U.S., which supports Syrian Kurds in their fight against ISIS. Peace talks between the Turkish government and the PKK — the Turkish Kurd group that both Washington and Ankara classify as terrorists — broke down last year, and the war between the two has become increasingly violent in recent months.

But suspicion for the Istanbul airport attack has mostly fallen on ISIS. Turkish President Recep Tayyip Erdogan, in a statement, said, “We urge the world, especially Western countries, to take a firm stand against terrorism. Despite paying a heavy price, Turkey has the power, determination and capacity to continue the fight against terrorism until the end … Make no mistake: for terrorist organizations, there is no difference between Istanbul and London, Ankara and Berlin, Izmir and Chicago, or Antalya and Rome.”

The attack bore eerie echoes of a similar terrorist strike against the Brussels airport earlier this year, though the Brussels attackers were able to get inside the terminal before they detonated their explosives. At the Istanbul airport, the first security check is outside the terminal — but even so, the crowds there, waiting to get inside the airport, proved to be a vulnerable target. 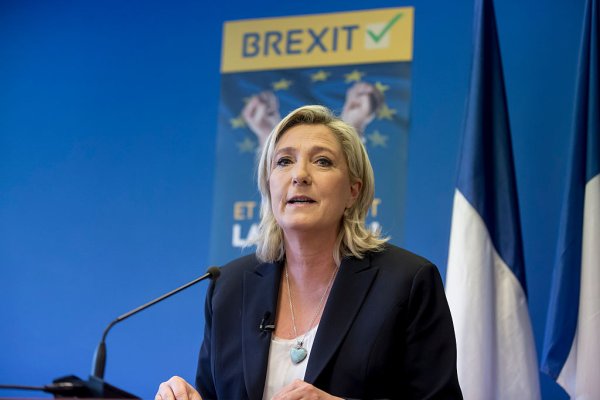 France's Marine Le Pen on Brexit: 'This Is the Beginning of the End of the European Union'
Next Up: Editor's Pick