With the aid of a teleprompter, Donald Trump on Tuesday repeated the defiant anthem of his campaign: selfish businesses are sending American jobs overseas, and politicians have let it happen by approving bad trade policies.

“Our politicians have aggressively pursued a policy of globalization, moving our jobs, our wealth and our factories to Mexico and overseas,” Trump said in a speech in Monessen, Pennsylvania. “Ladies and gentlemen, it is time to declare our economic independence once again.”

He said the United States should rip up its current trade deals if it cannot renegotiate them and crack down on “cheaters.” It was the most aggressive portrait of American economic policy Trump has yet given, one that squared with his campaign slogan, “America First.”

But that is not a vision Trump has always had.

In a blog post written just three years ago, Trump called for global unity and international economic interdependence, writing that there were important opportunities to do business in Europe. And in a 2005 essay, Trump said that outsourcing jobs is “not always a terrible thing,” arguing for a more nuanced view of shipping jobs out of the United States.

Trump’s views in those two posts bear little resemblance to his apocalyptic view of globalization today. Though Trump has long railed against bad trade deals, his call on Tuesday for America to cut off much of its commerce with the rest of the world is at odds with his past optimism about international economic cooperation.

In the aftermath of the global financial crisis, Trump wrote in 2013 said that businesses could work in a more unified world. Trump advocated for “global unity” and abandoning borders. “We will have to leave borders behind and go for global unity when it comes to financial stability,” Trump wrote.

“The near meltdown we experienced a few years ago made it clear that our economic health depended on dependence on each other to do the right thing,” he wrote. “We are now closer to having an economic community in the best sense of the term—we work with each other for the benefit of all.”

He wrote that Europe presented a good investment option for American businesses. “Europe is a terrific place for investment,” Trump wrote. “I am proud to have built a great golf course in Scotland after searching throughout Europe for five years for the right location. I’ve seen many beautiful places.”

By contrast, Trump on Tuesday called for an agenda of “America first,” also the name of a interventionist organization opposed to entering World War II.

And Trump charged politicians with helping American companies to move overseas. “Our politicians took away from the people their means of making a living and supporting their families,” he said on Tuesday. “Skilled craftsmen and tradespeople and factory workers have seen the jobs they love shipped thousands and thousands of miles away.”

But in 2005, Trump explained the merits of outsourcing jobs. “We hear terrible things about outsourcing jobs — how sending work outside of our companies is contributing to the demise of American businesses,” Trump wrote in 2005. “But in this instance I have to take the unpopular stance that it is not always a terrible thing.”

Trump has spoken in the past about how Americans are getting “ripped off” by foreign countries and bad trade negotiations, but he has built much of his financial empire through international brands that rely on foreign labor. Much of Trump-branded products, including his suits, ties, light fixtures, furniture, picture frames and other business lines are made overseas.

The Clinton campaign has repeatedly attacked Trump for moving jobs abroad. It has become a key pillar of their campaign: that Trump has hurt American workers through his businesses practices, in particular by moving jobs overseas.

“He’s been a hypocrite when it comes to talking about made in America, and then outsourcing jobs,” Sen. Sherrod Brown of Ohio, a prominent Clinton ally, said on a conference call with reporters on Tuesday. “The reality is Donald Trump lines his pockets at expense of American workers, period.”

Trump said in 2005 that business often need to move overseas to remain competitive. “I know that doesn’t make it any easier for people whose jobs have been outsourced overseas, but if a company’s only means of survival is by farming jobs outside its walls, then sometimes it’s a necessary step,” Trump wrote then. “The other option might be to close its doors for good.”

“Losing jobs is never a good thing, but we have to look at the bigger picture,” Trump wrote. 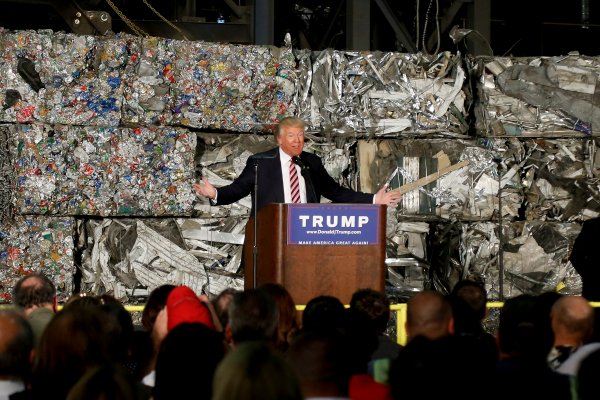 Read Donald Trump's Speech on Trade
Next Up: Editor's Pick