Warning: This post contains spoilers for season six of Game of Thrones.

After serving Walder Frey a pie made out of his two sons — Black Walder and Lothar — in the finale of Game of Thrones‘ sixth season, Arya Stark revealed her true face to the Lord of the Crossing before slitting his throat. Having crossed another name off her infamous kill list, the young assassin smiled as her victim bled to death. However, she may not deserve all the credit for concocting such a barbaric plan.

Back in the the tenth episode of season three, Bran tells the story of the Rat Cook, a legend in which a cook in the Night’s Watch killed the son of a visiting king, cooked him into a pie and served him to the king. In George R.R. Martin’s A Storm of Swords, it’s revealed that it was Winterfell’s Old Nan who originally told Bran this tale, meaning that Arya has undoubtedly heard it as well.

“The Rat Cook had cooked the son of the Andal king in a big pie with onions, carrots, mushrooms, lots of pepper and salt, a rasher of bacon, and a dark red Dornish wine,” Martin writes. “Then he served him to his father, who praised the taste and had a second slice. Afterward the gods transformed the cook into a monstrous white rat who could only eat his own young. He had roamed the Nightfort ever since, devouring his children, but still his hunger was not sated. ‘It was not for murder that the gods cursed him,’ Old Nan said, ‘nor for serving the Andal king his son in a pie. A man has a right to vengeance. But he slew a guest beneath his roof, and that the gods cannot forgive.'”

It’s no coincidence that Arya chose this particular method to take out Walder Frey — the man who orchestrated the Red Wedding, a.k.a. the most blatant violation of the sacred tradition of guest right that has ever occurred in Westeros.

The scheme also happens to be reminiscent of a scene in Shakespeare’s Titus Andronicus, a play in which the title character gets revenge against an enemy queen by tricking her into eating a pie made out of the remains of her two sons.

Moral of the story: be nice to your guests. 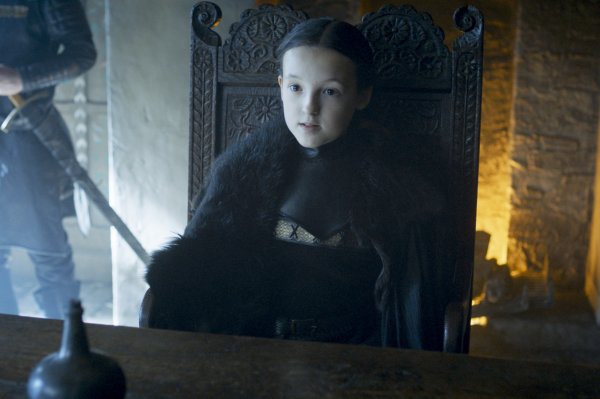 Here’s How Lyanna Mormont Blew Her Game of Thrones Castmates Away
Next Up: Editor's Pick