Donald Trump laid out an aggressive plan Tuesday to remake the country’s economic relationship with the world by scrapping existing trade agreements and threatening allies with economic sanctions.

“Hillary Clinton unleashed a trade war against the American worker when she supported one terrible trade deal after another – from NAFTA to China to South Korea,” Trump said in Monessen, Penn., as he stood before a wall of recycled aluminum scarp. “A Trump Administration will end that war by getting a fair deal for the American people. The era of economic surrender will finally be over.”

The plans he revealed threatened to effectively scrap a bipartisan consensus on dropping trade barriers that has governed U.S. foreign policy since the early 1990s. Here is a look at the specific steps he planned to take upon his election as president.

First, Trump set his sights on the TPP, the massive trade deal that would link the U.S. and 11 Pacific Rim nations. “I am going to withdraw the United States from the Trans-Pacific Partnership, which has not yet been ratified,” he said, calling the deal a “death blow for American manufacturing.”

President Obama signed the TPP in February and Congress is expected to ratify it before he leaves office. Trump has worked hard to tie Hillary Clinton to the deal; she helped negotiate parts of it while she was Secretary of State, but she’s since distanced herself from it and has said she will not support it.

“Hillary Clinton was totally for the TPP just a short while ago, but when she saw my stance, which is totally against, she was shamed into saying she would be against it too – but have no doubt, she will immediately approve it if it is put before her, guaranteed,” Trump said. (Clinton began backing away from TPP even before Trump entered the race, saying in May 2015 that she had some “real concerns” about the deal. She officially said she wouldn’t support the deal in October.)

Trump also announced his plan to withdraw the United States from NAFTA. “I’m going tell our NAFTA partners that I intend to immediately renegotiate the terms of that agreement to get a better deal, by a lot, not just a little, by a lot, for our workers,” Trump said. He said he will withdraw the U.S. from the agreement, which has been in effect since the mid-1990s and allows free trade between the United States, Canada and Mexico, if the other countries don’t comply. “They’re so used to having their own way,” Trump said, going off the script of his prepared remarks. “Not with Trump, they won’t have their own way.”

At the end of the speech, Trump turned to a favorite topic: China. The final three points of Trump’s seven-point trade plan concern China’s “currency [manipulation]” and “theft.”

First, “I am going to instruct my Treasury Secretary to label China a currency manipulator. Any country that devalues their currency in order to take advantage of the United States will be met with sharply,” Trump said. Ad-libbing, he continued, “And that includes tariffs and taxes.” This marked a sharp break from Republican orthodoxy of the last several decades, which is to oppose new taxes during election campaigns.

Trump argued that “China’s entrance into the World Trade Organization has enabled the greatest jobs theft in history.” According to the McKinsey Global Institute, the U.S. lost about 1/3rd of its manufacturing base between 2000 and 2010, some 6 million jobs, as TIME recently reported. Only about 700,000 were lost to China, through ‘tradable’ areas like apparel and electronics.

Trump also said, “If China does not stop its illegal activities, including its theft of American trade secrets, this is very easy. This is so easy, I love saying this. I will use every lawful presidential power to remedy trade disputes, including the application of tariffs, consistent with Section 201 and 301 of the Trade Act of 1974 and Section 232 of the Trade Expansion Act of 1962.”

As TIME’s Ian Bremmer has outlined, Trump’s calls for punitive tariffs against China (and in previous cases, Mexico) could have consequences in the United States. According to a Moody Analytics model of Trump’s proposals for tariffs against China and Mexico, which assumes the two countries retaliate on American imports, the U.S. would fall into a recession, four million American workers would lose their jobs, and 3 million jobs that would have been created will be lost. The U.S. economy would be 4.6 percent smaller by 2019 than it otherwise would be, and unemployment would rise to 9.5 percent in the same time. 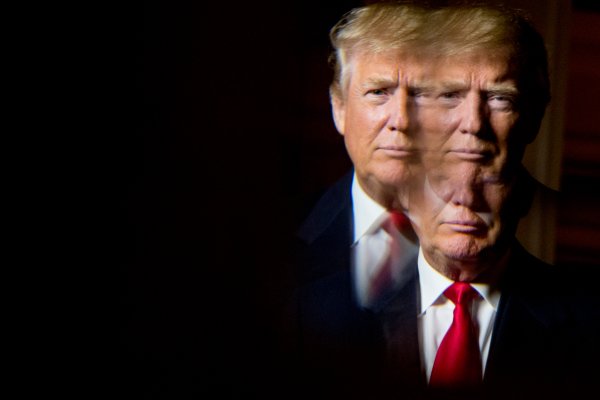 Trump Declines to Clarify Immigration Positions
Next Up: Editor's Pick