A new poll finds Hillary Clinton leading Donald Trump by eight-points in key swing states.
Bloomberg via Getty Images
Ideas
By Ruth Whippman
Whippman is the author of America the Anxious: How Our Pursuit of Happiness is Creating a Nation of Nervous Wrecks, out Oct. 4

You can safely assume that if an activity is described as “empowering,” no one in any actual position of authority will be going anywhere near it. Creating a Tumblr of photos of your bikini body journey? Empowering! Yet we are unlikely to ever hear the President gushing: “I’m finding these nuclear launch codes so empowering.”

The word has taken on a kind of ubiquitous vacuousness, with virtually any act performed enthusiastically by a woman—from washing your hair to contouring your vagina—now officially designated as “empowering.” As The Onion put it: “Women Now Empowered by Everything a Woman Does.”

But while the background noise of “empowerment” has been embraced by everyone from Unilever to the Republican Party, this frenzy has done almost nothing to change our genuine structures and understanding of power and authority. Empowerment has become the sparkly pink consolation prize for the gender that continues to be excluded from actual power.

Women are still drastically underrepresented anywhere that genuine power resides, and there has been precious little movement on that front in years. Despite our professed enthusiasm for the cause of female empowerment, many of us apparently still feel oddly put-out by the reality of actual women seeking meaningful power.

This squeamishness has found its natural expression most recently in the spew of verbal sewage directed at Hillary Clinton from both the right and the left. The Clinton-versus-Trump race is almost an ad absurdum example of this principle, as though cooked up in some kind of psychology lab to test to just how far the double standard can stretch. She is one of the most credentialed presidential candidates in history; he is a preposterous pumpkin-hued caricature of mendacity and misogyny. Yet still she is the one branded a liar and vilified as uncaring and unsupportive to women. He makes gleeful public boasts of buying off politicians for favors; she is the one labeled as corrupt. A Trump-campaign meme recently circulating on Facebook suggested that at age 68, Clinton was too old to be the President. Yet Trump is two years older than she is.

As writer Sady Doyle pointed out in an essay for Quartz, Hillary Clinton’s approval ratings over time have followed a consistent and somewhat depressing pattern. As a general rule, people rate her highly while she is actually in office, but revert quickly to all-out hatred when she starts campaigning for her next, more powerful post. As Doyle put it, these swings demonstrate the American public’s “continued prejudice against women caught in the act of asking for power.”

This ambivalence is underscored by a Harvard study showing that both men and women perceive campaigning female politicians as uncaring and unsupportive, while admiring their male counterparts doing the exact same things for their strength and assertiveness.

By rights, our collective infatuation with the cause of “empowerment” should be the perfect pushback against these sexist norms. But not only has it failed to make any substantive change, it has somehow subtly made the whole problem worse.

“Self-empowerment” has steadily become the rallying cry of mainstream feminism, a kind of corporate-friendly, non-threatening feminism-lite. In its hyper-individualistic worldview, “empowerment” does not mean a material gain in status or influence, but a feeling of inner potency. And in advising women how to maximize these feelings, the feminist movement has started to sound like a branch of the self-help industry.

Lean In! Adopt power positions! Negotiate a raise! Walk tall! Stop apologizing! Think positive! Be assertive! The message is clear: If you want to feel empowered, you need to be improved. Although couched in the language of self-celebration, this brand of empowerment feminism can easily morph into a nasty strain of victim blaming.

Sexism, in this story, is not the fault of the patriarchy or systemic injustice, but rather a regrettably unavoidable consequence of the fact that women are a pathetic bunch of compulsive apologizers with vocal fry.

So instead of calling out companies for illegal wage disparity, we blame women for being “bad negotiators.” Rather than targeting men for their domineering manner or failure to listen, we send women on assertiveness training courses. And God forbid that we should ever blame men for any aspect of gender disparity. The “Man-Hater” is the most terrifying straw-man feminist of them all, and empowerment feminism has internalized her specter as the ultimate cautionary tale.

But as long as we buy into this story, in which feminism is a feel-good anthem and women are to blame for their own oppression, the genuinely powerful woman will remain an uncomfortable exception. Clinton might make it to the Presidency, but it will be lonely for her up there at the top. 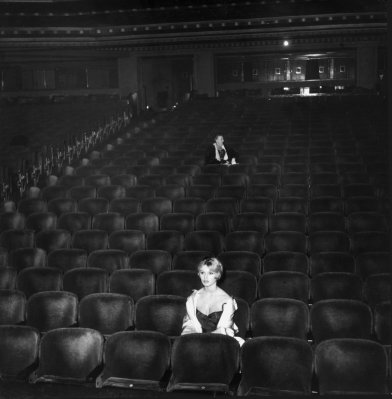 The One Way You Can Improve Your Moviegoing Experience
Next Up: Editor's Pick