Training for the Olympics Taught Me the Secret to Life

Anders Weiss (left) and Nareg Guregian (right) compete at the U.S. Olympic trials for pairs rowing at Princeton on June 22, 2016.
U.S. Rowing
Ideas
By Anders Weiss
Weiss will represent the U.S. at the 2016 Rio Olympics in the men’s rowing pair event

Graduating from Brown University in May 2015, I thought I had worked hard. As a member of the varsity men’s crew team, I had rowed more than 50 competitive races, run more than 1,000 loops of Providence’s steepest hill and put in more than 2,000 hours of training at the boathouse. I had competed next to incredibly talented athletes on a daily basis. But it wasn’t until I was cut from the U.S. men’s national team in May 2016 that I truly came to understand the difference between working hard for work’s sake and working hard for the purpose of improving.

I started rowing my sophomore year of high school when my older sister, Petra Weiss, and her freshman-year team at Brown won the NCAA national championship. The main draw for me in rowing was the competitiveness: this is all of me against all of you. I wasn’t the best at the start, but with a lot coaching, I started winning more and more, and that drove me to work harder.

The summer after my sophomore year of college I participated in the national team for athletes who were 23-years-old and under. The assistant coach told us he expected to see some of us in the 2020 Olympics, but I had my eyes set on 2016, and my coach at Brown University, Paul Cooke, said I could do it.

In the fall of 2015, I got the invite to go to Princeton, N.J., to train with the U.S. national team and compete for a spot in the two large team races: the eight-man boat and the four-man boat. At first it was hard—here I was, this new guy, surrounded by older guys who were incredibly talented and experienced. But with them mentoring me, I started to gain speed much more quickly than I would have if I were by myself.

When the coach told me I’d been cut from the larger boats and would have to compete for the final two spots in the pair’s competition, I was devastated. But that’s life. It’s not always roses and pearls. The way I see it, going to the Olympics is a big dream, and if you don’t have some lows amid the highs, it’s not a dream worth pursuing.

On my drive home to Rhode Island after being cut, I listened to a Freakonomics podcast about how to be more productive. I used to think that the talent I inherently possessed largely determined my success. But this podcast suggested another mindset: If you think success is predetermined by talent, it becomes a product of something you can’t change. But if you look at it as a product of hard work, then it’s up to you to control the outcome.

I knew I had to be more intentional about the work I was putting in, as the athletes I would compete against were just as talented, if not more so, than I was. The only way I would secure one of the final two spots for the Olympics was to work hard with a purpose.

This idea is something my partner, Nareg Guregian, already understood. As I met him at each practice with this new mindset—the idea that we controlled our success rather than it being predetermined by our natural abilities—we picked up speed. I made greater strides in the last month of training than I had in the prior eight months on the national team.

Last week, Nareg and I defeated nine other pairs to represent the men’s U.S. rowing team in the pair’s competition at the Rio Olympics. When we crossed that finish line, I was ecstatic. This is what we had worked so hard to accomplish.

Because of the example Nareg set from day one and this radical shift in my mindset, we are ready to race for our country in Rio this August. As Louis Pasteur said: “Chance favors the prepared mind.” We are prepared, and we are working with a purpose to bring home a medal. 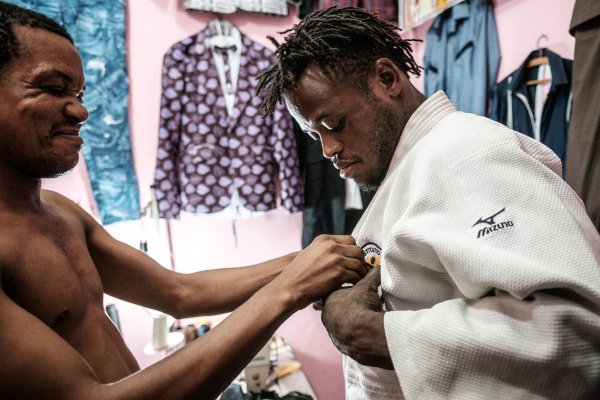 Refugees Team to Compete at Olympics
Next Up: Editor's Pick