A foster child has an inhaler directed to his mouth so that he can ingest a medicated mist. The boy's mother used crack cocaine during her pregnancy. This photo ran in a Boston Globe story titled "Crack's Costly Legacy on Babies" in 1990.
Boston Globe—Boston Globe via Getty Images
Ideas
By Hernandez D. Stroud

Stroud is a fellow at the Information Society Project at Yale Law School.

In The Souls of Black Folk, the sociologist W.E.B. DuBois posed a piercing question: “How does it feel to be a problem?” DuBois wasn’t contemplating the problems of people; we all have them. Rather, DuBois was spotlighting that a person’s very own existence—particularly a black American’s during Jim Crow segregation—can be a problem that others wish to control. Over eight decades later, when crack ripped apart American inner cities and crept into the wombs of women, DuBois’s question for poor, black mothers-to-be wrestling with drug addiction seemed as poignant as ever: “How does it feel to be a problem?” Another few decades later, it reverberates in the heroin crisis of today. But our collective response to this newer affliction—which is similar in all ways except that it affects mostly whites—reveals the ongoing struggle of black folk to achieve basic humanity and equality.

In 1985, the New England Journal of Medicine published a provocative study led by Dr. Ira J. Chasnoff that linked smoking crack while pregnant to a panoply of catastrophic effects on infants. The dubious study, which was ultimately discredited for failing to examine the influence of poverty, spawned hysteria.

We offered the veneer of pity for a lost generation of black crack babies; we said their “biological inferiority [was] stamped at birth.” Truly, though, we feared them. Supposedly, black youth were going to develop into goons and gangbangers, savages and “super predators.” But most of all, we loathed poor, black drug-addicted mothers more than we did the demon drug itself.

By the time Dr. Chasnoff recanted his findings, it was too late. The American establishment had already declared an invidious war on poor, black pregnant crack addicts, based largely on ignorant science. Never had America appeared to care more about the wellbeing of black newborns, while black mothers were caricatured as selfish welfare queens of godless ghettoes.

Prosecutors and police officers were highly effective, eager to kowtow to the nostalgia of some older order. Some states, like South Carolina, singled out and surreptitiously drug-tested poor, black expectant mothers, not for the welfare of the mother or fetus, but only to turn them over to police for arrest. Across the country, hundreds of black women were jailed, treated as personae non grata. And the mass incarceration of black mothers—reminiscent of slave masters’ control of slave wombs—decimated black families. These prosecutions contributed to the broader carnage of the War on Drugs, a war directly responsible for today’s burgeoning prison system of mostly black and brown people for low-level, non-violent crimes. Even when I radiate privilege by wearing my Yale Law School sweatshirt, my young black maleness still engenders so much deep-seated distrust that some older women clutch their purses around me: a searing reminder of how it feels to be a problem.

But get this: During the crackdown on crack, illicit drug use among pregnant white women was equally prevalent; and most black addicts’ births were healthy. Thus, in many respects, what actually drove the nation’s war on crack addiction during pregnancy wasn’t babies’ welfare. It was the mothers’ blackness—the true problem that had to be dealt with.

Over 40 years later, America is again combatting drug addiction during pregnancy, specifically heroin. Every 19 minutes, a baby is born dependent on opioids. Heroin death rates, which nearly tripled between 2010 and 2013, have reached a scale of mortality unseen since the peak of the HIV/AIDS epidemic two decades ago. Today’s drug scourge is striking both suburbs and inner cities, both rich and poor. But the vast majority of addicts have one thing in common: They’re white. And our national attitude towards them is markedly different than it was towards black crack addicts in the 1980s and 90s, particularly poor, black mothers.

Now that maternal drug addiction has a whiter profile, cops and communities recognize those afflicted as sisters and daughters. “This is not a moral failing. This is a disease,” declared Republican Gov. Chris Christie of New Jersey, whose own mother is grasping for cures to addiction. Congress passed on Wednesday the most sweeping comprehensive drug addiction legislation in decades, which, among other things, expands prevention, seeks alternatives to jail, and calls on prisons to treat its addicted inmates—a far cry from the militarized over-policing, Nancy Reagan’s “Just Say No” campaign and the iron-fisted mandatory minimum sentencing laws the federal government doled out to poor, black crack users back then. Researchers, by and large, have refrained from making any conclusions about the effects of prenatal opioid use. Deeply conservative states, like Alabama and Tennessee, which have historically led on the criminalization of pregnant women’s drug use, are now abolishing or softening punitive policies in favor of treatment. We haven’t seen—nor will we ever—an entire generation of white babies be regarded as criminals-in-waiting. More important, even prosecutors and police officers, like former undercover detective Eric Adams of New Hampshire, who once viewed addicts solely as problems to be locked up, suddenly think they’re “people” who “have a purpose in life.”

Is today’s compassionate approach to prenatal drug addiction cause for celebration? Of course. But imagine the bitterness perhaps felt by our black sisters, peering from the shadows, who got shackles—even during labor—instead of support. Their families are still splintered. Their lives are still languishing behind bars. And their babies, who’ve been left pondering whether their lives matter in today’s suffocating environment, are still perceived as problems to be handled. 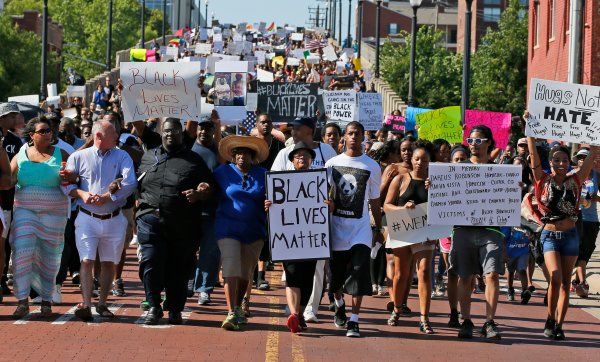 How a Group of Asian-Americans Is Spreading Support for Black Lives Matter
Next Up: Editor's Pick