With Fantastic Beasts and Where to Find Them coming out in November, author J.K. Rowling has been gifting us with rich nuggets of legend and backstory on the ancient magical universe that she created in her Harry Potter books. Today, we’ve been blessed with a full chapter of original writing and an accompanying animated clip on the history of Ilvermorny, the U.S. equivalent of the famous British school of magic, Hogwarts — available to watch and read for free online.

The Ilvermorny story takes us all the way back to Ireland in the 17th century, where an evil witch kidnaps a promising young witch and imprisons her. But the young witch, named Isolt Sayre — a descendent of Salazar Slytherin, a famous founder of Hogwarts himself — escapes to the Americas on the Mayflower.

Once in the U.S., she encounters a number of unknown magical creatures (pukwudgies! hidebehinds! horned serpents!) and, with the help of a non-magical paramour, builds the school of Ilvermorny, a stone castle hidden atop a mountain in Massachusetts.

The clip is in the style of the famous Deathly Hallows storybook animation from the seventh Harry Potter movie: a dark fairytale of intrigue and battle. But you’ll have to read the whole chapter for the full details on Isolt Sayre’s story, which draws some unexpected parallels between the past and the more contemporary Harry Potter plot. We assume that some of the new magical creatures will appear in November’s film, too, as Eddie Redmayne (in the character of magizoologist Newt Scamander) adventures through the U.S. himself. 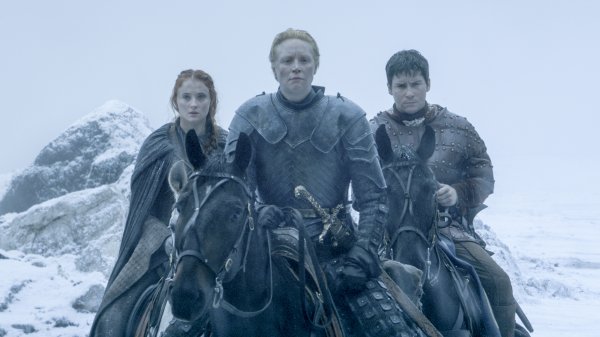 9 Books to Read About the Real History Behind Game of Thrones
Next Up: Editor's Pick