Pat Summitt never wandered too far from the Tennessee hay fields where she grew up doing her chores. The winningest Division 1 college basketball coach of all-time, with 1,098 victories and eight national titles over an incredible 38-year career at the University of Tennessee, was honest, accessible, and always put in the work. In a profession full of hucksters, Summitt, who died on Tuesday at 64 after battling early onset dementia, Alzheimer’s type, was the real deal. All of Summitt’s players who completed their basketball eligibility graduated. It could have always been about her. She was that good, that influential. But she never lost her curiosity about, and care for, others. No college coach was as important, or as transformative, as Pat Summitt.

When she first started coaching at Tennessee, a couple of years after Title IX was enacted in 1972, Summitt drove the van. Her team once slept in another team’s gym instead of actually splurging for a hotel room. As a fundraiser to pay for uniforms, she once held a doughnut sale.

By the time Summitt was done in 2012, the women’s Final Four became a nationally televised spectacle that filled NBA arenas. Summitt’s sideline intensity, and the ferocity and skill of her gifted teams, attracted fans and won her widespread respect. By simply going about her business, Summitt—the first women’s basketball coach to make $1 million a year—showcased the best of women’s sports. Her teams proved that women’s basketball should share an ESPN stage with the men. This visibility has inspired legions of girls to pick up a basketball, or a soccer ball or some other sport. In 1972, fewer than 300,000 girls participated in high school sports. When Summitt left the sidelines 40 years later, there were more than 3 million.

Her fight continued after she announced, in 2011, her diagnosis of early onset dementia. She coached one more season and started the Pat Summitt Foundation to raise research money for Alzheimer’s. “Put away your hankies,” Summitt wrote in a letter posted on the foundation’s website. “There’s not going to be any pity party. We’re going to fight, and we’re going to fight publicly.” In January 2015, Summitt’s foundation and University of Tennessee Medical Center announced a partnership to launch The Pat Summitt Alzheimer’s Clinic. The clinic is scheduled to open in December.

In 2012, President Obama awarded Summitt the Presidential Medal of Freedom, the highest civilian honor for an American. “Coach Summitt is an inspiration—both as the all-time winningest NCAA coach, and as someone who is willing to speak so openly and courageously about her battle with Alzheimer’s,” Obama said. “Pat’s gift has always been her ability to push those around her to new heights, and over the last 38 years, her unique approach has resulted in both unparalleled success on the court and unrivaled loyalty from those who know her and those whose lives she has touched. Pat’s coaching career may be over, but I’m confident that her work is far from finished.”

Pioneer, hoops junkie, millionaire coach unafraid to don a cheerleading outfit and start singing “Rocky Top,” Tennessee’s unofficial fight song, in front of thousands at a Tennessee men’s home game, or at a bar spending time with close friends. She was a singular presence; it’s hard to overstate Summitt’s impact. “In modern history, there are two figures that belong on the Mount Rushmore of women’s sports—Billie Jean King and Pat Summitt,” Mary Jo Kane, a sports sociologist at the University of Minnesota, told the New York Times in 2011. “No one else is close to third.” 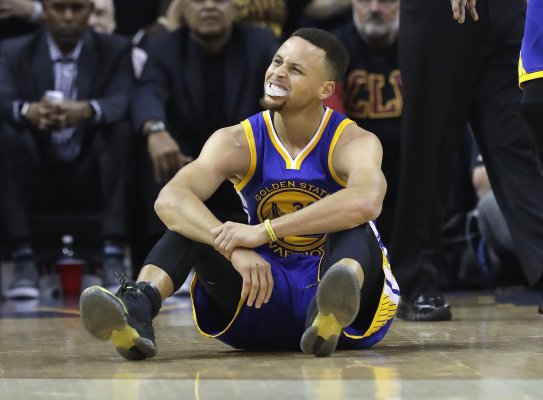 Stephen Curry Fined $25,000 for Throwing Mouthguard
Next Up: Editor's Pick