Over the course of Game of Thrones’ six seasons, Sansa Stark has moved from pawn and victim to major player in the game, taking control of her destiny to escape Ramsay Bolton’s sadistic grip and rally the Knights of the Vale to rescue Jon Snow and his Northern forces when they needed it most. She’s a survivor with a strategic mind — no longer just a young girl who dreams of being a princess.

So what’s next for Sansa, now that Winterfell is hers once more? Two illuminating conversations with her male counterpoints shed some light on the choices of the new Lady of Winterfell.

First, Sansa and Jon take a moment, as snow falls on the ramparts, to reaffirm the mistakes they’ve made — and their need to trust each other. In an interview clip from HBO, actress Sophie Turner notes that there’s always been tension between Sansa and Jon, thanks to her mother Catelyn Stark’s dislike of the boy she believed to be a symbol of her husband’s infidelity (which, we now know, is false).

“We can’t fight a war amongst ourselves. We have so many enemies now,” Jon tells Sansa. But although the moment is tender, it also foreshadows a bigger problem in their relationship. Snow, who has never had to play delicate political games Sansa excels at, continues to underestimate her power — instead just seeing her as a little sister, not a cunning politician in her own right, with her own ambitions.

“I think Jon is oblivious. He hasn’t actually learned his lesson from trying to pay attention to what she’s feeling. He says he has, but he’s asking her to trust him. He’s not listening and watching and observing her,” Kit Harington says of his character’s shortcomings. That could especially be a problem when we consider Sansa’s subsequent conversation with Littlefinger.

Sansa is alone in the godswood when Lord Baelish finds her. The scene echoes a pivotal moment in the pilot episode between Ned and Catelyn Stark, when Catelyn comes to tell Ned that his friend Jon Arryn has died (which is Littlefinger’s doing, as it happens). That death is what ultimately sets the series in motion, as Ned is thrown back into the path of Robert Baratheon and the Lannisters.

The conversation between Sansa and Littlefinger is, similarly, centered on a journey back down to King’s Landing. But this time it’s Littlefinger who’s seeking the Iron Throne — with, he hopes, Sansa at his side.

“That’s a pretty picture,” she says smoothly, rebuffing his declaration of love and seeming to confirm her lack of interest in returning to King’s Landing, leaving Littlefinger in the lurch. But not so fast: later in the episode, as the Northern bannermen all rally around Jon Snow and proclaim him King in the North, Sansa’s smile falters in the midst of celebration as she and Littlefinger share a look. In many ways, she is responsible for bringing Jon back to Winterfell and setting him up for victory. But there’s no credit given her — by Jon, or by any of the Northerners assembled in the hall — and, suddenly, Littlefinger’s offer might be looking rather more appealing. Will she be satisfied to sit in Jon’s shadow? At any rate, Lord Baelish has reminded her that there’s more to Westeros than Winterfell, and it’s all within her reach.

Sansa’s had a taste of true power. It’s unlikely that she’ll forget it. Jon Snow had better not forget it, either. 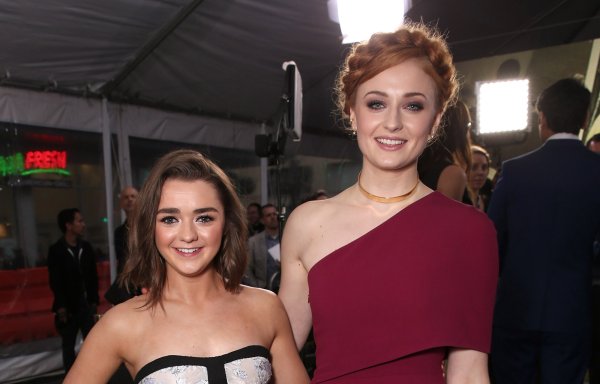 Watch a Young Sophie Turner and Maisie Williams Own Their Game of Thrones Auditions
Next Up: Editor's Pick