Donald Trump’s campaign is going out of its way to withhold clarity about the candidate’s shifting positions on immigration, as he appears to be softening his hardline stance on deporting people in the U.S. illegally and banning Muslim visitors.

In interviews this week, Trump suggested that he was no longer committed to forcing the mass deportation of roughly 11 million who have immigrated to the U.S. illegally, a position he has repeated in campaign speeches and debates since August 2015. He now says he would pursue an immigration policy that would focus only on deporting “bad dudes”—a policy that echoes the enforcement priorities of the Obama administration.

Trump did not specify which immigrants would qualify as “bad dudes,” and therefore be subject to deportation. He also would not name any nation that fell under the category of “terror countries,” saying only that “they’re pretty well decided. All you have to do is look.”

When CNN reported Monday that a new campaign immigration policy paper was forthcoming that would soften his stance on the Muslim ban, Trump spokeswoman Hope Hicks told TIME, “This is not accurate,” and declined to elaborate further. When the Associated Press asked Trump to clarify how he would identify muslims, Trump emailed a statement in response. “You figure it out!” it said in part.

If elected, Trump has promised to wage an “unpredictable” foreign policy, and much of his domestic agenda follows the same maxim. By staking out differing, sometimes opposing positions on the same issue, Trump keeps his opponents and even his own supporters guessing. The lack of clarity stems both from Trump’s own unfamiliarity with some complex policy issues—he fashions himself a big-picture and instinctual leader—but also represents an effort at deliberate ambiguity.

The latest immigration shifts suggest that the presumptive Republican presidential nominee is willing to embrace more centrist rhetoric before the general election. But it also marks the latest in a long line of instances in which Trump has dissembled, reversed himself, and walked back previous policy commitments, revealing an increasingly hard-to-pin-down platform just weeks ahead of the Republican convention in July. Trump appears to be betting that the confusion will allow him to appeal to all sides, while allowing him an out should the temperature of any one proposal get too hot.

In recent months, Trump has also appeared willing to negotiate on his long-standing plan, the cornerstone of his presidential run, to build a wall, paid for by Mexico, along the southern border of the U.S. In campaign speeches during the primary season, Trump often described the wall, popular among the Republican base, as bigger, taller, and more “beautiful” in each telling. But in recent interviews, it appears to be shrinking in size and grandeur, as polls show Republican voters in the general election are less enthusiastic about the wall than many primary voters. “Everything’s negotiable,” he told Fox News’ Sean Hannity in March. “I’ll be honest with you. You know, I’ll make the wall two feet shorter, or something.”

Trump’s dissembling on immigration, which has been one of the most solid planks of his platform, reflects a broader trend in his campaign in which he has repeatedly committed to a policy and then, in the matter of weeks or even hours, distanced himself from that it, while arguing that he has not, in fact, shifted positions. On March 3, for example, Trump embraced the idea of forcing U.S. military officers to employ torture methods, like waterboarding, that are widely seen as violating international treaties, and he repeated his position that “torture works.” “We should go for waterboarding and we should go tougher than waterboarding,” he said.

Then, a day later, on March 4, he released a statement saying that he would not, in fact, ask military officers to break international laws of war, but simultaneously appeared to remain committed to his previous statements. “I’m in total support of waterboarding. It has to be within the law, but I have to expand the law,” he said. “I’ll work on it with the generals.”

Trump performed a similar two-step after promising to authorize the military to “take out” family members of terrorists. “We’re fighting a very politically correct war,” he said in December 2015. “And the other thing is with the terrorists, you have to take out their families. They, they care about their lives. Don’t kid yourself. But they say they don’t care about their lives. You have to take out their families.” Three months later, in an interview on CNN, he said he didn’t mean that the military would kill terrorists’ families—only that he would “go after them.”

Trump’s policy platform again changed over the issue of abortion, when he suggested in an MSNBC town hall event on March 30 that women who get abortions should be subject to “some sort of punishment.” Hours later, he released a statement reversing himself: only the doctor who performs an abortion should be subject to punishment, he wrote, not the woman herself. But then he added that his “position has not changed.”

It’s common for politicians to change their rhetoric between the blustery primary season and the more staid and centrist general election. “Pivoting” from more radical policies to more inclusive ones is a tried-and-true move in the dark arts of politics. But most of Trump’s shape-shifting policy positions aren’t exactly “pivots.” Trump doesn’t move between positions on a linear spectrum so much he layers different responses atop one another, embracing a vast pallet of colorful language. The result is a muddled canvas of opinions, where so many competing colors are represented that both supporters and the campaign itself can point out whichever shade fits the mood of the moment.

The problem is that, less than three weeks before the Republican National Convention in Cleveland, Ohio, many voters aren’t certain where their presumptive nominee stands on everything from immigration and foreign policy to trade and the national debt. Even many Republican party leaders have been left uncertain about how to interpret the nominee’s latest terms of art. 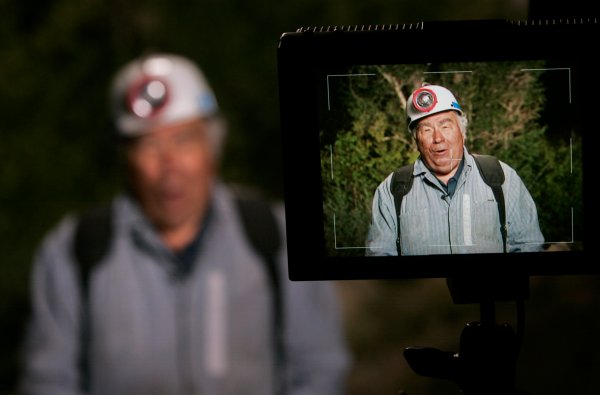