The day sure looked like the debut of the Democratic Party’s 2016 ticket. The pair coordinated outfits, spoke glowingly about one another, wrapped arms around each other and unified a fractured party at a crucial moment in this campaign.

Yet there remains well-founded skepticism that Monday’s campaign rally in Cincinnati was the start of a campaign in which Hillary Clinton selects Elizabeth Warren as her vice presidential pick. Yes, it made for a good rally. No, it doesn’t make Clinton’s path to the Presidency any easier. In fact, it could make it more difficult.

The room erupted in cheers. Clinton stood and smiled, her hands carefully clasped in front of her. She listened as Warren showered praise on her and eviscerated presumptive Republican nominee Donald Trump. “You know I could do this all day,” Warren remarked to the room and to herself, as if reminding Clinton that her talents are available.

“I do just love to see how she gets under Donald Trump’s thin skin,” Clinton said later.

By way of stagecraft, it was a made-for-TV moment that appeared like a by-the-books VP announcement. But it wasn’t, and the union will probably never come to be. Clinton will certainly lean on Warren to help prosecute the case against Trump and, perhaps, guide her agenda through the Senate. But the running-mate role is one Clinton is taking great care to pick, and Warren is not a leading option at this moment.

Clinton is looking most importantly at someone who can be Commander in Chief on Day One, someone who can manage not just the vast federal government but also the national security apparatus that has vexed other Presidents. It’s why Clinton ally Ed Rendell, a former Pennsylvania Governor, candidly told a Philadelphia radio host that Warren wouldn’t be in the running. “I think she will not pick somebody that she feels in her heart isn’t ready to be President or Commander in Chief. And I think Elizabeth Warren is a wonderful, bright, passionate person, but with no experience in foreign affairs and not in any way, shape or form ready to be Commander in Chief,” he told AM-1210.

That isn’t exactly the message the Clinton headquarters in Brooklyn wanted broadcast. But it wasn’t entirely wrong, either. Before she was elected to the Senate, Warren taught law at Harvard and was one of the nation’s leading experts on bankruptcy. Her advocacy has made her a hero of the progressive community, but it also is slightly ahead of Clinton’s pragmatic approach to running the country. “It’s true, I can be a little wonky,” Clinton confessed on Monday. Clinton’s careful deliberations could run smack into Warren’s aggressive reform agenda.

Officially, Clinton continues to consider Warren on her short-list of vice presidential options. Warren is too beloved among the left-leaning activists in her party, especially those who supported Clinton rival Bernie Sanders in the primaries and caucuses. But for each of Warren’s assets, there are concerns. A two-women ticket would certainly make history, although it might be too much for some voters who are skittish about the first female President. A Warren pick would shut off the Wall Street spigot of cash that has come to Clinton, and energize some bankers who are hardly hot on Trump. Should a Clinton-Warren pick win, a Republican would name Warren’s replacement in the Senate—and perhaps decide the balance of power in the upper chamber. (That calculation also could hurt Sen. Sherrod Brown of Ohio and Sen. Cory Booker of New Jersey. Sen. Tim Kaine of Virginia, by contrast, could see his replacement named by a fellow Democrat.)

Also, Warren might have a freer hand to attack Trump if she weren’t on the ticket. Warren has proved adept at provoking Trump as a charlatan and self-serving bully. “A small, insecure money-grubber,” Warren called him as Clinton stood there. “A nasty man who will never become President of the United States,” she added. Ahead of the rally, Trump took to Twitter to try to blunt Warren’s words: “Crooked Hillary is wheeling out one of the least productive senators in the U.S. Senate, goofy Elizabeth Warren, who lied on heritage.” Warren, who described herself as Native American in professional directories, has also been called “Pocahontas” by Trump.

Warren seemed ready with a fast comeback. “Donald Trump says he’ll make America great again,” she said, quoting his campaign slogan. “It’s stamped on the front of his goofy hat. You want to see goofy? Look at him in that hat.” Should she join the ticket, her attacks on Trump would become more scripted, more carefully planned if she were coordinating every utterance with Clinton’s team in Brooklyn.

Finally, there’s the personal dynamic between the two women. Clinton is no huge fan of Warren, her public statements and embrace Monday notwithstanding. Warren’s endorsement came at the end of the primaries, not early when it would have been more helpful. Warren could also over-shadow Clinton at rallies, much the way more people in 2008 turned out to hear Sarah Palin speak than her top-of-the-ticket partner John McCain. McCain’s team eventually had to schedule joint McCain-Palin events to gin up crowds for McCain. Clinton, who respects McCain and palled around with him when they were both in the Senate, saw McCain thrown off his game by the Palin pick. She does not want to see her running mate to do the same. 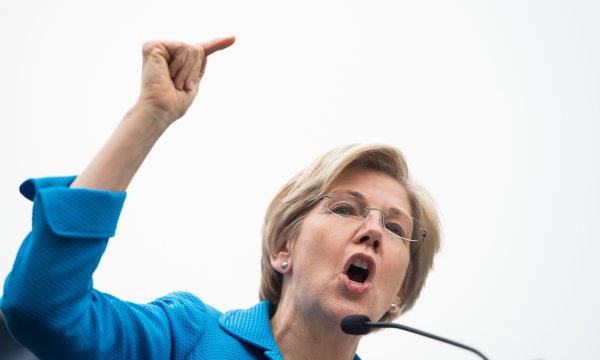