With her country split almost down the middle following Thursday’s Brexit vote to leave the European Union, Queen Elizabeth is likely “saddened” by last week’s turn of events.

But as head of state, does the Queen have any power to change the result of the historic vote – including possibly vetoing the move to leave the EU?

The Queen’s power lies within the advice and guidance she can give Prime Minister David Cameron in the coming days during their weekly meetings. (In the wake of the Brexit vote, Cameron gave an emotional speech announcing his resignation.)

The Queen calls a prime minister from the largest party in any election to create a cabinet and lead a government. She then leaves it to them, and acts only on the advice of those ministers and the prime minister.

“The U.K. has created a system whereby the monarch is not able to exercise power – although all power exists in her person,” constitutional expert Alastair Bruce tells PEOPLE. “The prime minister is the holder of all executive power, which she gave him.”

“She is an emblematic, human depository of all power but doesn’t exercise it. Arguably, that is how the British monarchy has survived.”

Like her forebears, the role of the monarch is to “be consulted, encourage and to warn,” as Walter Bagheot wrote in the English Constitution in 1867. (This might be especially pertinent for someone with more than 64 years of experience.)

The only possible time she might hold practical power is if she is deciding whom to call to lead a government in a coalition. But, even then, she would do so on advice and only when the politicians have come to an agreement about how they could make a government work.

Expert Andrew Gimson agrees that it would be “astonishing” for the Queen to intervene over Brexit in any formal way.

“A large part of our free press would be jumping up and down about it. It would probably be the end of the monarchy, so she wouldn’t do it,” says Gimson, author of Boris: The Rise of Boris Johnson, about the man who led the Brexit campaign.

Political writer and fellow Johnson expert, Sonia Purnell (who wrote Just Boris: A Tale of Blond Ambition), says, “We are so divided now,” that she wouldn’t be surprised if conversations were happening at the highest levels in the palace. “Intervening would be an exceptional thing to do and she would be loathe to do it.”

One thing is certain: Whatever the Queen has been telling Prime Minister Cameron, or others, it is likely to stay between them.

“We’re not going to know what she does, what she thinks and how she applies that influence,” adds Bruce. 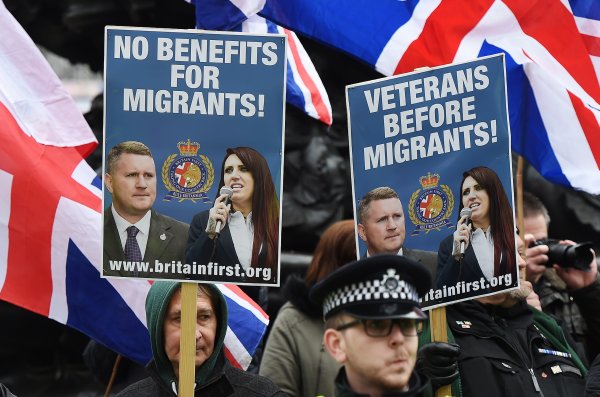 Surge in U.K. Hate Crime After Brexit Vote
Next Up: Editor's Pick