Courtesy of HBO
By Raisa Bruner

It’s finally happening: Daenerys Stormborn, Breaker of Chains and Mother of Dragons, set sail for Westeros Sunday night in the Game of Thrones season finale—after six long seasons of preparing herself for the big battle to come.

Emmy-nominated star Emilia Clarke spoke to Entertainment Weekly about the relief of moving forward in her path to conquering the Seven Kingdoms. She seems fairly invincible: Khaleesi now has three fire-breathing dragons, an army of Unsullied, the entire Dothraki khalasar, a clever Lannister Hand, and the support of the Iron Islands, House Tyrell, and the new leadership of Dorne. But the most important thing?

“She’s got the balls,” Clarke said. “And she also knows she’s got to go forward to help Meereen. She’s got to sit on the Iron Throne for the ripple effect. She knows she can do rule better than anybody else.”

Clarke also doesn’t think Queen Cersei, who just ascended to the Iron Throne herself, stands much of a chance against her formidable army. That said, there could be surprises in store.

“But as with Game of Thrones, you know when your character is looking good, that’s when you know you’re not safe,” she admitted.

Her character has also cleared the deck for future romance in Westeros, cutting it off with her sell-sword lover Daario Naharis (while Jorah Mormont remains far afield, seeking the cure to greyscale at her command). There also might be a family reunion in the cards, given last night’s big reveal that Jon Snow, newly-anointed King in the North, is actually her nephew by birth. So will they meet? 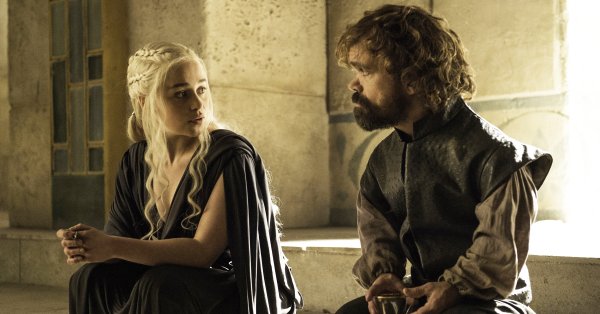 8 Cathartic Moments From the Season Six Finale of Game of Thrones
Next Up: Editor's Pick