The U.K. is suffering from a vacuum of leadership just as it enters what is arguably its greatest political upheaval since the end of empire and the establishment of the Commonwealth in the 1950s.

On Friday, David Cameron announced his intention to resign as Prime Minister until a successor from his Conservative Party can be found later this year. He was humiliated by the shock of Britain voting to exit the European Union in Thursday’s In/Out referendum. The Prime Minister had spent months renegotiating his country’s terms of membership in the hope this would be sufficient to persuade the electorate to vote to remain within the bloc.

It wasn’t, and now his party is divided over who should succeed him. The favorite is the charismatic former London mayor, Boris Johnson, who campaigned to leave, but plenty of M.P.s who backed Cameron would prefer A.B.B. – Anyone But Boris. The next leader will determine how the U.K. goes about leaving the E.U., though the bloc, badly bruised by the rejection, wants divorce proceedings to start straightaway.

Political logic would suggest that the turmoil in Government means that Her Majesty’s Opposition should be in excellent position to make hay by appearing united and authoritative. But that is not the case. The Labour Party is led by Jeremy Corbyn, the hard-left MP who shocked every pundit and politician, including himself, by trouncing his rivals for the leadership with nearly 60% of the vote last year.

Few of the party’s lawmakers wanted Corbyn to win. They don’t believe he has the broad appeal needed to lead Labour to a general election victory and have been plotting to oust him for months. Now, his enemies have struck. Two of his M.P.s, Margaret Hodge and Ann Coffey, have submitted a motion of no confidence, which their colleagues are expected to overwhelmingly back later this week.

Labour MPs believe Corbyn is partly to blame for the “Brexit” vote. While Labour’s lawmakers are overwhelmingly pro-E.U., Corbyn has a long history of liberal Euroskepticism. Although Corbyn eventually campaigned for the U.K. to remain, his many critics argue his support was too obviously lukewarm: asked on the campaign trail about how passionate he was about staying in the E.U. he answered “about seven or seven-and-a-half” out of 10.

Crucially, Labour failed to persuade its heartlands to vote to remain. Wales and the North of England went resolutely for Brexit, seemingly confirming fears that Labour has grown out of touch with the working classes in poorer areas.

Labour’s typical voters have been angered by high levels of net immigration, which hit 333,000 last year, the second highest on record. They blamed the principle of freedom of movement within the E.U. and have been flocking to the insurgent U.K. Independence Party, despite its hard-right policies on other issues.

News has leaked that Labour headquarters even told local branches to swerve the immigration issue by not even referencing this on referendum campaign leaflets despite protestations that this would leave the party looking “not credible.”

This has only hardened the feeling that Corbyn is out of touch with his party’s natural voters and now the Labour leadership’s critics hope this will force Corbyn to step down or at least trigger a fresh leadership contest.

Corbyn has sacked his critical but popular foreign spokesman, Hilary Benn, a move that has seen around half of his shadow cabinet quit in protest in addition to a growing number from the more junior ranks. Undeterred, Corbyn has filled the vacancies by promoting key allies who are to the left of the party, such as his former researcher, Cat Smith.

Lord Falconer, a former roommate of Tony Blair, was one of those who has resigned. The former shadow justice spokesman tells TIME that Corbyn has focused too heavily on international disputes when the country is still recovering from the turmoil reaped by the financial crisis.

“Jeremy’s causes are a million miles away from what concerns our heartlands,” says Lord Falconer. “He worries about foreign policy, in particular the Middle East, Trident [the U.K.’s nuclear submarine defences which Corbyn wants to scrap] and Syria. The focus should be on economic inequality since 2008 – our heartlands see pressure on the NHS, housing and school places as a result of more Eastern European immigrants.”

Stephen Kinnock, the son of former Labour leader Neil, quit his role as a Parliamentary aide. He adds that Corbyn is only used to speaking to people on the left who agree with him. Corbyn has made a virtue of this by portraying himself as a man of principle, but this has meant that he would not even share a platform with Cameron, a right-winger, during the E.U. referendum campaign.

Kinnock argues: “There is a leadership vacuum. While I understand that Jeremy had a large mandate when he won the leadership last year, the job description has changed.

“We need the Conservatives to agree to a cross-party approach to the negotiations on what the U.K.’s new relationship with Europe will be, with the Prime Minister leading and the Labour leader as deputy.

“But the whole point is that we need a credible person who is a hard-headed negotiator, and that means compromising with people you don’t agree with. Jeremy has spent his entire career in rooms and forums with people who agree with him.”

Another Labour lawmaker, who asked for anonymity, warned that if Kinnock’s point is not heeded, Labour could see itself “wiped out” in areas like the North. The party has already lost one of its major historical strongholds, Scotland, as a result of the nationalist movement there.

The loss of that area saw Labour collapse to a crushing defeat in last year’s general election. The party’s senior politicians thought this was the nadir – they now fear they were wrong, that Corbyn can only take them further away from power.

Meanwhile, the Government is in disarray and Labour is too focused on its own problems to seize on that advantage. 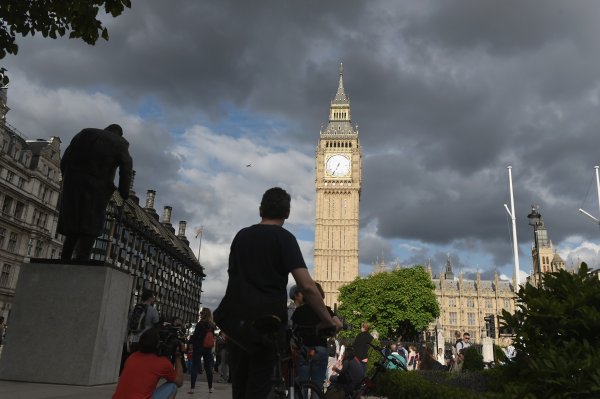 How Psychology Made the Brexit Vote Inevitable
Next Up: Editor's Pick